Bjarne Nielsen also known as Bjarne Kronborg gets the best of Denmark in his bar and restaurant Cafe Kronborg in Pattaya. It is all he needs from his home country, which he visits approximately every second year.

“I like being Danish but there isn’t really anything about Denmark I miss as such,” says Bjarne.

Everywhere you look in Cafe Kronborg, there is stuff. The walls are full of pictures, stickers and balloons from a passed birthday party. There is also a shell from a sea turtle, a large buffalo head and antlers from some type of deer. There are flags from all over the world and Dannebrog (the Danish flag) is especially used for decorating.

Outside, there is a hornbill bird, which gets as excited about wine gums as a Danish child. Unfortunately, Bjarne has no colourful sweets for the bird today, but he offers me salty liquorice instead. Cafe Kronborg did not always look like this. When Bjarne opened the bar with a friend 27 years ago after having to shut down their bar, Nyhavn, further down the street, there was not much decoration to see. Slowly, the walls have been filled little by little until the place looks like a mix between someone’s private home and an antique shop.

Upon entering Cafe Kronborg, I forget for a moment that I am in Thailand. I could have been in any old, brown pub in Denmark.

Above the table, where we are seated, there is even the mandatory Danish pub poster from 1900 advertising for Tuborg beer portraying an old man with a cane in a yellow frame, Den tørstige mand (The thirsty man).

Bjarne has a San Miguel Light placed in front of him on the floral table cloth.

Behind him a few men are watching one of the popular Danish comedian Anders ‘Anden’ Matthesen’s latest cartoons, Ternet Ninja.

They are waiting for the clock to pass 2pm when the weekly Saturday lunch will start.

A change of plans

Bjarne does not know who will show up. The lunch is an open invitation for his friends.

This Saturday, I get the honour of meeting Den norske hvalfanger (the Norwegian whale catcher), Den lille elefant (the small elephant), Bageren (the baker), Valhalla (owner of a bar in Pattaya by the same name) and Fiskeren (the fisher).

“I baptise everyone,” Bjarne proudly exclaims referring to the nick names of his friends.

His own nick name is Banana, which I am told has to do with Thai difficulties in pronouncing the name Bjarne.

A few of the men have a necklace with a pendant. Kronborg Castle on one side and Holger Danske, the fabled Danish statue packed away in the basement of the castle ready to protect Denmark if ever attacked, on the other side.

They wear it with pride and Valhalla tells me that he also has one in gold. The one around his neck is silver.

At the bar, Bjarne’s wife sits. He never imagined getting married, least of all when he was only in his early 20’s. But here they are, 40 years after meeting each other in Bangkok, only a couple of years after Bjarne moved to Thailand.

Back then, in 1977 he had been sailing for three years earning himself the title of able seaman, when he decided to make the move.

“I was young, and I had big ears. The tales of Thailand caught my curiosity. The Danish seamen on the Thai ships were closer to each other than on other ships.”

The first time, Bjarne came to Pattaya was in 1978 when he attended school to become a union representative for the seamen’s union.

Bjarne was happy at sea, and he never even planned to stay in Thailand or to open a bar.

However, his plans changed when his wife got pregnant and he went ashore despite advice from his fellow seamen.

“‘Don’t you think it it’s time to disappear?’ people asked. But you cannot just do that,” says Bjarne who later had two more children with his wife. All three children are in their 30’s now.

Today, he cannot imagine not having the bar.

Of all the lunch guests at the round table, Bjarne has been in Thailand the longest. Though not all of them live in Thailand for the entire year, they can all agree on one thing.

“Once you come to Thailand, you stay in Thailand.”

Inside jokes and tricks

One tray of food after the other is carried out by a few waitresses whom also take drink orders. Beer and schnapps appear to be popular among the noisy but happy guests.

In between bites of pickled herring, liver pate, eggs and roast beef with crispy onions and remoulade on rye bread as well as imported Canadian crayfish, the men cheer about every five minutes.

“I am so happy that I’m not sad,” someone proclaims. 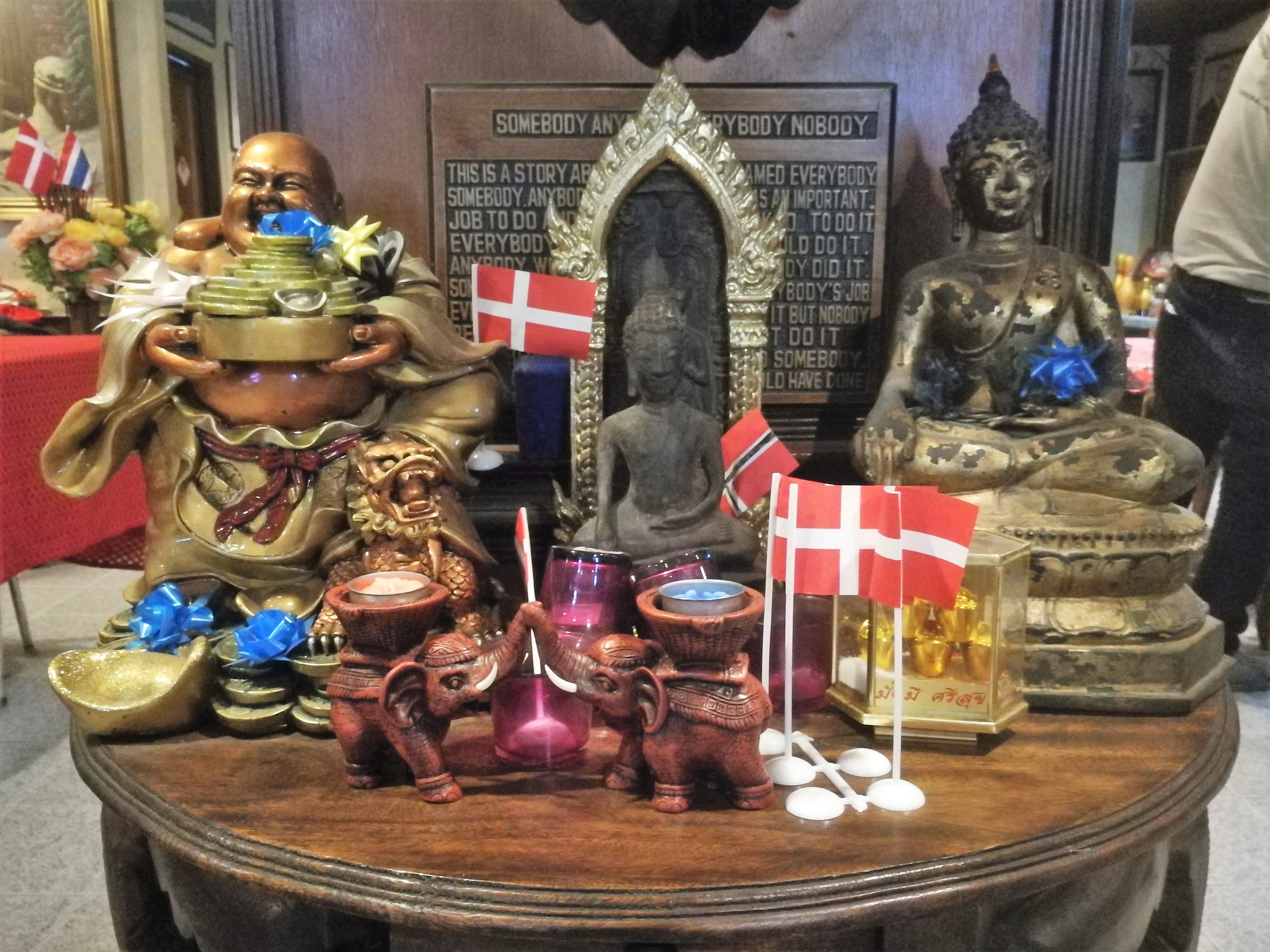 It is apparently a gentlemen’s lunch, which I as a woman am allowed to join exceptionally. But it appears to be more lunch than gentlemen.

They are especially fond of picking on Bageren today after a few classified episodes the previous night, which are unfit for a written article.

Valhalla, who sits next to me, constantly turns to me and apologises for the stories.

But though the stories are below the belt, their behaviour is just as decent as the spirits are high and the cups are full.

On my other side sits Fiskeren. He is less apologetic. Perhaps because of his first impression of me where an evil look told me that he is definitely not from Frederikshavn in Northern Denmark. They tricked me into asking him to much amusement for the remaining guests.

I still do not get the joke. Perhaps you have to be from that part of Denmark or a regular at Cafe Kronborg to understand. But I will never forget, that Fiskeren is from Skagen – also in Northern Denmark.

The second time the gentlemen tricked me, I ended up buying the table a round of drinks after opening an old pirate-looking chest letting out a loud scream – the chest, not me. It did not contain any gold, but I will let you visit Kronborg to see for yourself what is really inside of it. It will sure make the other guests happy. “The Danish community is tight out here. We always help and support each other,” says Bjarne about his friends who laugh about the incident for a while after finishing their drinks.

He says that they celebrate all the major festive seasons such as Christmas and Easter together.

They even get together for beer on 1 May to celebrate Labour Day, where they “drink in protest” according to a laughing Bjarne.

To Bjarne’s dismay, the community is getting smaller, though, and Cafe Kronborg is not as packed as it used to be. In its early days it was located outside of Pattaya, and people complained that it was too far away, but they would still come. Slowly Pattaya grew and today, it surrounds the bar which is now in the middle of the city.

But the past 10 years there has been a steady decrease in visitors. Bjarne is not the only one to blame the decrease on the strength of the Thai Baht as well as immigration laws for the negative development.

“You learn to tread water, if you cannot swim,” says Bjarne as he is trying to stay positive and hoping that times will get better.

For now, he is thankful that he has his close friends and regulars. And for his Saturday lunches which are sure to put enough smiles on his face for the next week.