The Season so far

The Kuala Lumpur Vikings have been playing in a new league this season, the Weir Veterans Football League. So far, the team is reasonably on track, placed 4th out of 10 teams after 12 rounds of play in a double round-robin type. With 7 wins, 2 loss and 2 draws, the KL Vikings still have six more games to move up the ranks.

“Satisfied with the current position, looks like the championship might be lost to KL Galaxy who has been having a very strong season. The fight for second place is still very open and I believe with a strong finish to the season can finish second,” said KL Vikings coach Rune Larsen.

He added that the overall the new league has been very successful in creating a great framework for a social league, including several social events where players across teams have made new friends.

“The commitment from organizers and sponsors is fantastic and with a few tweaks for next season we can make this the best league in KL,” he said. 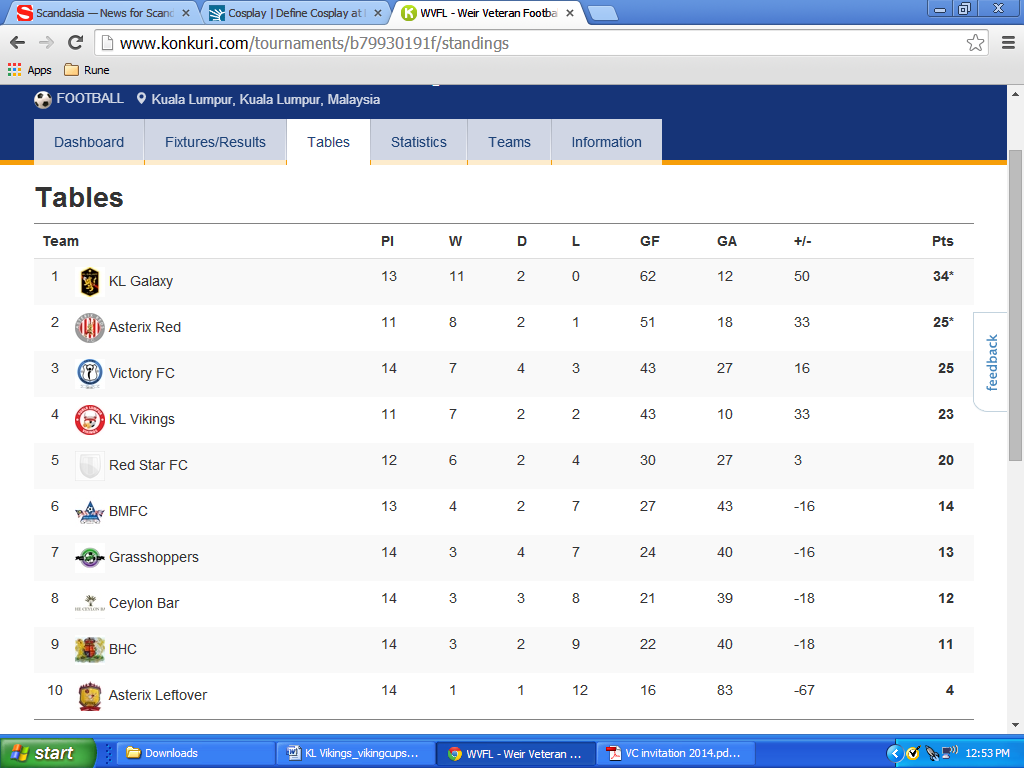 The Cup is ours in Shanghai!

After long months of carefully planned preparation, the KL Vikings will head towards Shanghai, China, for the 25th edition of the Viking Cup from April 17th to 19th.

They have one aim in mind; and that, is to leave the Republic as Champions of Asia’s most famous expat league; which proudly celebrates its 25th Silver Edition this year.

The KL Vikings last won the Viking Cup at the 2010 edition in Singapore, and ever since then, the flame has not stopped burning to reclaim the taste of glory. They have the bragging rights more than any other team in the tournament – 10 times to be specific. Will 11 be a lucky number for the team?

“It could be. We have certainly implemented the right changes even as far as going to making a change to a new league so that we could field a stronger team. Additionally, something new that we started is having extra trainings on Thursdays. This is something that we have never done, so now we are meeting twice a week instead of one,” he said.

“After the games (on Thursdays and Saturdays) we would meet up for dinner and a beer or two. One of our goals this season was to strengthen the team dynamics outside the pitch, and so far, these social sessions have proofed to be fruitful. The team is much closer now, as the players learn a thing or two about their teammates apart from their positions on the field,” added Rune.

The Saturday night ‘bonding’ has also worked out to benefit the team in another way, as their regular haunt in the heart of Kuala Lumpur, the Havana Bar & Grill, offered to be the team’s sponsor after Havana’s manager noticed the team regularly making their appearance at its premises on one lucky night.

The Viking Cup has been organized at locations around Asia since 1990, and it is an Easter weekend tradition. Scandinavian Viking footballs teams from around Asia gather for three-days of football, celebrate old friendships and make a few new ones. The Viking Cup has always welcomed family and friends to its turf, and Viking players and supporters readily fly across continents to be part of the annual affair.

Typically, the opening day starts by welcoming Vikings and their families and friends by greeting them in the hospitality lounge, this time at the The Westin Bund Centre Shanghai, where all teams and guests will stay. This is the first starting point for free flow of beer. This is also the day where players and spouses pick-up their goodies’ bag, filled with sponsored items essential for the next couple of days.

At the opening dinner later in the evening, players and guests enjoy a casual get together at the hotel, and participating teams will introduce their line-up through specially prepared video presentations, most of which are usually done with some dose of good humor.

The much anticipated team draws are also done on this night, and immediately teams start assessing their chances against their opponents, and if sheer good luck is enough to bring to victory; especially with Carlsberg being served on draft at the pitch.

Teams play their opening matches at the Shanghai Rugby and Football Club, which is said to boasts first class facilities. The games will be played on 2×11 aside grass fields next to each other.

Kids have always been integral part of Viking Cup, and organizers have ensured that they too will be kept occupied with an onsite playground. This will certainly give mum a chance for some massage, also conveniently set-up at the playing grounds. To sum it up, it is nothing less than a festive environment at the pitch; with lunch and snacks also readily available for everyone, and shuttle buses to the hotel organized at timely intervals should you need to head back for a snooze.

End of play, and its off to the pools, where teams make their presence very much felt before heading out for their respective team dinners. This is followed-up with a meet up later with other teams at a pre-determined bar where the party continues late into the night.

Players come to the pitch with little sleep, more alcohol than blood in their streams, but still in high spirits.

The Plate finals, cup and bowl winners are determined.

Tonight is the big celebration for the 25th Silver Anniversary of the Cup, and host Shanghai Vikings have promised nothing less than a roaring time tonight.

The KL Vikings are proud to have broke the tradition of suit and tie at a closing night of aVietnam edition (nearly a decade ago) by dressing up as border patrols, and other teams followed suit the subsequent years and continue the tradition of cosplay to this day. Every year, each team dons a different costume.

Unfortunately, the costume for 2014 shall not be revealed and evidences of the above cannot be publicly shared in order to maintain the dignity of the corporations these players are employed by!

We can only guess what extraordinariness the Shanghai Vikings have planned for tonight’s gala celebration, but that aside, it is safe to predict that the respective winners of the 2014 Viking Cup will be announced and celebrated, milestones of players acknowledged and the host for the next year, kept a close secret till now, will also be unveiled.

The customary men and women’s beer drinking competition will also take place, with women outdoing their male counterparts most of the times.

Vikings and guests meet for the goodbye brunch, and with Formula 1 weekend coinciding, many are expected to head to the circuits. Here, the Vikings are grateful for the 3 days of games, friendship and great memories once again. Next Easter, they meet again at another country, but with the same force and enthusiasm that brought them together in the first place – the bond of the Viking spirit.