The 6th of June every year is always a great day for all Swedes to wave their blue and yellow flags as a way of celebrating their Nationaldagen or Swedish National Day. Swedes annually celebrate their National Day in commemoration of two historical events: King Gustav Vasa’s coronation taking place on June 6, 1523 and the end of the Kalmar Union wherein Denmark, Norway and Sweden were united together under a common monarch marking the beginning of Swedish independence. On the same day in 1809 was likewise the day Sweden got their Instrument of Government. On this day, there are also special ceremonies welcoming new Swedish citizens around the country.

The activities Swedes do during the celebration commonly include flag parades, plenty of music, food, drinks, readings of poems about Sweden and speeches from politicians. Swedish National Day festivities have not taken place only in Sweden but also happened around the globe including Southeast Asia in which the event organizer hosted the celebration as pleasant as it was in Sweden.

Apart from National Day, Midsummer is also one of the most significant holidays in the Swedish calendar and some Swedes may celebrate Midsummer Day on the same day with National Day. During the Midsummer period, Swedes usually celebrated Midsummer Eve between June 20th-25th in the countryside ahead of the Midsummer Day that will be held on the 22nd of June. The successful midsummer always involved flowers, Swedish Maypole dance while singing songs, eating potatoes and drinking unsweetened, flavored schnapps–key pillars of the celebrations.

Run from 11.30 am to 3.00 pm, the celebration was participated by about 50 guests coming in with their floral dresses for women and casual outfits for men to greet the high-point of the summer.

TSCC prepared menu featuring different kinds of Scandinavian style dishes and dessert to welcome their guests. Midsummer menu came in five sections. The first was cold section serving marinated herrings and home-smoked cold salmon. This is typically followed by salad station, bread and hot dishes such as Swedish meatballs, stir-fried “Pyttipanna” and Swedish mustard. For dessert, there were Swedish pancakes, ice cream and a variety of summer fruits and pies.

The ceremony was inaugurated with the speech from TSCC President Eric Hallin. He welcomed the guests and acknowledge for all supports contributed in helping run such a successful event.

“Thanks all of you for your fantastic support,” said President Hallin who also mentioned about TSCC’s previous event “Plogging Event” which was held on May 25, 2019 at Bangsaen Beach as a part of TSCC’s 30th anniversary celebration.

Aside from President Hallin, Ambassador of Sweden to Thailand Staffan Herrström also attended the event as a distinguished guest who gave a speech addressing the historical background of Swedish National Day and why it was so essential for Swedes to celebrate this day. The ambassador also highlighted a remarkable people-to-people relation which was the core of Sweden and Thailand’s bond.

He also took this opportunity to raise awareness of environmental issues to mark the World Oceans Day taking place at the same day of the event (June 8).

“Every second breath we take comes from the ocean which plays a major role for our health and existence and it was terrible to know that nowadays we have more plastics than fishes in the ocean,” the ambassador shared.

“Therefore, it is our responsibility to collaborate together to beat unhealthy environments in order to build a sustainable future.”

After the speeches, raffle game was started in which all winners walked away with the prizes worth in a total of 100,000 THB sponsored by leading Swedish brands operating in Thailand.

Earliest than others Asia countries, Consulate General of Sweden in Hong Kong teamed up with Swedish Chamber of Commerce in Hong Kong in organizing Swedish National Day and Midsummer on May 31, 2019 at PMQ in Central, Hong Kong.

Festivity greeted all participants who came in with their families, children and friends with a series of traditional activities enabling them to experience a traditional Swedish midsummer celebration.

Prior to the National Day, Embassy of Sweden in Singapore hosted the reception to celebrate the Swedish National Day on June 4 at the residence of Ambassador of Sweden to Singapore Niclas Kvarnström.

At the event, Dr. Puthucheary gave a speech underlining an excellent collaboration between Singapore and Sweden, the two nations that have been working together more than 50 years in several fields such as innovation, research and social policy matters.

Two days later on June 6, Embassy of Sweden in Singapore came together with SWEA, Svenska Skolan and SwedCham in hosting the actual National Day Celebration for the Swedish Community in Singapore.

The celebration was held at W Hotel where about 220 guests were welcomed with a traditional Swedish buffet, Swedish summer songs from the choir and Swedish musicians Kristina Ebbersten and Christina Wirdegren Alin. The children also took part and enjoyed themselves with several enjoyable activities.

In Phnom Penh, National Day of Sweden was different from last year because this year the Embassy of Sweden hosted the event under the main theme named “Effective social dialogue for decent work and sustainable inclusive economic growth” to support the Sustainable Development Goal (SDG) 8 on “Decent Work and Economic Growth”. 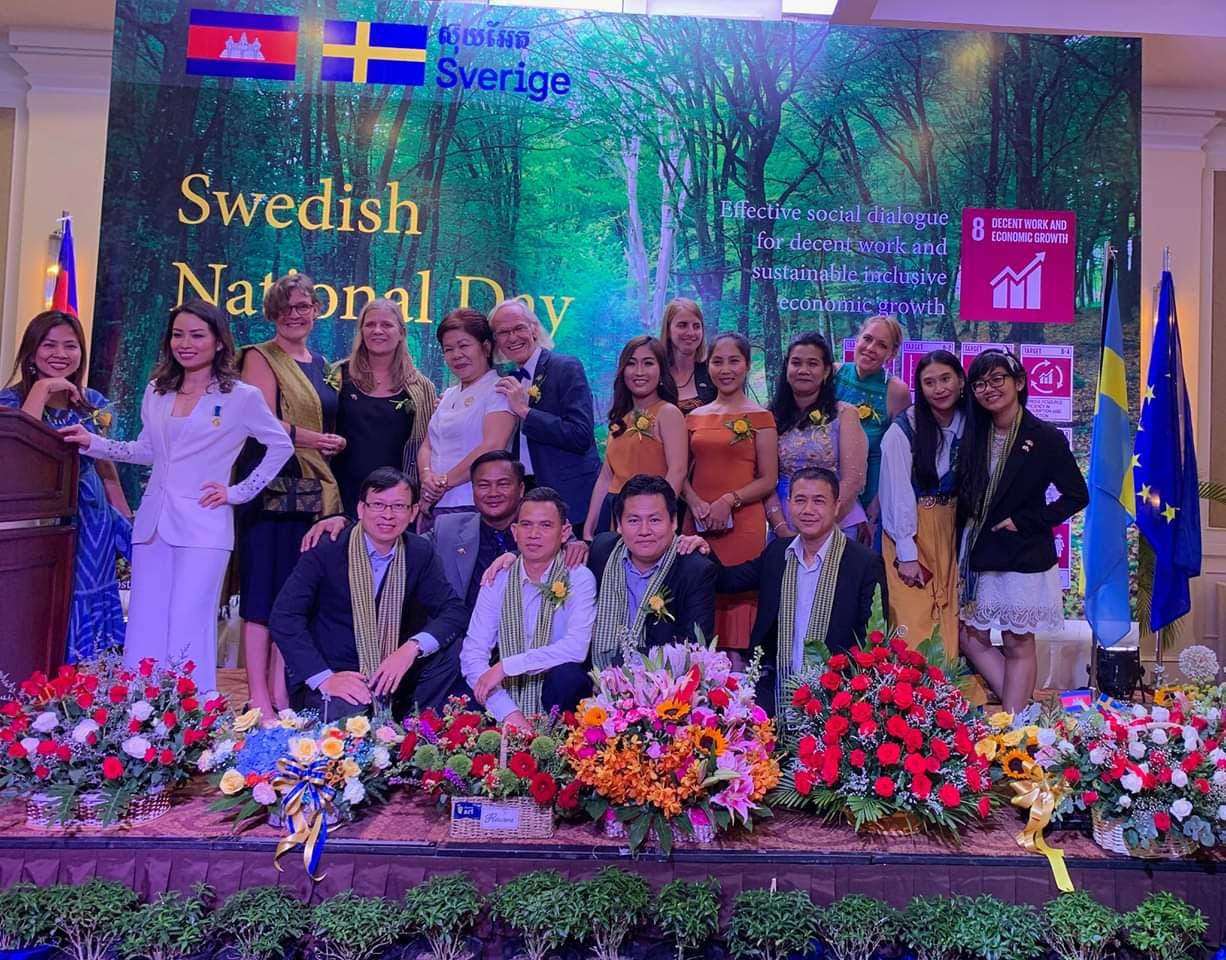 “In support of the celebration, six development partners of Sweden in Cambodia displayed their activities and achievements in Cambodia that have contributed to the implementation of SDG goal 8 as well as to the Global Deal, a global partnership of governments, unions and business, with the objective of jointly addressing the challenges in the global labour market and enabling all people to benefit from globalization,” Embassy of Sweden in Phnom Penh wrote on its Facebook page.

Taking place on June 6 at Raffles Hotel Le Royal, the celebration was attended by around 400 guests who join the event as representatives from the Nordic community, universities, alumni and government organization such as the Royal Government of Cambodia, Embassies, UN agencies, national and international organizations, civil society and Swedish citizens.

The guest of honor at the ceremony was the Ambassador of Sweden to Cambodia Maria Sargren who presided over the event together with Minister of Women’s Affairs Ing Kantha Phavi.

Swedish expats in Laos celebrated their National Day this year in Vientiane on June 3. The ceremony was presided over by the Ambassador of Sweden to Thailand, Lao PDR and Myanmar Staffan Herrström attending the event with his spouse Karin Herrström. The Guest of Honour also included the Minister of Public Works and Transport Bounchanh Sinthavong

“Great to see so many participants from the Swedish community in Laos. We will be back next year!” the Ambassador Herrström expressed his gladness through his Facebook account.

During the celebration, a short video of Greta Thunberg, aged 16, a Swedish climate activist, was presented to highlight her activism about global warming. There were also the art exhibition of “25 years of plastic” and the showroom of dresses in different recycled materials organized by Thant Myanmar to provide the guests with the knowledge on the way people can help the world through recycling.

“The evening was outstanding thanks to all the guests, speeches and great food. Until next time, we wish you a year with lots of environmental thoughts,” Embassy of Sweden Section Office in Yangon wrote on their Facebook’s page.