Skip to content
A slider with the ID of 20 doesn't exist.

Sapparot Group could very well be the name of a producer and exporter of Thailand’s tropical fruit pineapple. But no, we are talking restaurateurs, where the three Swedes formerly known from Flow Cocktail/Hyde & Seek in Bangkok have taken the next step, together with their American business partner Jared O’Brien, in their defining journey, now also strengthened further with more Swedes in the form of two bartenders (and that’s where pineapple can play its part) and a baker! Three own-branded Rocket Coffeebar outlets are up and running downtown along with a restaurant and a bar so far, while further expansion plans are on the horizon.

Just as Hyde & Seek was something ground-breaking locally, Sapparot Group is out to continue setting new standards, defining the scene and bringing doable, international, concepts to the table within the bar and restaurant scene. As fascinating and remarkable it may seem (given its large volume) the local dining and drinking scene still offers room for improvement.

Picking a niche, the Swedes this time around have turned their attention to the café culture, and brought with them quite a few Scandinavian touches (but forget Swedish flags and cheap branding.) – and looked beyond just serving coffee. While the coffee culture has boomed also locally few have come up with any thought-out concept. The Sapparot team, however, has dared to do it: introducing something new here based on international benchmarking and strongly believing in that they could fulfil a need. And with the quality these guys have in whatever they do, and putting in a genuine effort, Sapparot Group is at least dressed for success.

Thomas Anostam fills us in on their story and efforts so far, and the ship being built, but where Sapparot Group is becoming accustomed to a much larger suit and all that comes with it in terms of business decision-making and leadership.

The restaurant group they are building was in the plans already with the start of Hyde & Seek, but, after three year of operation the brains behind Hyde & Seek parted ways to continue on separate paths.

And often circumstances and pure chance define the path forward. This was the case in how their first three new outlets were born on soi 12, a side street to Sathorn road. They had looked at a management job of a larger project in that area, which did not happen.

“Then we felt that we had done a lot of research and had so much knowledge about the area that we wanted to utilize. We saw what was already happening and knew what was about to happen in the near future, in addition to some key projects with a long-term view, such as Mahanakorn. We then started looking around at what was available and found this house on Sathorn 12. And we wanted to do three smaller places complementing each other.”

Thus, Sathorn soi 12 became the new test bed for Sapparot Group and where the concepts and outlets Rocket Coffeebar, Lady Brett Tavern and U.N.C.L.E. cocktail bar were born, and also the beginning of the transformation of this backyard street. Soon enough luxury cars were lining up along the street, whose owners came for breakfast or a brunch at the Swedes’ new outlets, says Thomas.

“It’s fun to look back at, from having been a dead street to one which Ferraris and Lamborghinis arriving on weekends, with people standing in line for an hour to sit down for eggs and coffee! On weekends we served 300 people on 20 seats – from 7 am until 4 pm. It was non-stop, ourselves taking turns by the espresso machine and serving, without being able to leave for one minute!”

Rocket Coffeebar had become a happening place. Since then W Hotel, Sathorn Square offices etc. have opened, bringing further boost to the nearby area, with more high-end developments also in the works.

“We wanted to be a first-mover, and of course this comes with many advantages but one also has to carry a heavy burden when opening something in an area that is not yet a destination.”

Then it is to wait and see if others also open in the area – which is what they wanted. “We wanted to create a neighbourhood. And since our opening so many things have happened on Sathorn 12 and 10; boutiques, a gym, other cafés and restaurants, new-builds and renovations. Rents have skyrocketed and of course that has to do with the larger things too, but we could see immediate effects based on our small operation. People realised that something was happening in the area.”

The Sapparot team had seen opportunities and felt that something was lacking in Bangkok within the café segment, comparing not least with its strong position back in Sweden, where most get-togethers are held at cafés.

“It felt like there was no coffee outlet in a Swedish way where you can pick and choose. Yes, the coffee culture had grown strong in Bangkok – the entrepreneurship, the roasting, and many boutique coffee shops; many really nice-looking with really great coffee and clever baristas. But if one wanted something aside – pastries, bakery, cocktails, wine… there wasn’t much!”

And in Bangkok everything is a destination, Thomas points out, so it is important to be able to offer more than just one thing to serve the customers’ their needs.

“One rarely travel for half an hour or more for a cup of coffee, but one can do that for a coffee, a Smoothie, and something to eat, and then staying put, perhaps working a bit and later going over to a bottle of wine with tapas. Then it becomes justified to travel across the city.”

“This is what we saw as an opportunity, where we felt something was lacking here in Bangkok. A café that strives for serving Bangkok’s best coffee, but in addition puts all the love an effort into all the other parts that you today can find at Rocket. We wanted to generate that regardless of the time of the day. And regardless of what you crave for, you should feel comfortable to sit down here and know that the needs can be fulfilled in a nice way. That made an innocent child like Rocket with 20 seats into having just as large impact on Bangkok as Hyde & Seek had when it opened up, since, again, we fulfilled a vacuum.”

So far they have opened three Rockets; with ‘Coffebars’ also at Central Embassy and at Sukhumvit soi 49 – where the interior has a really bright, Scandinavian feel. 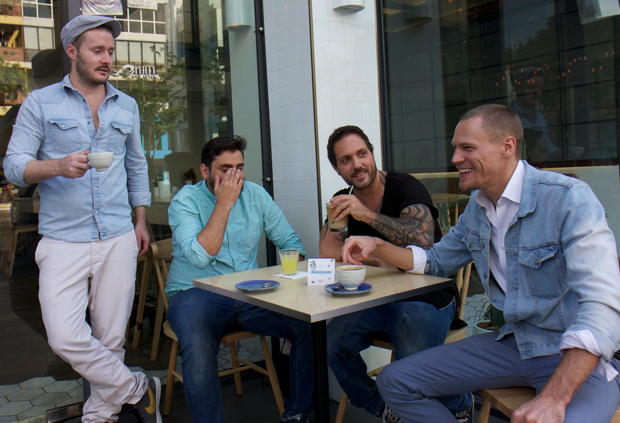 Guests who previously spent an hour’s trip through the city in order to reach Sathorn 12 are now also showing up at the other addresses that may be closer to home, as Rocket is branching out.

“As for the concept as such we talk about the three aces – Stockholm, Sydney and San Francisco – where we look at for inspiration, and more when it comes to the coffee culture in these three cities,” says Thomas.

“In Stockholm you have this ever present ‘fika’ phenomenon – Sweden’s answer to the English pub as the natural meeting point. Regardless of age, genus, if meeting friends or for business, on a date, studies etc. – the café is always the place to go and therefore the cafés back home most often become a one-stop shop.”

“That is the flavour we want to bring in here, but a bit more direct when it comes to some food – delivered in an elegant, beautiful gourmet style, so the international market can view this [Rocket] as something trendy and fresh rather than hardcore ‘Swedish Restaurant’ formula with Swedish flags and all the rest of it. Stockholm’s involvement in Rocket is more about the coffee culture vibe. And quite a lot of Scandinavian line in the design. And some bakery firsts for Bangkok: Mazarin pastries and cinnamon buns.”

“Should Bennie, Dannie, Jeff and I allow ourselves to be Swedish nerds completely there are no limits to what one could produce! But now it’s more about expanding quite fast and therefore things accelerate and are not always planned; opportunities popping up that one jumps on board, so also hunting one’s own tail on a daily basis.”

Sydney, meanwhile, represents an enormous passion for food and beverage. And with perfectionism.

“Australia, being very far away from everything else, takes inspiration from the entire world. And since they have so many resources and are so far away they create things themselves. Down under they have fresh produce to an unbelievably extent and all so robust. And I think that’s what has created such a passion among people working within this trade.”

“Sydney is a very unique city, with a vibrancy that is just beyond! And cafés … there are so many in Sydney doing it the way we also want, and in such a beautiful, effort-less way; open from 7 am, and even though being the same outlet transforming throughout the day and into the night, meeting various needs and wishes. You can come for a take-away coffee and a sandwich in the morning, and at lunch full of energy and socialising. Or for a relaxed afternoon coffee, and perhaps sundowner cocktails, or wine, after work.”

“And San Francisco is a leading city within third wave coffee; small cafés mushrooming up and battling with large chains. Plus they have a big passion for the farm-to-table concept.” We let Thomas end with a philosophical thought about their approach in their business conduct (in reflecting on how customers tend to see their food as ‘healthy’): “We produce things ourselves; putting our heart and soul in everything we do. At least one can feel good to consume these things with devotion, since we know all the ingredients in the products and where they originate and how they are made. For us that’s most realistic. We describe Rocket as ‘wholesome’ rather than healthy or organic, as those things are a whole different ballgame, which we’re only playing partly.”

And in the formula for success, and which is the big challenge, having the right kind of people is essential.

“It’s more about that than venue and equipment; it’s all in the hands of the people we are recruiting within the whole group. It does not matter how cool address and how nice the café is and expensive equipment you have; it is the staff that can take it further and make the product fantastic and living.”

This also requires being that demanding manager.

“One must stand up and be stubborn and dare to be that demanding, irritated person who is not satisfied with just O.K but that it should be top-notch every time.”

Three more Swedes have been brought into the team to deal with these demands: