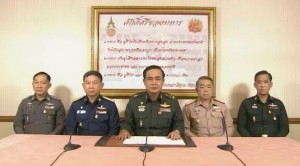 prevent escalation of potentially violent conflict, following a last-minute botched attempt to secure a viable political solution among rivaling parties on May 22.

In a televised announce around 5 pm local time, Gen. Prayuth said the military would restore order and implement political reforms.