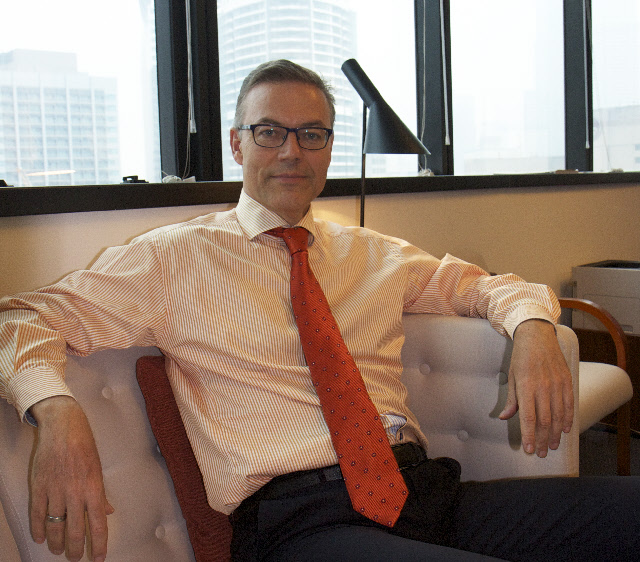 Into his fourth year as Denmark’s Ambassador in Kuala Lumpur Nicolai Ruge shares insights on dealing with and building relations in Malaysia, and the vibrant Danish-Malaysian business exchange and strong investment into the country.

The Ambassador arrived back in August 2012, when, coincidentally, all the Nordic countries had new head of missions appointed to Malaysia. For Nicolai Ruge it was very much his choice of heart to come here.

“I deliberately wanted to go back to this part of the world; I like the dynamics and the, quite extreme, diversity of Southeast Asia.”

His very first job in his early days was for the United Nations, working in very remote Papua New Guinea. Later, he also spent three years in Vietnam with the World Bank and the U.N.

“Hanoi was fantastic, I loved it. But it was still much undeveloped, only just opening up to the outside world back then, in the late 90’s”

Figuring out Malaysia
Kuala Lumpur is by far the most developed city the ambassador has been posted to.

“Quality of life here is pretty high, that’s for sure, and that’s why many people decide to settle down in Malaysia, under different schemes. At least a handful of former ambassadors have stayed on after their final posting in Kuala Lumpur or returned later for retirement.”

“I’ll be the first to say that I’m still trying to figure out how Malaysia ticks. It’s not a very straightforward country to understand – it’s got this fantastic ‘Malaysia truly Asia’ image, but the reality is that when you scratch a bit on the surface it’s a lot more complicated; having to do with the ethnic groups, the religious differences, the east-west Malaysia division, the urban–rural divide… there are lots of complicated dimensions!”

The Ambassador also mentions the 13 state governments with their different positions in the federation, and then on top of everything, the formality of the structure versus what actually takes place underneath.

Personal relations are of utmost importance in Malaysia, and those take time to build.

“You need to go and meet people individually and personally, and a number of times.”

Nicolai Ruge therefore agrees that the longer an ambassador is here the better in terms of generating results.

“There are other countries where you would get up and running more easily than here. And, as goes for the rest of this region, personal connections make a big difference. That’s a truth regarding doing business here but also for establishing inter-governmental relations. You may have a good offer but first they want to find out who you are.” Opening doors
But by building these relations and with a very formal society the ambassador can oftentimes help.

“Where I can make a difference is sometimes in opening doors. Malaysia is a country where titles and status means a lot. When an ambassador says he or she would like to have a meeting, it makes a difference, and I think companies in general appreciate that. Doing business here can be formalistic and bureaucratic sometimes. I know that on numerous occasions we’ve been able to give companies access to people they would otherwise not have been able to meet; that’s quite clear.”

“We certainly do accomplish a lot of things; we have these pretty specific KPIs for the trade work that we do and meet those year after year so that’s very satisfying.”
Danish businesses’ presence in Malaysia are increasing and expanding.

“A number of companies have established themselves in recent years and a surprising number of companies actually set up their regional representation here. Partly it’s so much more expensive in Singapore, so it’s cost-efficient to do it here and you have the same level of connectivity and IT infrastructure and so on. Among them are one of the largest companies in the Nordic region; Novo Nordisk.”

Novo Nordisk opened their new regional office in Kuala Lumpur in June 2015, and so did Arla recently. Radiometer Medical (setting up own distribution), GN Resound (setting up manufacturing in Johor) and Palsgaard (inaugurated a new emulsifier factory) are other recent highlights in terms of Danish investment and significant arrivals

“We would like to see that trade numbers increase but the point is that the companies establish themselves here not so much necessarily for the Malaysian market but they do it more for the regional market.”

Up in Penang, for instance Ambu and Fibertex have production and are expanding.

“I just want to emphasize that you may not see it in the traditional trade statistics between the two countries but of course it facilitates for the companies to grow, as they establish themselves here and have a good business. That is part of being a global company.”

The ambassador thinks that companies choosing Malaysia for their respective regional hub is increasing at the expense of Singapore.

“Also, I don’t think it is a coincidence that in the World Bank ease of doing business Malaysia is ranked as number 18 [Doing Business 2016]. That’s a very nice position. It’s is really up there and in all these rankings of attractiveness and so on it ranks very high compared to a country like Indonesia.” Potential for further trade boost
“As for Malaysia’s growth potential, one shouldn’t underestimate the improved relations with Singapore and the fact that the whole of Johor and the Iskandar region bordering Singapore is really being thought of as one city two countries, with much closer connections,” Nicolai Ruge points out. “Increasingly, companies put R&D in Singapore and manufacturing on the other side of the border. Singapore is expanding both road and rail connections into Johor and so on.“

Denmark is seeing the promise of a further boost in trade as Malaysia is now again eligible for IFU investment (Denmark’s Investment Fund for Developing Countries), after a revision of its mandate. IFU can invest, in general in Malaysia, offering new exiting possibilities for Danish companies who want to grow their business in Malaysia and the region.

“IFU is one of the investors in Danish Energy Efficiency Partners [see separate story], and we are very happy to see IFU come back into Malaysia as they are in a number of other middle income countries. And IFU is very interested in the Malaysian market; they have been here in the past and had several successful investments,” comments the ambassador.

Much can be done onwards on the green technology front, he believes, primarily in the major urban areas such as Kuala Lumpur, Melaka and Penang.

“It’s for instance something the State of Penang is also very interested in. They need to retrofit some buildings to reduce energy costs and they also need to be better at cleaning their waste water. We are in dialogue with KL, Melaka and Penang on Danish green technologies and possible collaboration with Danish authorities.” On the internal political turmoil in the country he recognises that there is a “linkage between the political situation and the economy. But there’s no tendency in Malaysia for the country to become more difficult to do business in – on the contrary; it’s an open economy and they want to trade. They have got FTAs with basically every economy in the region and they are one of only 12 members of TPP that has just been approved by Malaysia’s parliament, only awaiting the formal ratification to come into force.”

“These are examples of how willing Malaysia is to look outward for trade and make sure they remain as attractive as possible for Foreign Direct Investment. I must say that it is our experience that Danish companies who come here to set up shop find that they are being very well received. The Malaysian Investment Development Authority is doing a fantastic job and we have a very good collaboration in trying to make it clear for Danish companies what incentives you can get if you are looking into manufacturing or only interested in sales and marketing etc.. It’s very clear and generally very attractive.”