Not many places in this city reach the distinguished age of 155 years. Let’s visit a place of both historical and religious interest and importance that must be protected.

The solid brown iron gate, and the smaller door in the gate, are probably as old as the graveyard. Anyone taller than 146 centimeters must bend down to pass the narrow passage.

Behind another gate you find the old mortuary and the big antique wooden cart to carry us the short distance to our final destination.

I was trying to approach the hardly readable gravestone of the first Danish-born Consul to Siam, Frederik C. C. Købke, who died of dysentery and liver disease in 1881, just 44 years old. His wife Bolette is here too, she died from dysentery 1866, 27 years old. The gravestone is there, but the oldest part of the cemetery is swamped. I should have brought rubber boots.

But this is where he rests, the flamboyant Captain of the Sea and Consul, Lloyd’s agent, a passionate man who also enjoyed a whiskey and a play of cards. He was also a man who showed extraordinary hospitality and helpfulness towards his countrymen, rich and poor – not seen much these days.

It bears evidence to his popularity that his funeral was attended by all members of the Danish colony, except one. 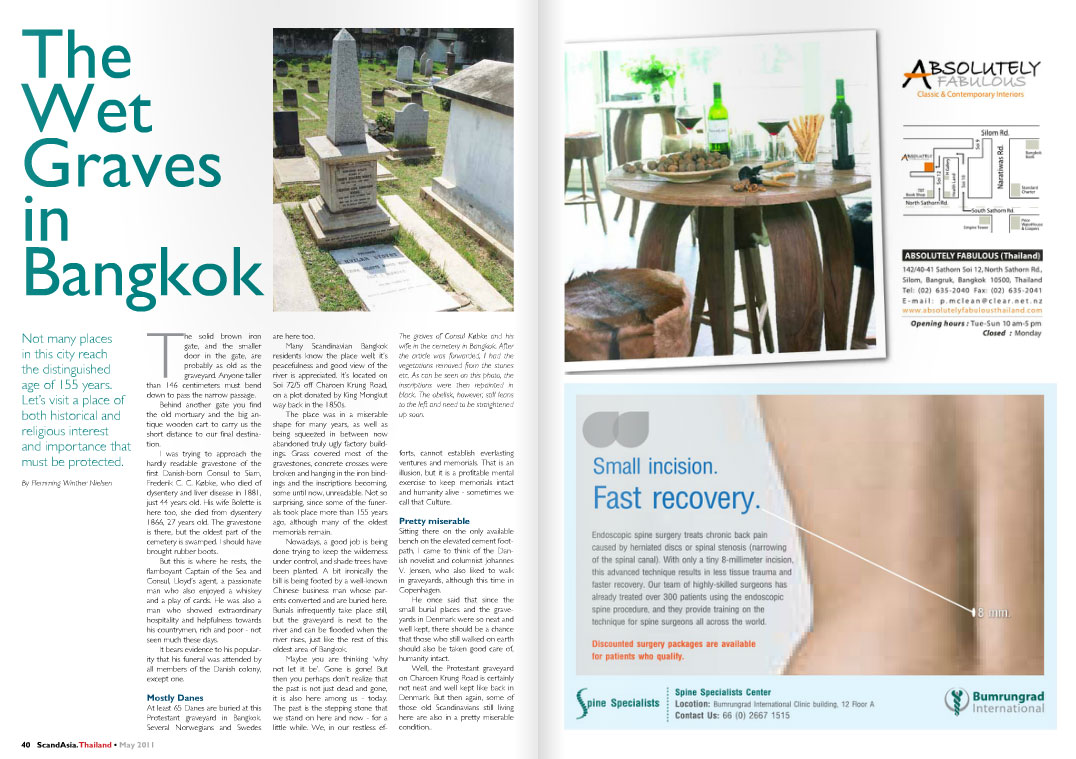 Mostly Danes
At least 65 Danes are buried at this Protestant graveyard in Bangkok. Several Norwegians and Swedes are here too.
Many Scandinavian Bangkok residents know the place well; it’s peacefulness and good view of the river is appreciated. It’s located on Soi 72/5 off Charoen Krung Road, on a plot donated by King Mongkut way back in the 1850s.

The place was in a miserable shape for many years, as well as being squeezed in between now abandoned truly ugly factory buildings. Grass covered most of the gravestones, concrete crosses were broken and hanging in the iron bindings and the inscriptions becoming, some until now, unreadable. Not so surprising, since some of the funerals took place more than 155 years ago, although many of the oldest memorials remain.

Nowadays, a good job is being done trying to keep the wilderness under control, and shade trees have been planted. A bit ironically the bill is being footed by a well-known Chinese business man whose parents converted and are buried here. Burials infrequently take place still, but the graveyard is next to the river and can be flooded when the river rises, just like the rest of this oldest area of Bangkok.

Maybe you are thinking ‘why not let it be’. Gone is gone! But then you perhaps don’t realize that the past is not just dead and gone, it is also here among us – today. The past is the stepping stone that we stand on here and now – for a little while. We, in our restless efforts, cannot establish everlasting ventures and memorials. That is an illusion, but it is a profitable mental exercise to keep memorials intact and humanity alive – sometimes we call that Culture.

Pretty miserable
Sitting there on the only available bench on the elevated cement footpath, I came to think of the Danish novelist and columnist Johannes V. Jensen, who also liked to walk in graveyards, although this time in Copenhagen.

He once said that since the small burial places and the graveyards in Denmark were so neat and well kept, there should be a chance that those who still walked on earth should also be taken good care of, humanity intact.

Well, the Protestant graveyard on Charoen Krung Road is certainly not neat and well kept like back in Denmark. But then again, some of those old Scandinavians still living here are also in a pretty miserable condition..]