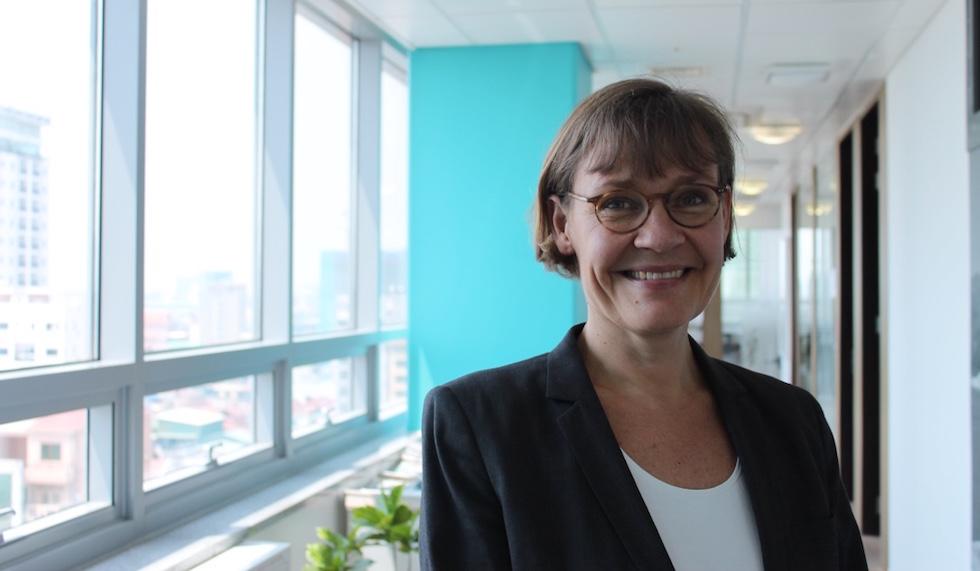 Going from working with development policies in the busy and lively EU capital, Brussels, to being an Ambassador in still developing country Cambodia is quite a change of settings. Maria Sargren has been the Swedish Ambassador to Cambodia since September 2016, and though it is quite a change from her previous life in the Belgian capital, she is eager to bring some of her previous experience in development policies to Cambodia.

“It is one of the main, if not the main, focus points of the embassy here. So it is a way of continuing working on development policies, but from a specific country perspective. That is very interesting to me,” says Sargren.

Sweden has had diplomatic relations with Cambodia since 1961, and had its first development cooperation there immediately after the Khmer Rogue fell in 1979.

Previously, Sweden only had a development cooperation office in Cambodia, but in 2010 they opened the Embassy in Phnom Penh. This means that they are no longer focusing on just development, but also things such as cultural affairs, trade promotion and investment. Sweden also remains one of the main donors to the Khmer Rouge Tribunal.

Business Sweden is present in many places in South East Asia, but not in Cambodia. The ambassador is therefore happy to see the start of a new chapter, a Nordic Chamber of Commerce which launched on 1 March 2017.

“I think we are seeing a beginning of an increasing interest in doing business, or looking at business opportunities at least, in Cambodia.”

Having the much bigger and more developed Thailand as a neighbour, Cambodia has in some ways been overlooked business wise. Cambodia is a relatively small country with a population only around 15 million, which can hardly compete with Thailand’s nearly 70 million. But with Cambodia’s rapid economic growth, Sargren believes it is definitely a country of opportunities, and people who are already doing business in Thailand or Vietnam should see Cambodia as an opportunity for growth.

“What’s interesting with Cambodia, I think, is it has an increasing middle class that is growing rather rapidly. It is a whole new young generation that is growing up and that is beginning a professional life with a whole different outlook compared to the previous generation.”

Working on bottlenecks
The Ambassador sees Cambodia as a very young country in many respects; it is a country that is still building up after the Khmer Rouge, therefore development cooperation is still a big part of Sweden’s work with Cambodia. Having such a long history of working with Cambodia in that field, Sargren wants to use that platform for a broader promotion agenda.

“For instance, education has long been one of our main priorities for the development section, which can rather easily be transformed into participation in book fairs and writers and readers festivals. We have recently had a Khmer translation of Pippi Longstocking that we have been promoting. That is a way of using development cooperation as a starting point, to also broaden to wider promotion.”

Sargren is also hoping on bringing some of Sweden’s innovations in the sustainable energy sector, such as solar cells, to Cambodia, which in the future can help bring down the high electricity costs that is everyday life in Cambodia. Since it is still a somewhat young country, it also means that there are a few bottlenecks that can create some challenges for businesses and investments. Beside the expensive electricity, corruption and skills gap are also big challenges in the country.

Sweden, as well as EuroCham and other countries present in Cambodia, are constantly working on more transparency and ways to scrutinize the money flow.

“Fighting corruption is important in any country, including in Sweden,” says Sargren.

Developing every day
From the windows at her embassy office in Phnom Penh, Maria Sargren sees the capital developing every day. The view is filled with high cranes, and more and more tall buildings and skyscrapers are rising above the city. At the same time, you will still see that many of the streets are lined with trees, creating small tree avenues.

“I find that charming. It very much gives a softer touch to the city.”

Even though Phnom Penh is very different from Brussels, Maria Sargren has experienced the transition as quite easy.

Coming with two children, a 15-year-old girl and an 8-year-old boy, Sargren was pleased to see that the capital offered good international schools, where the children could quickly adapt. On the side, they are also able to take Swedish classes to keep up with their mother tongue. The youngest one has even decided to learn speaking Khmer.

“It was his initiative. He came home one day, early during the autumn, saying, I want to learn the language that they speak here in the country, so I have signed up for Khmer lessons.”

The ambassador herself is also planning to take on the challenge of learning the difficult language.

“As usual, language is also a way into a culture, and a way into how you structure life in a sense. So it is interesting to get an insight into the culture form that point of view.”