The 2 February 2017 networking by the Thai-Swedish Chamber of Commerce (TSCC) was held at the familiar venue Huntsman’s Pub, Landmark Hotel, where the sponsor and member company in focus was Nishaville Resort & Spa – a for many Swedes in Thailand well-known resort. 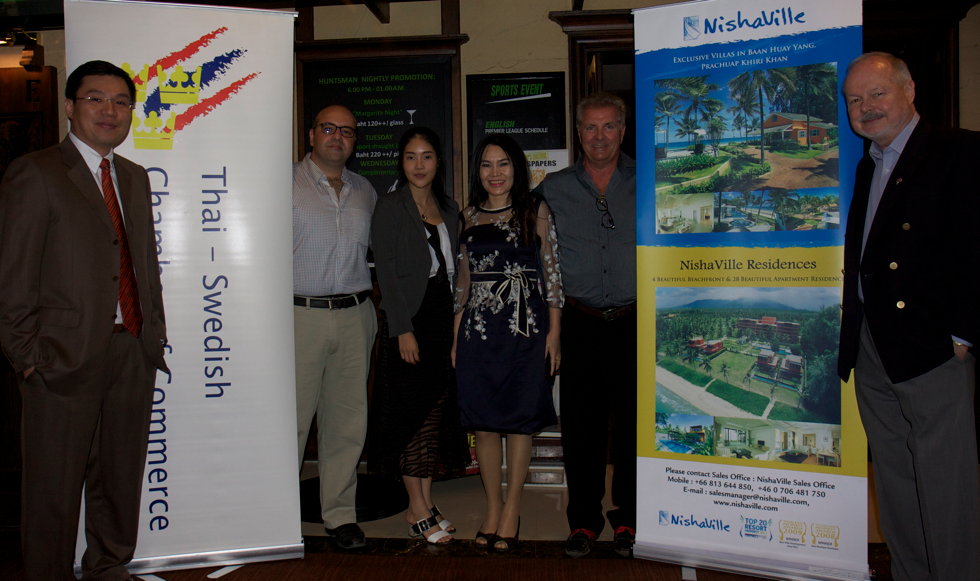 Nishaville, a Thailand Property Awards winner, is a mixed-used development that truly represents a high quality and nicely designed beachfront property with an amazing summerhouse feel to it, not to mention the pristine beach area where it is situated. The resort features expansive gardens and a perfect combination of villas and apartments, operated as a hotel business for the unit owners. Nishaville also has its own garden for growing organic vegetables and herbs.

This uniquely designed resort was developed in the period when Huay Yang (in Southern Prachuap Kirikhan) was placed on the Thailand map for foreigners by several Swedish developments, turning it into on of the most visited destinations in Thailand by long-stay Swedes.

Nishaville has been a member of TSCC ever since the development started, when Scandinavians were targeted as residential investors in Thailand.

At the networking the Nishaville team, with Managing Director Supakorn Kijkanakorn, General Manager Yannis Amarantinis and Sales Manager Lars-Åke Persson in attendance, presented the resort and its selling points.

Lars-Åke Persson told ScandAsia that currently (during high season and connecting to the winter school break in Sweden) there are around 2 000 Swedes residing in Huay Yang.

“Now is its the peak with mostly Swedish people in the village. Totally more than 800 villas and apartments were sold to foreigners here. Many who are here now are rental guests, including many families when the schools have vacation in Sweden. Around 20-30 persons live here the whole year while most owners spend 3-6 months in Huay Yang, normally during the period November to March,” said Lars-Åke.

With opportunities for Thais and Swedes in Bangkok to take splendid beachside vacations and really get away from the crowded and noisy capital, he continued presenting Nishaville’s selling points: “It’s the perfect place for those looking for a calm and quiet place, with kilometres of un-crowded beaches in a small fishing village (Huay Yang). There is high service level both in the village and at Nishaville, a resort with 24 hours reception service, transportation with golf carts, own restaurant, pool areas and other services.”

The sales manager pointed to the setting as the best thing about the resort for him: “It’s directly by the beach, with no road between the area and the sea. And directly north of Nishaville is the national park Wannakorn, and on the south side a temple. That guarantees that there will not be any other buildings on either side of the resort.” Lars-Åke has been part of the development of the foreign community Huay Yang since the very beginning, as he started working with property companies there already back in 2005.

At the networking he told the audience how privileged he felt having been able to be part of the development of residential areas in Huay Yang for so many years.

“I am only here during the winter season, mostly from October to March and for the last four years I’ve responsible for sales at Nishaville. And it’s very special to have been involved with around 100 buyers and most of them being very good friends now.”

“It started with only Swedish and some Norwegians. Today we have Germans, Russians, Chinese, Moldavian and Australian owners here. The resort now has many guests from the whole world so I believe the future buyers will be more from other nationalities than Swedes,” he believed.

Currently Nishaville has one apartment and two exclusive beachfront villas available for investors. Buyers have the option of joining the resort’s program.

“It gives a yearly income and we take care of everything.”

“The most remarkable things in Nishaville is the quality of the resort (design of the Villas, quality of construction, furniture and overall set-up) and its location. Our guests and our villa owners do have the feeling to live in a hidden place, a secret paradise and they often ask me if Huay Yang will become like Hua Hin one day!“ said the resort’s general manager, Yannis Amarantinis when asked about the resort’s unique selling points.

Yannis had just started working at Nishaville in January and has a lot to compare with when giving his assessment, having working for nearly ten years in Koh Samui, in various places on Phuket and also in Luang Prabang in Laos.

“It’s challenging these days in Thailand to find a beachfront resort without any disturbances (long tail boats, speed boats etc.). Nishaville has 300 meters of white absolutely unspoiled sandy beach, but it is not too isolated, so our guests still can go outside to local restaurants for dinner or explore the charming city of Prachuap kiri khan that is a 15-minute drive away only,” he commented.

In sponsoring the TSCC event Yannis said that their target was to just make the Swedish Expat community aware that, at 4 hours’ drive from Bangkok, they will find a beautiful resort on a pristine beach.

“And it’s very likely that the guests you will meet there talk Swedish.”

As for getting there Yannis replied: “We can come to collect the guests at the airport of Chumpon if they prefer to come by plane from Bangkok. But a very charming and unusual option is the train. Still the best would be by car, so you can drive around the area during your stay, go to waterfalls or nearby activities.”

He also recommended the resort as perfect for the long weekends and short breaks. 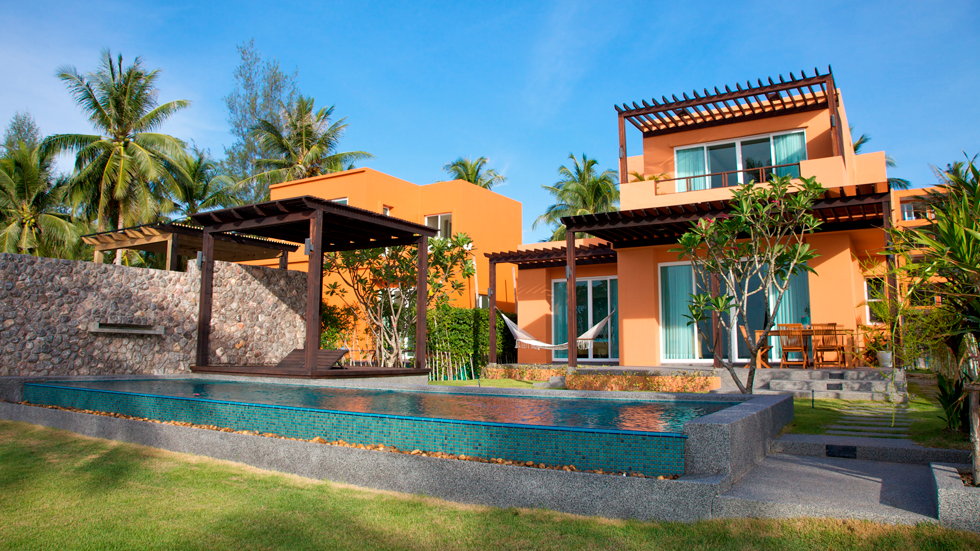 ”The weather by the sea is great all year long, and our villas are very comfy and cosy. So even if it rains a bit while you are here, you can still read a book on the terrace, listen to your favourite music or just watch the waves rolling onto the beach.”

For businesses Nishaville can also cater to meetings and events: “If we think about a classroom setup, we can easily welcome 120 people. Our property offers also a large range of options for team building events and activities in our gardens or on the beach.”

Two of the Swedes in Bangkok who won the evening’s Lucky Draw will get to try it out, along with their respective families and friends. One of them is Mr Björn Richardsson, who won a night’s stay for four people.

A slider with the ID of 23 doesn't exist.