Prime Minister Solberg is also visiting Vietnam in her capacity as co-chair of the UN Secretary General’s Millennium Development Goals (MDG) Advocacy Group. The Prime Minister will attend a high-level seminar in Hanoi on the future of the global development agenda and the lessons learned through Vietnam’s efforts on reaching the MDGs and also travel to rural areas to see these efforts. 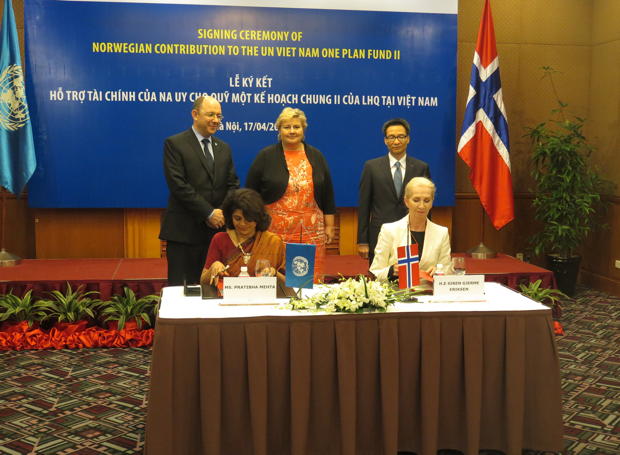 Norway and Vietnam have enjoyed strong relations throughout more than 40 years of cooperation. Since their diplomatic ties were established in November 1971, Vietnam and Norway have seen their relations actively developing across politics, economics, culture and society. Both countries share a strong interest in increased trade and investments, and work together to address global challenges such as the fight against poverty, a strong and efficient UN as well as climate change.

Recently the diplomatic encounters have been frequent: Most recently, Vietnamese Prime Minister Nguyen Tan Dung met with his Norwegian counterpart Erna Solberg on the side lines of the third Nuclear Security Summit in the Netherlands in March 2014 and the 10th Asia-Europe Meeting (ASEM) Summit in Italy seven months later. Vietnam’s Deputy Prime Minister and Foreign Minister Pham Binh Minh also met Norwegian Foreign Minister Borge Brende also had a meeting on the fringe of the same ASEM Summit.

Norway has assisted Vietnam in its reform efforts, poverty eradication work and international integration. The Scandinavian country is currently one of the largest sponsors of Vietnam in the UN Programme on Reducing Emissions from Deforestation and Forest Degradation (UN-REDD). It pledged to provide more than 30 million USD for the UN-REDD implementation in Vietnam from 2013 and 2015.