Zoom Out Zoom In Normal 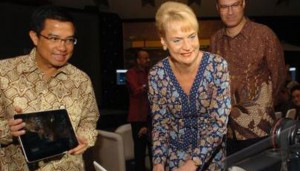 In the recent past, a number of high level visits have laid the ground for strengthening the relationship between the two countries: the visits of King Carl XVI Gustaf, Swedish Parliament Speaker Per Westerberg and Prime Minister Fredrik Reinfeldt to Jakarta and the visit of President Susilo Bambang Yudhoyono to Sweden.

The visit serves to discuss pathways for deepening the bilateral political and economic relationship and to realise the mutual ambition to increase cooperation between Indonesia and Sweden, materialized inter alia in the already signed important agreements between the two countries concerning environmental cooperation; health cooperation; science, technology and innovation; and sustainable urban development. This first visit to Jakarta by Mr Belfrage will furthermore explore avenues on deepening the cooperation between the two countries on matters of mutual interest and concern in the field of human rights as well as in regional and global affairs.

“This visit brings particular weight in the strengthening of ties between our two countries as it comes at an important time in the development of the already strong relationship between Indonesia and Sweden, following up on the recent visits by Prime Minister Fredrik Reinfeldt to Jakarta in the fall of 2012 and of President Yudhoyono to Stockholm this past spring,” Ambassador Ewa Polano said.

During his visit, Mr Belfrage will hold bilateral meetings with Foreign Affairs Minister Marty M Natalegawa, the Special Staff of the President for International Affairs and Spokesman to the President Mr Teuku Faizasyah, Senior Adviser to the Vice President of Indonesia Professor Dr Dewi Fortuna Anwar and a number of other key partners in the Indonesian-Swedish bilateral relation. The Vice Minister will furthermore meet with the the Deputy Secretary General of ASEAN for Community and Corporate Affairs Mr AKP Mochtan, the Ambassador of the European Union to Indonesia Brunei Darussalam and ASEAN Mr Olof Skoog, the Ambassador of the United States to ASEAN Mr David Carden as well as with experts in several specific fields of focus.