He was in a hurry; the too little portion of dynamite, pyroxilin-cotton gunpowder and waterproof cables had arrived only the day before and the French gunboats Comete and Inconstante could be expected by the mouth of the river anytime soon. But the 12th and 13th of July in the morning he managed to produce 16 bombs contained in old oil drums. He used a rowing boat and placed them onboard small old barges anchored with intervals across the river from Samut Chedi to Paknam. The drums were connected to four stations from where they could be detonated; he was now onboard one of them -an old lightship, placed very close to the deepest part of the river, only annoyed that the quantum of explosives in each drum was only half of the desired.

The 13th of July, 1893, late afternoon, grey weather but good visibility and no rain, the gunboats broke the barricade. Waiting for them to come as close as possible, Westenholz -cool and composed, detonated the dynamite and cotton-gunpowder in the nearest drums. They exploded very close to Inconstante, shaking the ship and causing much damage but not strong enough to prevent it from sailing slowly on. A cascade of water rose many meters up in the air, for a while covering both ships. The old Siamese warships behind the barricade were no real match for the French and the cannons of Chulachongklao fortress were not close enough. Late in the evening the gunboats anchored in front of the French Consulate on Charoen Krung Road, Bangkok, within shooting range of The Grand Palace; they were followed by the more or less maneuverable Siamese ships. The plan was that they all combined should ram Comete and Inconstante. Westenholz and his friend Captain Walter Christmas onboard the ‘Coronation’ expected that this would be their last battle and they had a long and open hearted talk. In the last minute King Chulalongkorn wisely forbad further action and send Richelieu to stop the ships. Negotiations at gun point followed and not to have his palace bombed and the country annexed the King had to pay an enormous “compensation”. The Mexican silver dollars were carried onboard by coolies, bag after bag for hours – robbery, pure and simple.

Aage Westenholz was born 1859 in a bourgeois family of merchants and landowners, furthermore his father was a former Minister of the Finances. He graduated as Civil Engineer number 409 from The Technical University (Polytechnic High School) in Copenhagen 1884. In 1893 he had already established a civilian career in Bangkok, but when the conflict with France was imminent, he, as an expert, volunteered and was enlisted, we find him in ‘the List of Foreigners in the Royal Thai Navy’ for the year 1893, 34 years old and with rank as captain.

Westenholz was also a child of the first industrial revolution, with unquestioned admiration for all technological things new, electricity, new machines, the railroads, the steamers and a little later automobiles: ‘Modernity’ named. He arrived in Bangkok the 18th December 1885, hired as managing director for a tile works. In the town where all Danes knew each other he soon got acquainted with Commodore Richelieu and people around him, H.N. Andersen especially, they were of three very different backgrounds; the son of a pastor, long dead in The West Indies, the son of a cleaning lady in Nakskov, Denmark and then the son of Danish high Society –the sparks soon flew.

From King Chulalongkorn’s own hand Richelieu the 5th of May 1887 got a concession to establish and run a tramway line in Bangkok. A limited company was established; the King bought shares and for a period of time held 50%, Richelieu and H.N. Andersen also held substantial portions of the shares. Richelieu functioned as Chairman of the Board and he appointed Westenholz as engineer and soon thereafter managing director of the line, first six, then nine, then eighteen kilometers, running along Charoen Krung Road; later one more line was built. In a very short while the tramway became a great success, very profitable and the ponies had to work hard. On Westenholz’s initiative and with his expertise the tramway was electrified in 1893, the tramcars then drove much faster and more and more accidents occurred, it added to the casualties that the Siamese believed to be a blessing if their shadows were run over by a tramcar. The company was under British jurisdiction and had, according to British practice, to pay high compensation to the victims and or their families. Then the company registration was changed to Denmark where compensation was in general lower. It became cheaper to run over the Siamese, but with so many casualties in the narrow streets the situation was untenable, and in 1895 a rift occurred among the members of the board where Westenholz wanted to drive fast for profit reasons and defied the recommendations of the board to slow down.

“According to Richelieu, Westenholz declared that it didn’t matter much if pedestrians were sometimes run over, if, by driving fast, one could save so and so many minutes of each passengers life!” (Kaarsted, Tage: 1991, p. 50, my translation). This view of course tells us about Aage Westenholz as a person, but also about that historical period. The same argument could easily be heard from his great American contemporaries, a Vanderbilt, Carnegie or Henry Ford.

After the dispute Westenholz left the tramways in 1895, but when Richelieu in 1898 obtained the concession for establishing ‘The Siam Electric (or Electricity) Company’ with a fifty years monopoly on delivering electricity to Siam, he was called back as manager, then Managing Director when Richelieu left Siam in 1902. The company was registered in Demark with Isaac Glueckstadt, Landmandsbanken, as Chairman of the Board. Westenholz was also the only Dane in Siam with the knowledge and capacity to run the fast growing business.

The tramway became a part of Siam Electric Company and in for example 1907 the trams travelled no less than 1.764.000 miles – stuffed with passengers.

From 1902 it shows that the extended circle of wealthy and influential people in and around the Westenholz family took over more and more shares and before he left Siam in 1910 a family group controlled the highly profitable company, in 1907 a profit of 1.5 million Danish Crowns was generated from the two businesses. Furthermore he founded ‘Maenam Motorboat Company’ in 1906. At that time local Siamese ferries sailed across the river from pier to pier, but it was Westenholz contribution to the infrastructure to start sailing up and down the Chaopraya, from Nonthaburi to south of Klong Toey and also along the major canals for example the Bang Kapi waterway. In 1908 the fleet consisted of 10 motor boats and 2 steam launches (barkasses), their schedules were laid in correspondence with those of the tramlines. Also this enterprise was a success and earned him goodwill. The company operated until 1940 where it came to a standstill because of the war, but nowadays speedy express passenger boats are again plowing the waters.

Finally he gave his knowledge about Siam and his technical skills to the Danish engineering companies who founded the later majestic Siam Cement Co. in 1913.

In Danish books and articles about the ‘nation building’ period in Siam and the Danish contribution, Aage Westenholz and his work is overshadowed by the more illustrious stories of the selfmade men, Admiral Andreas Richelieu and H. N. Andersen. In Thai academic writing that is not the case, here his work is much recognized; that goes for Siam Electric Company, the ever expanding tramways, Maenam Motorboat Co. Where especially Richelieu got the concessions and contributed to the founding of the projects, the Civil Engineer with his expertise, dogged and stable work ethics, through the years, had a lasting effect on the country and of that he is credited.

Aage Westenholz returned to Denmark with his wife and four children in 1910, he built the Manor House Magleaas overlooking Sjaelsoe in North Zealand for the family. He kept some of his interests in Siam for a while, but ‘Siam Electric Company’ was sold to a Belgian group in 1913. Westenholz owned plantations in Malaysia, under the company name: ‘United Plantations Ltd’ Berhad. Karen Blixens farm in Kenya was a part of United Plantations. The company, and thereby Aage Westenholz, her uncle, paid the deficits for many years, until the world crisis in the 1930s made this impossible.

Finally Westenholz financed a private defense corps in Denmark named after him, it was armed with machine guns; one corps was sent to Estonia after the Russian revolution, but that is quite another story. 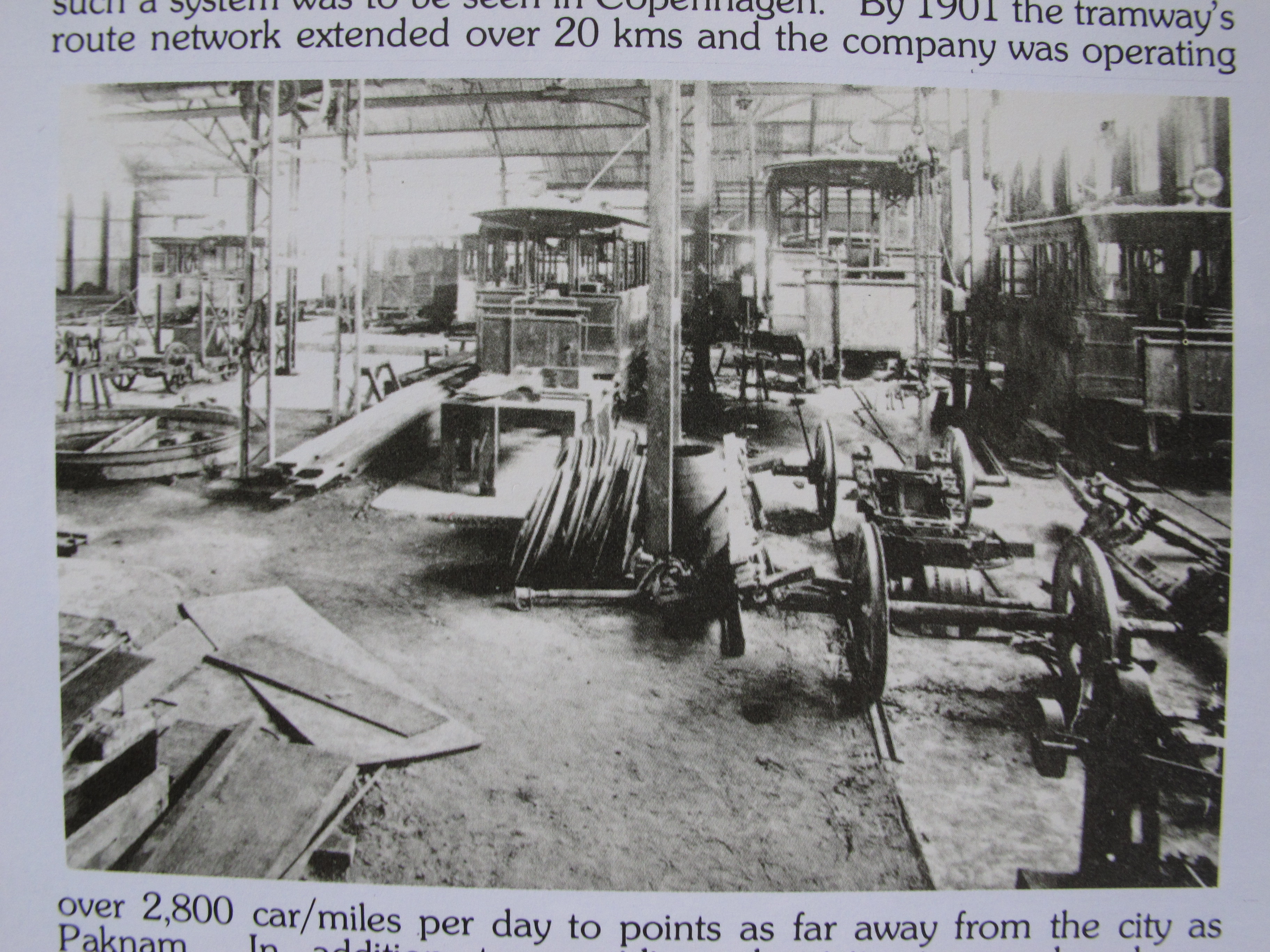