Skip to content
A slider with the ID of 11 doesn't exist.

With its brand new resurrected Victory Annexe (based on its 1930’s predecessor) the expanded legendary Eastern & Oriental Hotel, Penang (E&O Hotel) pays homage to a bygone era with stronger emphasis than ever before – precisely because of its combination of the Heritage Wing combined with this flagship addition.

Housing a total of 122 sea-view and sea facing suites (118 Studio Suites measuring 55 square metres each and four Corner Suites spanning 123 square metres each) this hotel wing, launched in 2013, has architectural elements of the original hotel combined with modern day amenities such as high-speed Wi-Fi connection.

In comparison, any communication including transporting oneself from A to B used to be at snail pace when E&O Hotel originally was established back in 1885. Hence this hotel possesses a very long history and played its significant part in introducing Asia to the first globetrotting emerging, affluent travellers back in those early days for hospitality. Thus, E&O Hotel’s significance cannot be underlined enough. 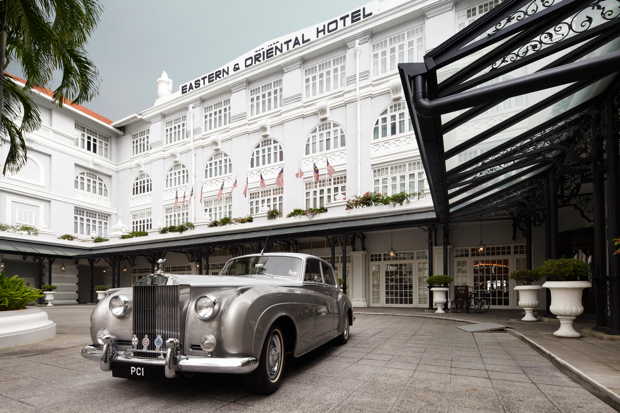 It used to be the grandest hotel in its early days, advertised in 1927 as “The Premier Hotel East of the Suez.” Its colourful history started all the way back in 1884, established by the Armenian Sarkies brothers who were also behind the legendary Raffles Hotel in Singapore to cater to the emerging, affluent travellers.

Now, timeless elegance is coupled with today’s conveniences expected by 21st century travellers; business as well as leisure clients. The Victory Annexe boasts an incredible infinite swimming pool overlooking the sea and the magnificent The Planters Lounge (serving guests breakfast, afternoon tea and evening cocktails in privacy) as well as meetings facilities; a larger ballroom and five meeting rooms – all of which are sea facing.

Design-wise the new suites hit just the right balance where colonial design combined with the recent modern innovations such as rain showers – here coming as twin showers in a bathroom with sea view that is just stunning and deserves a champagne toast!

All suites are high ceilinged and spacious, just like the Poolside Terrace outside the club lounge offers ample room for guests’ poolside lounging, with light refreshments and cocktails on offer.

The expanded E&O Hotel in the heart of the Unesco Heritage zone in George Town is a haven for heritage hotel purists and to enjoy the finer things in life and a bespoke travel / holiday adventure. E&O Hotel has stood as a testament to the grand elegance of the British colonial era since its establishment.

Its story is inextricably woven into the island’s history, having played host to many rarefied guests; some of the world’s most celebrated artists, writers and heads of state among them.

E&O Hotel is about bespoke wall panelling, chandeliers and colonial furniture and interiors all the way: saloons for the rich and famous now being shared by a wider audience of travellers seeking hotel heritage and opulent service. It is not every hotel where the check-in hosts wear smoking!

Guests are attended to by the E&O’s round-the-clock impeccable butler service and staying in suites offering the perfect invitation to step back into the refined elegance and colonial grandeur of a golden age.

E&O Hotel is renowned the world over for its old world, colonial charm and history; its distinctive classic elegance and grace of service enhanced with time. Steeped in history this heritage hotel is the embodiment of both a special time and a special place.

Revitalised, the luxurious 220 all-suite hotel stands as the grand dame of heritage hotels, brought into the new century – an era where travel keeps on being an art form that is fine-tuned further as time goes by.