Singapore Writers Festival is a unique chance to explore the literary arts of the Nordic region, including Denmark. Meet Christian Jungersen, international bestselling author from Denmark, during the festival as he participates in two different events:
“Nordic Lights: An Introduction to Nordic Literature” on 9 November and “Nordic Noir” on 10 November both at the National Museum of Singapore. Panellists: Roy Jacobsen, Christian Jungersen, Sjón, Aase Berg
Beyond murder and crime, Nordic literature boasts many wonderful works of fiction and poetry with profound insights about the human condition. Also discover how the icy Nordic landscape figures in their writing. 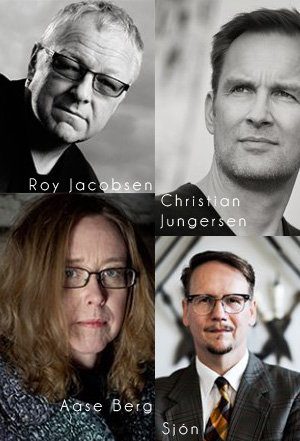 Roy Jacobsen
One of Norway’s most influential contemporary writers, Roy Jacobsen has 11 novels, four collections of short stories, a biography and a children’s book to his name. After his sensational 1982 debut with short-story collection, Fangeliv [Prison Life], he has developed in his works a special interest in the underlying psychological interplay in human relationships. His 1991 breakthrough novel Seierherrene [The Conquerors] won him wide readership and excellent reviews, while Vidunderbarn [Child Wonder] was widely translated and admired. He was shortlisted for the International IMPAC Dublin Literary Award in 2009 for Hoggerne [The Burnt-out Town of Miracles].

Christian Jungersen
Christian Jungersen is an international bestselling author. His latest novel, You Disappear, is a thrilling story of a family where the husband suffers from a brain tumour that gradually changes his personality through the book. Beyond being a suspenseful family drama, the book brings the latest breakthroughs in brain science into the world of literature. Currently being translated into 10 languages, the book will be published in English in January 2014.

Sjón
Born in Reykjavík, Sjón is the author of the novels, The Blue Fox, which was awarded the Nordic Council’s Literature Prize; From the Mouth of the Whale, which was shortlisted for the Independent Foreign Fiction Prize and the International IMPAC Dublin Literary Award; and The Whispering Muse, among other works. His novels have been translated into 25 languages. He is also a poet and playwright. As a lyricist, he has written songs for Björk and was nominated for an Oscar for the lyrics he co-wrote (with Lars von Trier) for the song, ‘I’ve Seen It All’, from the film, ‘Dancer in the Dark’.

Aase Berg
Aase Berg is a poet and literary critic, living in an old farmhouse in the north of Sweden. She has published six collections of poetry in Sweden, including Remainland (2005) and With Deer (2009). Her poems have been translated into English and published in the US. The collections are gothic and hallucinatory, and the topics vary from pregnancy and motherhood to observations on nature, animals and society.

Visit Singapore Writers Festival, on this link, to learn more about the other programs presented by The Arts House, the festival’s key program partner.

One Comment on “Meet nordic writers to Singapore Writers Festival”