One of Nokia’s Chinese partners has leaked the price and specs of Lumia 1520, the first phablet that would be unveiled tomorrow at the Nokia world event in Abu Dhabi, Inferse.com reported.

When there are a few hours to Nokia world event tomorrow in Abu Dhabi, Tmall store, a Chinese local retailer accidentally unveiled the price and tech specs of the Nokia Lumia 1520 code-named “Bandit”, one of the next top range products of the Finnish Company.

The leak — coming from China — confirms the Nokia Lumia 1520 will be equipped with a 6-inch 1080p display, a quad-core Qualcomm Snapdragon 800 SoC and a 20-megapixel PureView camera. Aside, the retail price will be 4999 Yuan, or about $819 at current exchange rates.

In addition to current leaked info, the previous speculations also indicate the arrival of an over-sized Lumia smartphone with a Full HD (1080p) display, 2 GB of RAM, 32/64 GB of storage options, a 3,400 mAh battery and NFC connectivity. 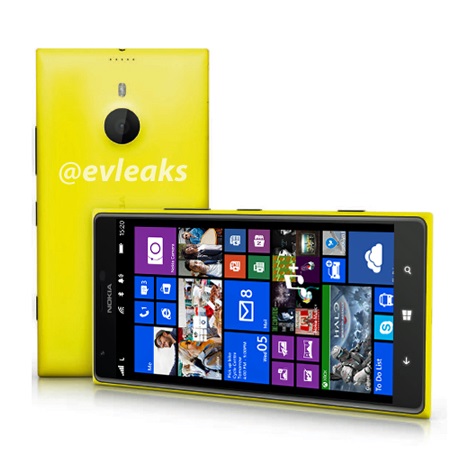 Moreover, the device is likely to support wireless charging as already seen in other high-end Lumia smartphone. Lumia 1520 will also inherit colors from its family and come in three different colors, namely black, white and yellow.

Software wise, the Lumia 1520 will be shipped with the latest bittersweet shimmer firmware based on Windows Phone 8 Update 3 aka GDR3, which will be rolled out to other Lumia smartphones by the end of the year.

Well! The stage is set in Abu Dhabi, and we’ll reportedly witness Nokia Lumia 1520 arrival tomorrow. Besides, it’s also being said that Nokia would also present as many as six devices including the most-rumored Lumia 2520 tablet based on Windows RT 8.1. On the same day, Apple is also gearing up for its annual autumn event in San Francisco, where the Cupertino is expected to announce the new iPads, MacBook Pro, Mac Pro and OS X Mavericks to the general public.