In 2001 The Danish Cyclists’ Federation launched the campaign ”Bike to School” (BTS). BTS is a recurring cycle campaign for school children of all ages. It’s purpose is to get more children to cycle to and from school – and cycle more in general. 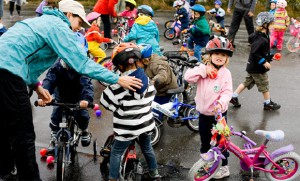 This year 127.000 kids from around 1.000 schools are participating in the campaign during the first two weeks of September. During the the campaign, the class gathers points by cycling as many days as possible. After the campaign, lots are drawn for funny and cool bikeprizes.

This year the Danish schools are facing a new reform with a number of new requirements. One of these requirements are 45 minuttes of physical activity. And the campaign is actually tailored to meet this demand: