Carsten Dencker Nielsen, Honorary Consul for Thailand in Denmark, EAC Managing Director and Honorary Chairman for Asia House passed away on 25 February 2019. The funeral will take place on 8 March 2019 in Hornbaek Church at 13.00.

Under the headline “The Flagship Captain of the EAC’s has disembarked”, two of Carsten Dencker Nielsen’s many close friends, Erik Boegh Christenen and Martin Jes Iversen has written the following obituary: 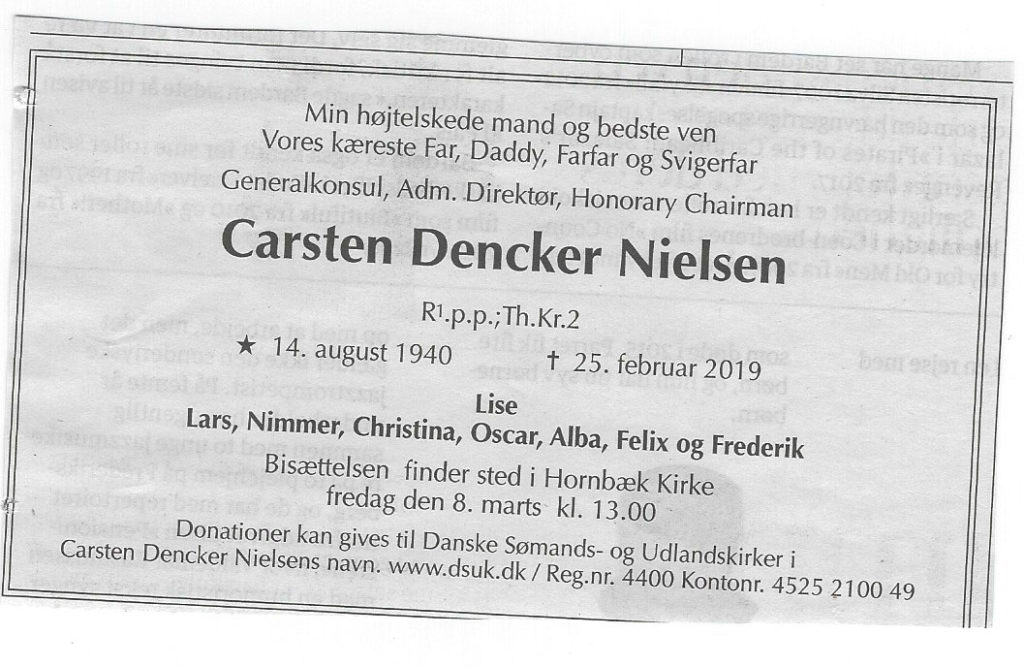 “It is with great sadness that we learn that former EAC Director Carsten Dencker Nielsen has passed away after a brief illness, 78 years old. Carsten Dencker Nielsen lived an adventurous life with postings in Mombasa, Lagos, Jakarta, Tokyo and Bangkok before he eventually ended his career as Managing Director – the top post – of the company he spent over 50 years working for, the East Asiatic Company.

After finishing his lower secondary education at Vestre Borgerdyd School in Copenhagen, Carsten was employed as apprentice in EAC in 1957 at only 16 years of age. He was then posted for 8 years in East Africa and Nigeria. In Mombasa, Carsten met the love of his life, Lise, who would become his wife and partner in life. Lise was a child of the EAC herself, being the daughter of Branch Director Knudsen. She was born in Singapore and grew up in Australia and Africa. Lise and Carsten created together the framework of a rich life both socially and culturally at their postings in Lagos, Jakarta, Tokyo and Bangkok, as well as finally in their apartment on Strandboulevarden in Copenhagen and the summerhouse in Hornbaek. Their many friends were of a variety of nationalities. They maintained traditional values and were as hosts always open, inclusive and easy going. They had two children, Lars and Nina, both of whom have followed in the footsteps of their father, building distinguished international business careers of their own.

At the age of only 33, Carsten became Head of Country for EAC in Japan and as of 1978 he promoted to lead the activities of the Company on Thailand and IndoChina. After 24 years of postings abroad, he returned to the Head Quarters in Copenhagen. After five years as Head of Division he took in 1992 over the post of Presiding Managing Director of EAC as the Company had run into economic trouble. Carsten was charged with working out the plan for restructuring the activities of the Company, which was consequently carried out successfully. In 2005, when the Board and the leading shareholders agreed to wind down and close the EAC, the Company’s market value stood at 11 billion Danish kroner. The following payment to the shareholders of over 8 billion Danish kroner is the largest dividend ever paid out in the history of the Stock Exchange of Copenhagen. The vision at the founding of the East Asiatic Company by the end of the 19th century was to improve the mercantile position and reputation of Denmark in the World. That vision was realised and Carsten devoted his whole working life to achieve this successfully.

After the dissolution of the EAC, Carsten focused his working efforts on developing Asia House, where he was Chairman of the Board, as well as the EAC Foundation, where he was Vice Chairman of the Board. The purpose of these activities are to participate in maintaining and strengthening and developing the relations between Denmark and the countries in Asia, as well as manage and preserve the historical legacy of the EAC.

Apart from his work as Consul General for Thailand in Denmark, President of the Danish-Africa Society and Honorary Chairman of Asia House, Carsten was also active in Rotary both in Denmark and internationally. Throughout his life he was also active in sports, an interest which he maintained until the end.

Carsten will be remembered for having built an international business career that in Danish terms is entirely unique. But first and foremost we are many who will remember Carsten for his personal qualities.

He was loyal towards the EAC and he was loyal towards his friends. Expressions like “a people’s man” was one that Carsten used about persons that he admired. The interesting thing is, that exactly this expression is so fitting about Carsten himself. A true gentleman, Carsten would instantly gain sympathy from all people that he encountered, high and low. His quick remarks and ready laugh was always combined with distinctive attitude to the subject at hand. Carsten had formed an opinion about everything. From Brexit over the future of Africa to yesterdays results in the Champion League. He mastered to perfection how to appear at the Royal Danish Court as well as how to deal with the top echelons of international diplomacy, while at the same time never forgetting his childhood roots at Store Moellevej on Amagerbro in Copenhagen. Until the end he followed closely the changing results of the local football club Fremad Amager and when he was Director of the big Head Quarters of the EAC in Bangkok he even arranged for a copy of the local paper Amager Posten to be delivered with the SAS plane every week, so he could follow what went on in his old child hood neighbourhood. Carsten was the Branch Director dressed correctly in the prescribed short sleeved, white EAC shirt who would receive guests from back home with a big smile standing in front of the white, historical head quarter on the banks of the Chao Phraya river in Bangkok. Always ready to do business. With Amager Bladet under his arm.

As a person, Carsten Dencker Nielsen was an icon, “larger than life” who left his marks on everything he touched. He had a curious mind and a great appetite for life. Not easy to get around. A man deeply rooted in his family life. We are many who have been inspired by Carsten and because of that will always remember him. Our warm thought in this hour goes to Lise, Lars and Nina and their families. On behalf of hundred of EAC Colleagues and innumerable friends we extend our condolences. We will always honour his memory.”

Read also the interview with Carsten Dencker Nielsen published in ScandAsia in May 2013: https://issuu.com/scandasia/docs/scandasia_thailand_may_2013/s/75258 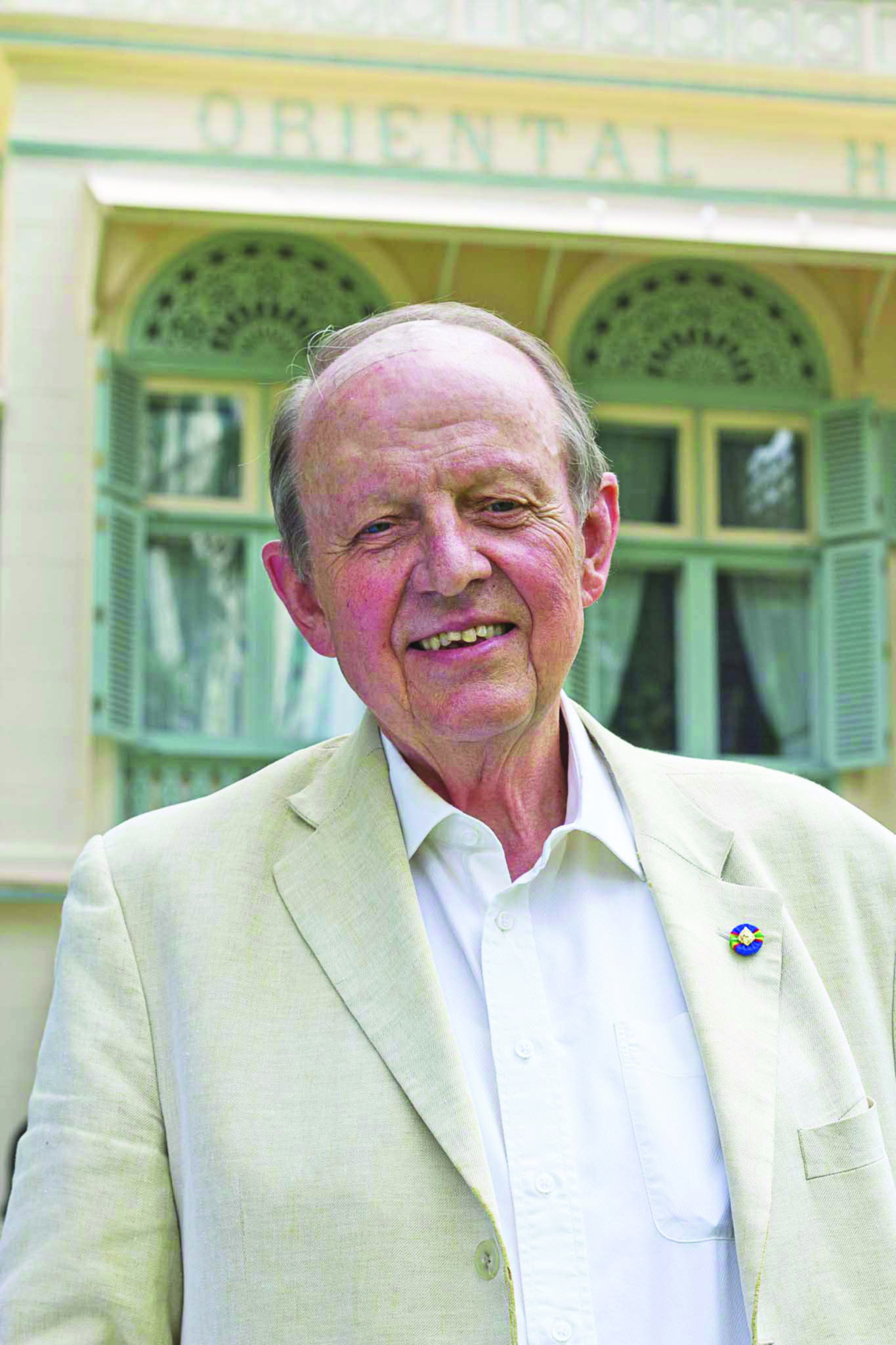 Asia House: A gateway from Denmark to Asia