The award Business Person of the Year 2015 were handed to George Kahwati, ECCO Business Management in Shanghai, for his persistent efforts for proactively branding ECCO as a Danish brand in China. Through the last 10 years George Kahwati has been the key responsible person for transforming ECCO’s presence in China from a simple distributor agreement, to having its own setup with close to 1000 shops in 230 cities around China. With his help, China has become the biggest market for ECCO worldwide.

In 2012 George and his team were awarded the Diploma of the Danish Export Association and His Royal Highness Prince Henrik’s Medal of honor in recognition of outstanding services to trade relations between Denmark and China.

Furthermore, George is a recipient of the Shanghai City Magnolia Silver Award for outstanding contribution to Shanghai’s Social and Economic Development.

The winner of the award Entrepreneur of the Year 2015 was given to Nikolaj Schnoor from LINDBERG Asia. Through the last 12 years, Nikolaj as the Director of Asian Operations, has grown LINDBERG from next to no market presence in China, to a leading high end eye-ware brand in the region.

A key part of Nikolaj’s success has been a high staff retention with several staff members having stayed onboard for more than 10 years. Today the company employs over 40 people in China and is still growing.

LINDBERG has supported the Danish Community in China by participating in many events and has through its products conveyed the spirit of Danish design. It is in recognition of the strong drive and entrepreneurial spirit and desire to promote Danish design and culture that Nikolaj won the prize Danish Entrepreneur of the Year 2015.

This year, the Election Committee decided to present a 3rd award, the Lifetime Achievement Award to Carsten Boyer Thøgersen for recognition of his 40 years of working for Denmark in China. Carsten Thøgersen is Director of Copenhagen Business Confucius Institute. He has been working with Chinese affairs with Ministry of Foreign Affairs of Denmark, European Commission, private enterprises and educational institutions, including 20 years in China, holding positions as Consul General in Shanghai and Guangzhou. Moreover, he is author of 8 books on China and Denmark. Danish actor, comedian and TV host Amin Jensen was master of the ceremony and offered the record number audience musical entertainment between the different award ceremonies. The official part of the evening ended with a surprise: a mini live concert with the Danish a cappella group Basix.

“It was a really great celebration of the achievements of some outstanding individuals and a fabulous party. It was wonderful to meet with many old friends again who have been in this corner of the world for a long time and also to meet the more recent additions to the Danish community in Shanghai.,” says Jens Eskelund, Senior Director at Maersk in China.

The guests had a ball to the very end. According to Una and Kjeld Stærk from Danfoss in China, Danish Chamber of Commerce in China deserved an award too for a wonderful gala. 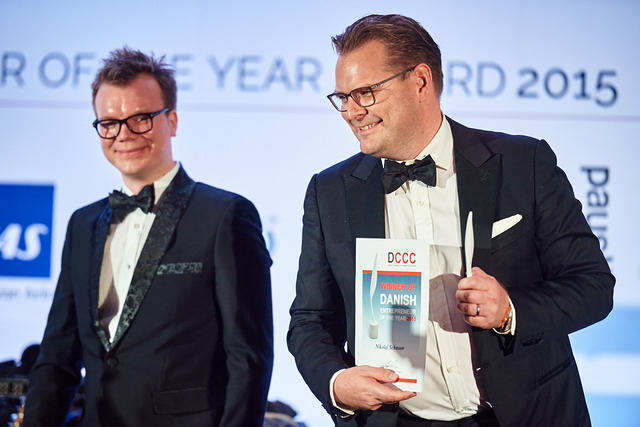 “DCCC can be proud of standing behind such an eventful evening, with a perfect mixture of awards, networking and entertainment, bringing the Danish business society in Shanghai closer together. Deep respect for the accomplishment of the Danish business people, who DCCC has nominated for the award, and who have been able to create a successful business on Chinese conditions,” say Una and Kjeld Stærk.