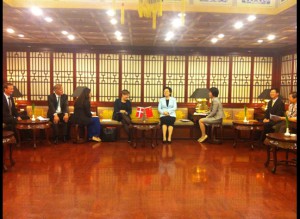 The Minister for Health in Denmark, Astrid Krag visited Beijing in the end of August.

The aim with the visit, which was the Minister’s first time in China, was to share experiences and further enhance the bilateral cooperation between China and Denmark in the field of health, the Embassy said on its Facebook-page.

Together with the Danish Ambassador in China, Friis Arne Petersen the minister met with the Chinese Minister for Health and Family Planning Commission, Ms. Li Bin, and the Minister of China Food and Drug Administration, Mr. Zhang Yong. During the visit Astrid Krag had a good talk with her Chinese colleagues on healthcare issues where the two countries are facing many similar challenges.

The Minister also visited PekingUnionMedicalCollegeHospital where she had the chance to see how the hospital system in China is operated. She was presented to the strategies developed to counter the health challenges, which China will face in the near future as a result of an aging population. China looks to Denmark on aging matters as Denmark has years of experience on dealing with a large elderly population.

“The ambitions set by Chinese hospitals are ambitions which the Danish medical companies have already helped us reach. There is no need for China to go through the same trial and error as we did,” Astrid Krag said.

“As we share many of the same challenges there is a good breeding ground for further collaboration on healthcare matters between our two countries,” she added.

Read more about the visit at the Embassy of Denmark in China’s Facebook-page, here.