A Phuket-based Danish photographer is offering a B100,000 reward for the return of his missing laptop and external hard drive containing more than 200,000 photos, reported the Phuket News. 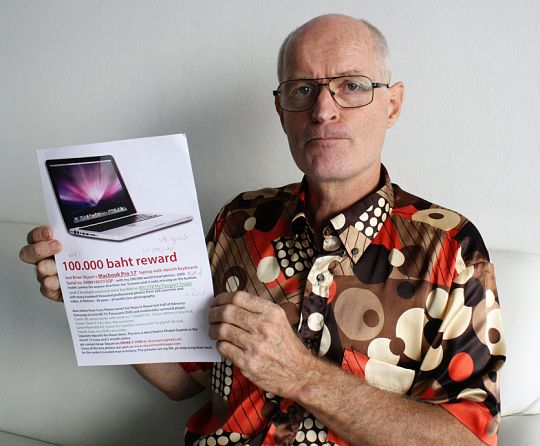 Brian Skyum, who is also the Managing Director of Coco Palace resort in Rawai, believes the items were stolen by a former staff member and their associates.

He returned from the Philippines in early March to discover the laptop and external hard drive, along with a Canon camera, two lens, a flash, another pocket camera, a tripod and a camcorder missing from his room at the resort.

CCTV cameras were in the room, but they did not work because as were not properly installed.

Mr Skyum, originally from Denmark but resident in Phuket for 13 years, has been a photographer since he was 20 years old and is hoping to recover the two most important items – the laptop and hard drive.

“They are everything to me. It is 36 years of work. I have it backed up in Denmark, but only about two thirds of it. But all that backup is raw data without any Photoshop editing.”

He estimates there are around 200,000 photos on the laptop alone, with about 2 terabytes worth of photos on the hard drive. The laptop has a distinctive Danish keyboard, which Mr Skyum says is rare, and is missing three rubber “feet” and three screws on its base.

“If I get the laptop back it’s B50,000, if I get the hard drive back, it’s B50,000. There are additional rewards for the other items, or for information leading to their recovery. No questions asked, I don’t care – I just want my stuff back.”

The photos on the missing items are from 170 countries he has travelled to over more than three decades, including Papua New Guinea, Nepal, Namibia, Mali and Mongolia.

He has already spoken with Chalong Police, who told him there was nothing they could do until the person Mr Skyum suspects committed the crime comes to the police station to be questioned.

The details of the missing items are as follows: