With a distinct focus on science and research in the pursuit for ergonomic perfection and physical wellbeing, Ergoworks and the Danish company Steppie launched the Steppie Balancing Board this Thursday, on the 10th of December, in Singapore. The Steppie Board is designed to activate your body in an otherwise static working environment, limiting the likelihood of suffering harmful back injuries. Ambassador of Denmark to Singapore, Mrs Berit Basse held the opening speech in which she stated that Steppie is a good example of how Danish design and thinking come together.

For most of human history we were hunters and gatherers and often walked or ran 6 to 12 miles per day. In the late 18th century the industrial revolution began and machines replaced many manual tasks, which reduced the amount of physical activity in our daily lives. Even more recently computers became more common in work environments, and it is now estimated that half of all jobs in western society are computer-based.

“Many of us experience a very sedentary lifestyle. It starts already in the morning sitting at the breakfast table. Then we sit while we commute to work. Then we sit in our offices and maybe even when we come home at the dining table and later with our tablets or watching the television,” she said.

Sitting six or more hours a day makes you up to 40% more likely to die within 15 years than someone who only sits 3 hours or less. The average person is sedentary for 9,5 hours a day. Many office workers sit as much as 15 hours per day. The Ambassador of Denmark also explained how the human body wasn’t built to endure the lack of activity and that it results in lifestyle diseases like obesity, diabetes and high blood pressure, and that doctors recommendations of doing at least half an hour of exercise a day is not enough to equalise negative effects of a sedentary lifestyle.

“What really pushes the boundaries for retrieving a truly healthy life is when clever design goes hand in hand with a consensus consumer culture. And the two things tend to enforce each other in a constant development of viable alternatives, that drive a healthy discourse forward,” Mrs Berit Basse said.

She further gave insight into several surveys showing that Denmark is not only the happiest nation in the world, but also a country in which healthy living and high living standards are among the top priorities. Recent research has also shown that a healthy living is seen as a cornerstone of a modern society and the Ambassador told of how the idea of a healthy lifestyle is becoming a trend that for individuals revives from riding the bike or walking rather than driving, but also that  this can be seen at companies in the form of a healthy working environment.

“Countless studies have shown that a good working environment is beneficial for the company in the long haul, as this impacts productivity and work-related injuries positively. One of the most commonly recognised working norms is the use of a height-adjustable table. For the last ten to fifteen years, this has been everyday life for around ninety-five percent of Danish employees,” the Ambassador said but also highlighted the problem with standing for a longer period of time, as you become tired more quickly than when you walk, for example.

“This is where Steppie comes in to place as the missing link,” she concluded. The sitting disease or, more accurately, metabolic syndrome, is a condition where the Lipoprotein Lipase enzymes in the blood vessels essentially go to sleep after 60 – 90 minutes of inactivity. Already as soon as you sit down the enzymes drop 90%, the electrical activity in your legs shuts off and your calorie burning drops to 1 per minute. Sitting tenses the hamstrings and causes a flattening of the normal curve in the lower back and this distortion of the spine increases the internal strain of the back. These are among the many reasons why a lot of offices now have adjustable desks for their employees. One of the companies who is trying to fix these problems is the Danish company Duba-B8, who just celebrated their 100-year anniversary, and recently opened a new showroom in the Central Business District in Singapore.

Also speaking at the Steppie event were Peter Michelsen, Key Account Manager at Duba-B8, and Martin Li, Sales and Business Development Manager for Duba-B8 in Singapore.

“Because we have been developing ergonomic furniture from the beginning we feel that we are the pioneer when it comes to office solutions,” Peter Michelsen said.

In 2011 Duba-B8 established a sales office and showroom in Singapore with the purpose of servicing their Nordic cust­omers’ business units in Asia and Australia. The Danish company is best known for its height-adjustable office tables with table tops made from FSC certified bamboo and desks that are highly flexible and meets the needs of the user. 80 per cent of the furniture manufactured by the company can be customised. One of its features is a patented ‘click’ system underneath the table that makes for easy assembly. The system also makes it possible to replace the table tops easily, where necessary or desired, without having to change the entire table. But Duba-B8 is not only about the tables.

“We do 360 degrees work solutions. When our clients come in with an empty work space, we can supply everything from the carpet to the acoustics,” Peter Michelsen further explained.

After a brief introduction to the company, Peter Michelsen also highlighted the need for ergonomics and showed a video in which it was stated that the average person spends 80 per cent of their awoken hours sitting and that standing for just fifteen minutes each hour will increase the energy, boost the metabolism and burn an extra 60 calories per hour.

“We have this program, that you can build into your laptop, that will tell you when to sit and when to stand, and then you can reconfigure it so you burn 250 extra calories a day. When it comes to standing and sitting it’s all about finding the right balance,” said Martin Li, who joined Duba-B8 eight months ago. 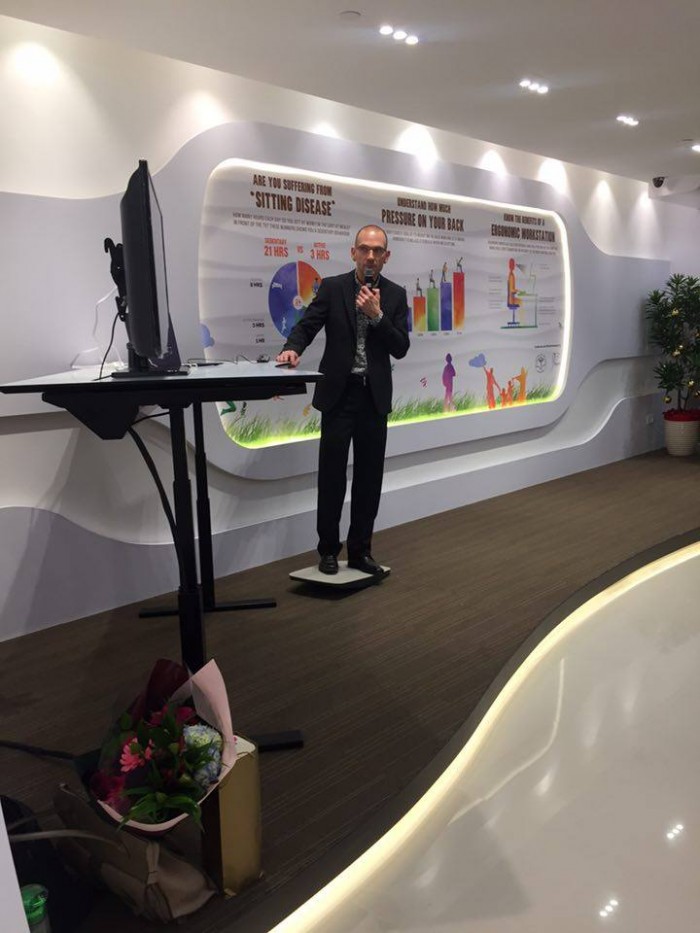 They event’s final speaker was Henrik Andersen, the CEO of Steppie, who explained that the idea for Steppie originated from acupuncturist, reflexologist and physiological masseur Gitte Toft, who through her work discovered that most people barely needed to move in the course of their working day. From her experience working with MBT shoes, which has the purpose of enhancing balance, and a special office chair, she brought the balance principle to the standing work situation.

“She knew that in the gyms you often have a balance board with a ball underneath where you train your ankles and knees. So she formed the idea of taming this board in a way so that everyone can stand for a longer period of time,” Henrik Andersen explained.

The company then started in the second half of 2013, had the prototype made in November the same year and the production of Steppie started four months later. The product first launched in Scandinavia followed by Germany and in the second half of 2014 it was launched in Australia bringing the total to seventeen countries. The launching in Singapore is the first step of the company’s Asian launch as Henrik Andersen traveled to Korea the next day.

“From getting the idea and until we had the first product, it took less than a year,” the CEO stated. 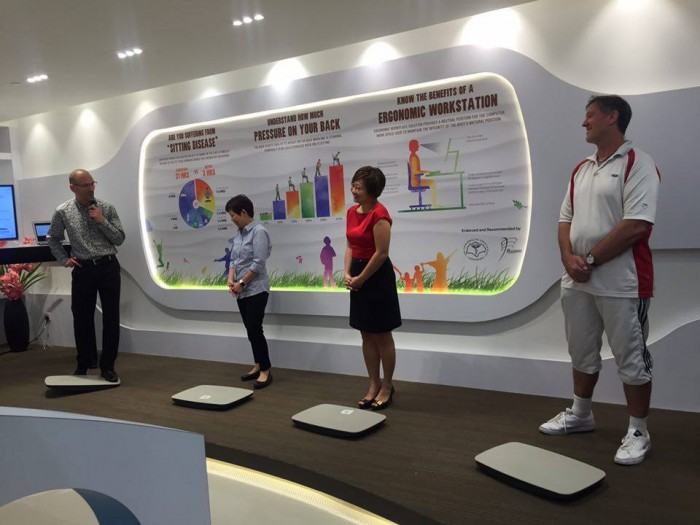