Around November each year, a Danish veterinarian Geneviève Jorgensen and her assistant travel to Thailand to lend their local colleagues a helping hand in the desperate campaign to put the number of stray dogs under control. Bangkok alone is home to more than 100,000 stray dogs.

“Can we postpone the appointment to another day? We are so busy, the dogs just keep coming. I am in the middle of an operation right now,” said Michael Martinussen on the phone.

We met a couple of days, or about 40 speyed dogs later, at the hotel where Vet Geneviève Jorgensen and her assistant Michael stayed in Bangkok. They travelled all the way to Thailand to help local vets sterilising mainly female street dogs. Their free service is financed by donations collected at Geneviève Jorgensen’s pet shop in Copenhagen. 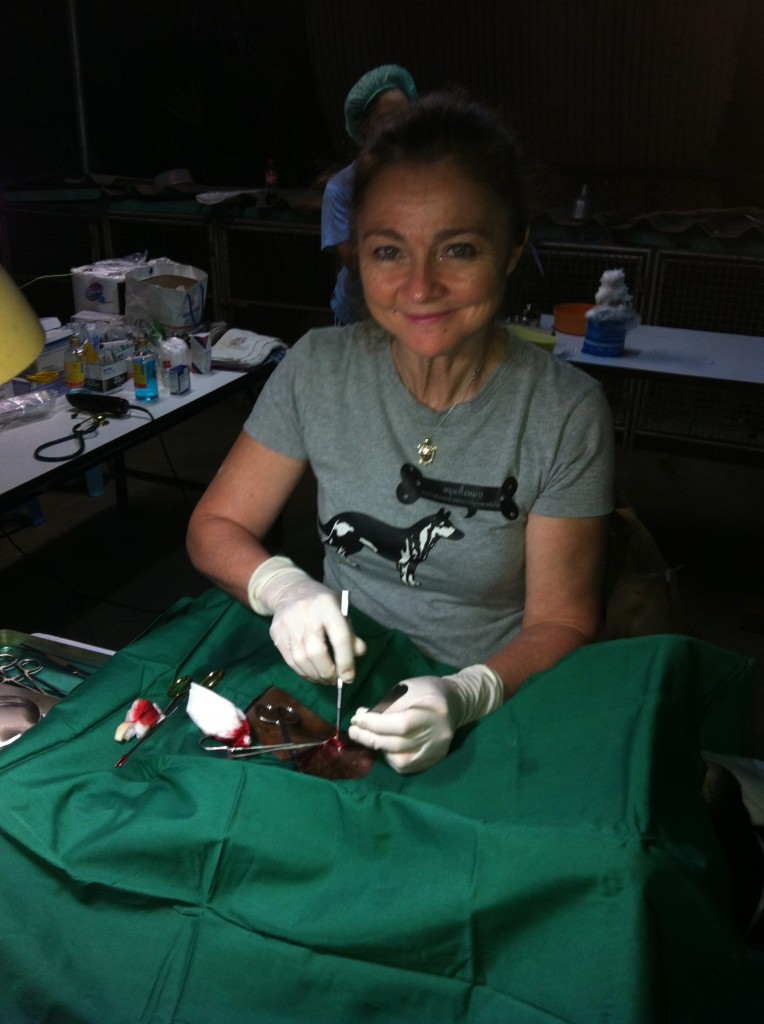 A privilege
“It is a nice way to use your privilege as a vet. The need for sterilisation of strays is huge. Wherever we set up a makeshift surgery, the dogs just keep coming in an endless stream. One more, yet another one, and then also the last,” said Geneviève Jorgensen, who appeared exhausted after a long day at the makeshift operating table, where they do the minor surgeries.

They swooped in town for just one week, but they could easily work full-time with the number of free-ranging dogs on the streets. The number of stray dogs in Bangkok alone is estimated at over 100,000. All over Thailand, the number is put between 200,000 and 300,000, depending on which organization you speak to.

A female stray dog can have two litters of 6-8 puppies per year.

“No wonder they’ve got so many strays,” said Michael Martinussen, the vet assistant, who travelled to Thailand with Geneviéve Jorgensen for the third time.

Can’t just destroy
Since she founded “Save The Street Dog” in 2007, Geneviéve Jorgensen has been to Thailand once every year. The two-person team can sterilize up to 20 female dogs a day during their week-long stay. Over the past six years, Geneviéve has operated on more than 600 street dogs.
“They live a miserable life in the streets with plenty of diseases, and it is really exhausting for a female dog to get pregnant every time she is in heat,” said the vet, who graduated from the Royal Veterinary and Agricultural University of Denmark.

They are often asked why they even bother to operate on the dogs when they could simply introduce culling.

“One thing is that if we kill some of the dogs, the rest will get stronger. That is simple survival of the fittest,” said Michael Martinussen.

To which Geneviéve added: “With that said, it is not an option to kill them when we are in Thailand, because of the Thai people’s Buddhist approach to life. We have to accept and deal with that when we are here.”

She said it could be tough sometimes.

“We see dogs with diseases in our makeshift clinic we would never ever see in Denmark. When that happens we just try our best to help the dog, cross our fingers and pray for it,” she added.

Can see the change
The actual surgery is only a small part of the whole process, which starts when the dogs are caught in the streets. A team of Thai helpers hit the dogs with anaesthetic darts to immobilise them before they are transported in cages to the clinic. Here they will get vitamins, antibiotics and another anesthesia, before they get shaved and go under Geneviéve’s scalper.

Aside from preventing the dogs from reproducing, the minor surgery actually helps improve the dogs’ quality of life. After sterilization they simply start to feel better in general, they explained.

“Last year was our second time in Hua Hin, and for me it was clear to see, that there were fewer dogs in poor health than the year before, when almost all of them were thin and starving after having litters of puppies,” Michael Martinussen explained and remembered that some of them even greeted them with wagging tails.
“Such experience makes it all worthwhile. It was so obvious, what the treatment had done to the dogs,” he added. The sterilization of stray dogs is a relatively costly campaign in Thailand, and Geneviéve and Michael pay for and bring along all the instruments and medicines that they need. The money comes from sponsorships and from the collections at the clinic in Copenhagen.
“After six years the companies which support us are starting to realize that we are serious about this. They see that we continue year after year, and it makes them want to continue to support. Besides we have a group of nice customers who often chip in to support us,” said Geneviéve Jorgensen.

Expats living in Thailand are encouraged to provide financial support to the campaign.
“The best thing you can do is to get street dogs sterilized. It is way too expensive for most Thai people to pay, but for many foreigners it is not. So just go out there, find a dog and bring it to the veterinarian. It helps!” said Michael Martinussen.

More photos in the gallery below.