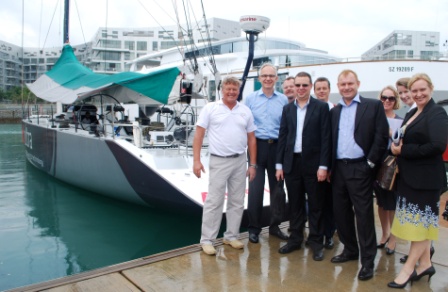 An Extraordinary General Meeting was held on December 13th 2012 at the Marina at Keppel Bay to address issues of immediate importance with the Finnish Business Council in Singapore’s (FBC) constitution and to elect committee members to replace those who have relocated or otherwise needed to step down from their duties.

The name “FBC Committee” itself was changed to “FBC Board” to better reflect the type of work accomplished by the group. Also, now one Individual Member can be elected as a member of the Board, and Board members (if elected to do so) can hold their office for 5 consecutive years in row instead of three. Also, Corporate memberships were divided into Category A for companies with more than 5 employees in Singapore (fee SGD 700 per membership term) and Category B for companies with less than 5 employees in Singapore (fee SGD 350 per term). Individual members was decided to be kept unchanged (fee SGD 350 per term).

Mr. Arttu Salmenhaara from Kone Pte Ltd. was elected as a new Deputy Chairman to replace Mr. Mikko Lehtonen from Nordea who has repatriated to Finland. Seppo Leskinen from Karelia Asia Pacific Pte Ltd. was elected to replace Ms. Nathalie Ahlström from Amcor Singapore Pte Ltd who decided to step down due to work commitments. Mr. Jari Talvinen was re-elected to continue as a Board member, now representing Paradise Investment & Consulting Pte Ltd. instead of Aalto EE.

After the EGM and a following lunch, well-known competitive sailor and Captain Ludde Ingvall gave an inspiring presentation called “Teamwork in a Competitive Environment”, in which he looked into how effective teams are created, what the benefits of teamwork are, and how teamwork is conducted in high pressure environments. After the presentation, FBC members visited Ludde’s AUDI Ultra boat moored in the marina.