Lumpini police saved the life of a 38-year-old Finnish man, who attempted to jump off of Honey Hotel on Soi Sukhumvit 19 in Wattana district on Monday September 2. 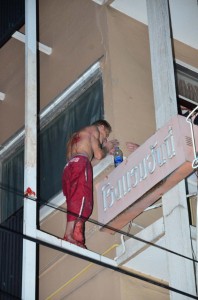 The man, later identified as Nika Antero Jokinen, was standing alone and shirtless on the hotel’s balcony on the third floor when the cops arrived. Jokinen reportedly looked fatigue and was bleeding from his back and feet.

Police and a friend of Jokinen’s managed to calm him down in one hour before sending him to a hospital for physical treatment.

According to authorities, Jokinen has stayed at the hotel since Aug. 20 and recently broke up with a Thai woman, a situation that led to Jokinen’s suicide attempt. Police will inform the Finnish embassy about the incident, the Dailynews reported.