On 30 July 2015 the Embassy of Sweden in Jakarta hosted a pre-departure gathering with new students going to Sweden, Alumni Swedia and PPI Swedia. Alumni and students of Swedish universities were invited to an evening of meeting old and new friends at Istituto Italiano di Cultura Jakarta.

With generous support from the Swedish Institute, this annual gathering of alumni, current and new students of Swedish universities provides an opportunity for learning about, exchanging, and reminiscing experiences studying (and living) in Sweden. 30 July also happened to be the International Day of Friendship this year. Chargée d’affaires a.i. Lina Eidmark gave a presentation on how to feel at home in Sweden, such as enjoying life without “macet” (traffic jam) and spending lots of time in nature. Learning to call everyone without titles (except for the royal family) was mentioned. Professors can be addressed only by their first names.

A number of funny but useful tips were given, such as the favourite topic to talk about (the weather!), the Fika tradition and cinnamon buns, the punctuality spirit, the love for the environment, etc.

The evening went on with presentations from the chairmen of Indonesian alumni network “Alumni Swedia” Erlangga Arfan and student association “PPI Swedia” Benni Yusriza, followed by a mini quiz for new students and group discussions over dinner. The discussions covered anything from academic to daily life, for example: where to get bargain books, used bicycles, halal food, etc. Alumni and students were divided into four main groups: Gothenburg, Lund and Malmö, Uppsala, and Stockholm, with those who reside in smaller cities sit together with the nearby big cities.

Almost 80 people attended this engaging yet fun-filled occasion, out of which 29 were new students. In total, over 60 students from all across Indonesia have been admitted to study in Sweden this year.

The biggest portion of students is going to Stockholm (either KTH Royal Institute of Technology or Stockholm University). Other destinations include Uppsala, Lund, Malmö, Gothenburg, Växjö and Umeå. In order to have more insight on life in campus and in Sweden, alumni were also invited to share their experiences; hence a balanced number of 30 alumni participated in the evening, reported Ira Yulianti Purnomo. 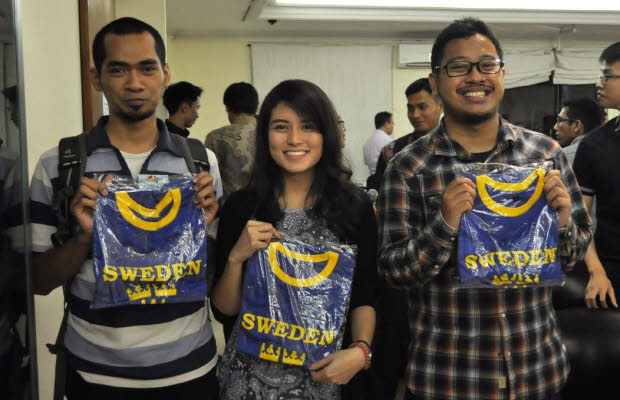