The Danes turned up in force to show support and enjoy the musical universe of L.O.C., who has bombarded Danish airwaves with hits from the streets for over a decade.

The Danish ambassador, H.E. Mikael Hemniti Winther, was seen lounging in the VIP section, Lars Lang was there and so was a whole lot of other Danes.

“It was a great concert, L.O.C. was great, and the atmosphere was great, I know more or less all the people who attended the concert, so it was one big party for me,” said Anna Bay. 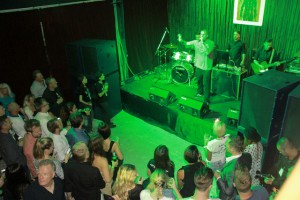 Even a few Brits were spotted in the crowd. Stuart Bishop, who earlier in his life had lived in Denmark, also enjoyed the concert.

“I do not know L.O.C.’s music that well, but I still recognized a handful of the songs he played, and have to say that he is a brilliant live performer,” Stuart Bishop told ScandAsia.

L.O.C., backed up by a live band, pleased the mixed crowed with a one-and-a half-hour of the crème of his back calalogues of hit songs.