Asia’s first LEGOLAND will mark a very successful year when it celebrates its first birthday on Sunday. The Danish concept family theme park, which has become a key driver of tourism to Southern Malaysia, is promising visitors three full days of family fun from 14th to 16th September.

One year old LEGOLAND is growing up fast and plans are already afoot to transform it into a resort comprising a Theme Park, Water Park and Hotel.

Special celebrations will take place around a giant LEGO® cake, which Park visitors have been helping to build over the past week. It is made from over 300,000 bricks and measures three metres wide.

“We are very excited about the first anniversary and look forward to celebrating it with our guests,” says Siegfried Boerst, General Manager of LEGOLAND Malaysia.

“It has been an extremely successful year for Asia’s first LEGOLAND. In the last twelve months we have added two new attractions and our visitors are enjoying the Park more than ever. As we celebrate one major milestone we are already anticipating another, because in October we will open our brand new Water Park. ”

A whole host of birthday entertainment has been planned for the birthday including dance performances, a children’s disco party and unique 3D-LEGO fireworks displays, where bricks appear to be falling from the sky. On Sunday 15th September visitors will be able to have their cake and eat it because slices of a real birthday cake will also be available. All proceeds from sales of the cake will go to Merlin’s Magic Wand, a worldwide charity for underprivileged children. Visitors to the Park can purchase the birthday cake from The Café for RM3 throughout the day.

A big birthday cake has been built to mark the day. 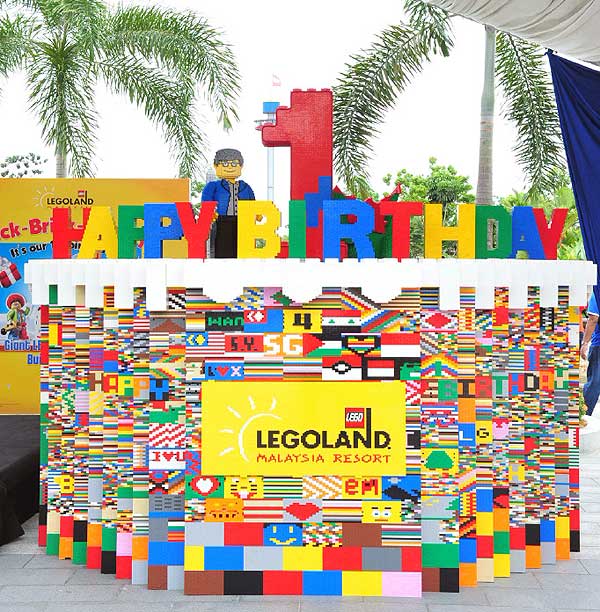