Business Sweden has appointed Martin Glaumann as Market Area Director to boost their capabilities in terms of serving Swedish companies.Business Sweden is the public-private export-promoting organisation, with a very positive outlook and growth for Swedish companies in the region. Martin Glaumann is operating out of the Singapore office. Here he presents himself and his take on what is to come. Being enticed to join Business Sweden, with a position that would take him to this region was too good to say no to. “I thought it seemed very interesting and found it to be an exciting part of the world. Also, being very similar to the west, Singapore was something of a soft-landing place for me personally since it is in the midst of Southeast Asia, with its many different faces. I have two children who are ten and thirteen so they have started school here and that has gone well. And my wife is a Pediatrician, doing some research work she has brought with her. So, for us as a family this was the perfect timing.”

Martin was headhunted from the corporate world and unsurprisingly has a management consultancy background, having worked for Arthur D. Little, first as consultant and then as Partner and Head of their TIME (Telecom, Information, Media and Electronics) practice in the Nordic region.

But even more so, he also has experience from the digital field, as well as telecom (Telia) in an earlier position.

“I think that the mix of having worked a lot with digital, done ten years in a leading management consultancy firm and with at least seven years before then as line manager, were things that made me suitable for this role.” He says he is used to Business Sweden type or work – including digitisation. “I have worked with Stockholm City during 3-4 years around their smart city strategy. And such smart city projects have relevance here. I have also worked on digitisation in nearly all industries, and done acquisition and growth strategy work. In particular I have served quite large companies and worked for both Telia Company and Arthur D. Little with developing consultancy businesses.”

In serving Swedish companies in his new role he says: “I hope I will be able to be a good sounding board here and be able to help them overcome challenges they are facing in their growth journey.”

“It will also be important for me to connect to Swedish companies back in Sweden. And I can see it as an opportunity to assist companies’ regional teams to get the right attention around important questions in this region in order for them to succeed in relation to their company headquarters – to some extent bridge that distance.” For this cause Martin will travel to Sweden regularly. “To help Swedish companies to succeed in Southeast Asia, as with all consultative jobs, it is about making ourselves available at the right moment and to then also be relevant. And relevancy for us will always be the local knowledge about the various markets, but it is increasingly important to also be relevant within other areas, For instance within digitisation, we try to increase our efforts to continue create expertise across various sectors and topics that is important for Swedish companies.

Businesses should also know that Martin’s role is not an internal one; he will be available for Swedish companies and help them in their activities – providing strategic advice, sales execution and operational support.

The strongest incentive for the creation of the Southeast Asia organisation he says is Business Sweden’s belief that there is a need from Swedish companies to have a dialogue not only about how to succeed in the individual countries but also around the region as a whole, regarding where to establish first, their development etc.

The purpose is to meet the customers more on a regional level and to collaborate effectively internally between our offices. “We clearly see a trend that the number of projects that have a multi-market perspective have increased.

“For example, if we work with one large company in one market we want to be able to re-use the competence we have developed around their market and products when we help them also on another market.”

“In Southeast Asia we will also try to become better at arranging seminars continuously, especially in Singapore, since many are based here and cover the region. Also, when serving Swedish companies with their regional office in Thailand or Malaysia, we have discussions not only around that specific market. So, it is important for us that the respective projects leaders and consultants in the various markets can coordinate and come up with ways to better serve a certain client’s needs.” 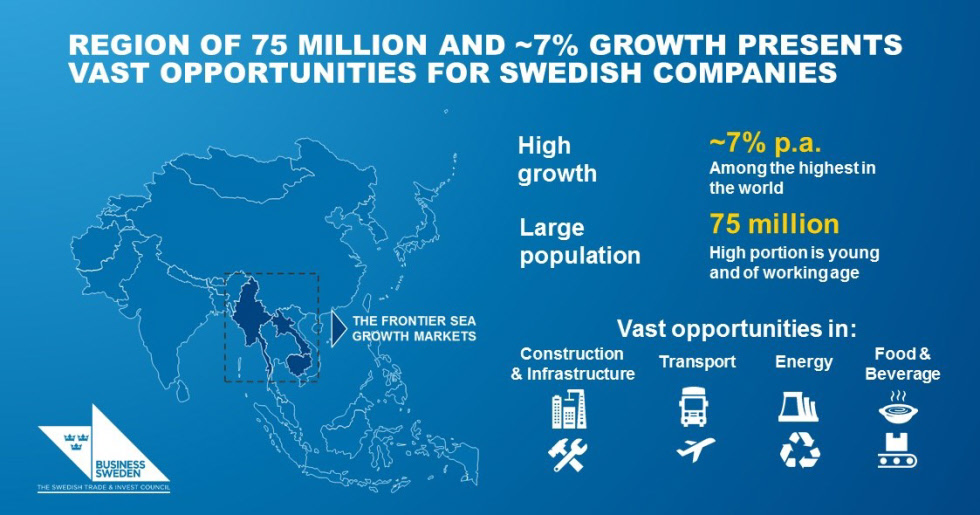 Business Sweden’s expansion in market region Southeast Asia is ultimately based on the market potential. “It has over 600 million inhabitants, a growing middle class, large infrastructure investments and a production that is going from being low cost to be more value-added focused. Vietnam is a fascinating example where the investments from companies like Samsung has enabled Swedish industrial companies to sell very advanced equipment to the manufacturing sector, where one is almost leapfrogging one step in the development,” says Martin. ”With a growth pace of 5-7 per cent in the coming years Southeast Asia will grow in size as part of the global economy. We believe that Sweden and Swedish companies could do much more in this region. We are also lower on export to Asean than many equivalent European countries. There are many companies already here, but those could act more aggressively on these markets and invest. Then they would be better positioned to take a larger market share of the growth. We think this is important and it’s my and Business Sweden’s role to emphasize that and push that debate and make Swedish companies see the opportunities.”

“We also think it’s good to have a complement to China – where the competition is tougher and tougher– within Asean where there actually are good opportunities to grow one’s business,” adds Martin.

The tools are many, and different, when it comes to helping Swedish companies increase their sales on these markets.

“For certain companies we work very concretely with sales acceleration. If a small or mid-sized Swedish company yet do not have staff on the ground, we can assist and be that company’s extended arm in these markets towards distributors or customers. We also have business incubation and operations where Swedish companies can get assistance in recruiting staff and get access to office and administrative services.”

Martin also believes that Business Sweden can make itself relevant in assisting Swedish companies a bit more long-term. “My experience from my previous work is that the management consultant business used to be focused on analysing and giving the correct answer, a recommendation. Companies probably often feel that the report lands on someone’s desk to be implemented, but it is not always the case that it gets done, especially with sometimes relatively limited resources locally. But a growing part is to assist in implementing the recommendations that one has given, and to work together with the companies in generating change. I think that our work will also shift in that direction going forward.”