The City hall of Aarhus was last week visited by representatives from the Chinese school Nanjing Qinhuai High School. The aim was to start a partnership with Aarhus’ Katedralskole, that is also a high school.

It was the first actual meeting between the two schools that took place in Aarhus, Denmark’s second largest city on Thursday 15 August.
The contact is created in a concerted effort between Aarhus’ municipality and Nanjing Foreign Affairs Office. At the meeting the two leaders from the schools met personally, and the Chinese guests had an introduction to the educational system in Denmark, particularly about the youth educations. Finally the schools signed a collaboration agreement. 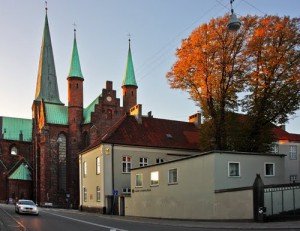 The mayor of Aarhus Jacob Bundsgaard previous visited the school in Nanjing, which is an area the city of Aarhus has special relations to.
It is the citizen of Aarhus, Bernhard Arp Sindberg’s effort back in 1937 that created the background for the good relations between the two cities.
During the Nanjing massacre nearly 300.000 Chinese were killed by Japanese army of occupation, but Bernhard Arp Sindberg rescued thousands of Chinese by giving them refuge on a factory ground, where he worked as a guard.
Later on Sindberg was honoured with the glorious title “A friend of China” and he is still celebrated as a hero in China.

The Chinese guests also visited the city hall of Aarhus and went on a guided tour with city manager Niels Højberg.