Over 14 million people were affected by the typhoon in the Philippines. “The Philippines is now in the middle of a critical process of reconstruction. Unfortunately only around 40 % of the amount sought by the UN appeal to support early recovery has been provided. 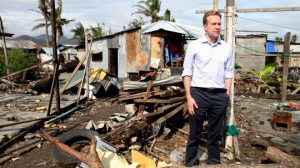 It is crucial that the international community continues to support the recovery efforts, and Norway is therefore increasing its allocation by a further NOK 50 million, to NOK 255 million,” said Minister of Foreign Affairs Børge Brende, speaking in Tacloban on 8 January 2014.

This will make Norway the third largest contributor to to the UN appeal for emergency relief and reconstruction efforts following the typhoon Haiyan. Today, two months after the devastating typhoon hit the country, Mr Brende visited some of the most seriously affected areas, on the islands of Samar and Leyte.

“I am here to show that Norway and the international community have not forgotten the Philippines. Now that the acute emergency relief phase is over, it is important that priority is given to providing enough resources for reconstruction of the communities. The Philippines is affected more and more frequently by extreme weather events and natural disasters. By focusing on prevention, preparedness and risk reduction, societies can be spared a great deal of suffering and lost resources,” said Mr Brende.

Mr Brende had meetings with local authorities and members of local communities. He visited several projects and met representatives of Norwegian Church Aid, the Norwegian Red Cross, the UN Office of the Coordination of Humanitarian Affairs (OCHA), the World Food Programme (WFP), and the Food and Agriculture Organization (FAO), that are involved in the emergency relief and reconstruction efforts supported by Norway. According the UN, over 4 million people have been internally displaced as a result of the typhoon, and over 1 million homes have been completely or partly destroyed.

“It is quite clear that the typhoon has caused massive damage and devastation. The need for shelter and opportunities to earn income is particularly pressing. So it is encouraging to see that the Norwegian funds are being put to good use, the reconstruction work is under way and the local people are starting to return to their normal lives,” said Mr Brende.

Tomorrow, Mr Brende will discuss Norway’s extensive engagement in the Philippines with representatives of the Philippine Government, in the capital city Manila.