On 11 June Norwegian tidal energy company Flumill, as one of the top 10 companies with advanced technologies in the field of renewable energies, was awarded the Blue Sky Award at the Shenzhen Low Carbon City Forum. Mr. Espen Rikter-Svendsen, the Consul General of Norway in Guangzhou, accepted the prize on behalf of Flumill.

On the 11 June2014 Flumill, one of several Norwegian companies doing successful business in China, made itself visible at the Shenzhen Low Carbon City among a dozen of international companies with unique innovations in the renewable energy field. The company’s tide turbine technology was granted the “Blue Sky Award” as one of the ten advanced technologies with “Global Top Investment Scenarios to Apply New Technologies for Renewable Energy Utilization”.

The “Blue Sky Award” is an international contest organized by the UN Industrial Development Organization (UNIDO), Shenzhen People’s Government and a few other organizations. It is designed to lead a large scale of renewable energy applications to developing countries, in order to ease the supply shortage of conventional energy and the impact of greenhouse effect on global climate, human and environment.

More than 100 companies applied for the Award this year and 22 of them were selected from the first round. This Top 10 Award is significant to Flumill, which is seeking cooperation partners globally, especially in China. Flumill has been assisted in its entry into China by Innovation Norway Beijing Office. 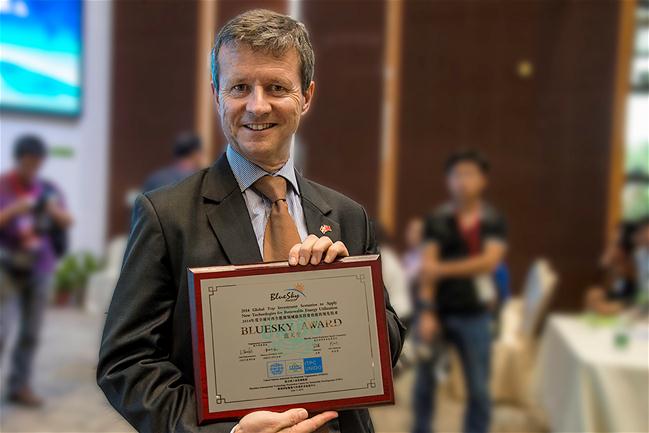 “It is very good to be visible here at the Shenzhen Low Carbon Forum, an important meeting place for renewable energy industries”, said the Consul General. According to the organizer, the “Blue Sky Award” calls for worldwide collection of the advanced technologies with most industrial investment value in the field of renewable energy, which are evaluated by experts from around the world and eventually awarded by the “Blue Sky Award” Evaluation Expert Committee. The award-winning technologies will be promoted to the whole world through the domestic and foreign news media and the United Nations Industrial Development Organization Network.

Besides Flumill, outstanding companies from China, US, France and other countries also received awards for their advanced technologies.

The “Blue Sky Award” has been successfully awarded four times since 2005, and hundreds of technologies from more than 20 countries such as Germany, US, Canada, Russia, Norway, Belarus and Japan have participated in the contest. Up to 2011, 38 winning technologies and 40 nomination technologies were effectively promoted into industries.