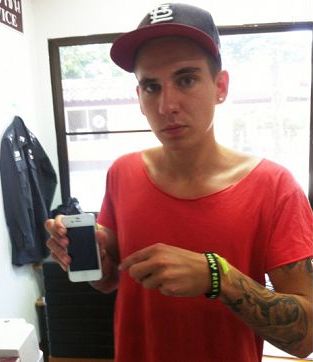 On 30 September Karon Police in Phuket arrested two ladyboys for robbing an 18-year-old Swedish tourist of cash, a credit card and and iPhone 4s, The Phuket News reported. Duty officer Pol Lt Ratthapol Deethongon told The Phuket News that the robbery took place on Sunday 29 September around 2.45 pm. On that day, the tourist, Robin Hedberg, reported that he was walking with a friend along the road in front of Club Med in Kata, Lt Ratthapol said.

“Two ladyboys riding a motorcycle stopped and asked if they wanted a massage. The tourists declined, so the two ladyboys took phone, B5,000 in cash and a credit card and drove off towards Patong.

“We asked the tourists for details about the ladyboys and their motorcycle. They could remember only the type and the colour. But we checked security camera footage and were able to track [the robbers] to the area around the OTOP market in Patong.”

Police moved in and arrested the duo, Numpol Poochai and Pairat Chanwiang, who promptly confessed. “They said they had spent all the money and had also used the credit card, then thrown it away. But officers were able to recover the iPhone, which was returned to the tourist.”