Rasmus A. Kristensen arrived in Jakarta in September 2017 appointed as the new Danish Ambassador to Indonesia replacing Casper Klynge (who prematurely left in the summer to become Denmark’s first ever Tech Ambassador). While Ambassador Kristensen has worked many years for the Ministry of Foreign Affairs (MFA) in Denmark this is his first posting as Ambassador, bringing along his wife and their daughter. Rasmus has previously been posted for four years at the Danish Embassy in Beijing. After having spent the last four years in Denmark, he is now happy to be back in Asia. Mr Kristensen also used to work in the MFA’s Asia Department where his focus had been on North East Asia. “But I also got the opportunity to visit Southeast Asia, including a trip to Jakarta in connection with the preparations for COP15 in Copenhagen.”

“I have also worked for the Danish Trade Council focusing on how to engage emerging economies, including Asian countries like China, Korea and Indonesia. It’s a region I am very fond of and it’s great to be back to work here!” says the ambassador. A few years ago, the new ambassador also got a “teaser” of Jakarta and Indonesia when he participated in the State Visit of Her Majesty the Queen of Denmark to Indonesia.

“I was heading the international department in the Danish Ministry of Energy, Utilities and Climate, responsible – among other things – for starting up the bilateral energy cooperation with Indonesia. In that context, I accompanied our minister who took part in the State Visit.”

That visit of Denmark’s Head of State, he says, was important, and symbolic for upgrading the bilateral relationship. “Our two countries are far apart geographically, but there is no doubt that Indonesia has a lot of commercial potential. However, Danish exports to Indonesia has not been as strong as you might expect for a country with 265 million people and which in 2030 will be the world’s fifth biggest economy.

“Putting Denmark on the agenda of Indonesia and vice versa was successful. And it established a good foundation for further cooperation in the following years, including in the area of energy, which I am very familiar with myself. Another area is the environment where we are starting a new sector-based cooperation. A Danish advisor has arrived at the Embassy this summer and we are going to focus on waste – another major challenge for Indonesia.”

Since then the two countries have also entered into agreements on agriculture and healthcare. All these, as well as the maritime sector, are areas where Denmark will be able to help Indonesia not only from its own policy experience, but also in the form of technological solutions.

The new ambassador says that he will try to keep the momentum from the State Visit, so that they not only expand the cooperation to more areas, but also deepen it. The recent visit to Indonesia of the Danish Prime Minister is another milestone in the bilateral cooperation.

“In areas such as energy and the environment we have funding from home in terms of government-to-government cooperation, but we also have a very strong private sector that would be able to provide some of the same solutions that have worked so well in Denmark.”

Mr Kristensen’s most recent position was Head of Department for Public Diplomacy, Communication and Press at the Danish Foreign Ministry; hence he can share some insights into how the MFA’s public diplomacy and outreach is being handled in the digital era. Perhaps unsurprisingly he is in favour of digital outreach, a clear trend among most foreign missions nowadays.

“In the last couple of years there has been increased emphasis on digital communication and social media, as a tool to reach a bigger audience in host countries. This is an area where also other foreign ministries are beefing up their activities,” he begins.

“There is an element of competition in terms of visibility for a country, so I think it’s important both at mission level as well as headquarters to keep abreast of developments – particularly within social media and digital communication.”

The embassy in Jakarta already has a high profile on social media and uses it as a strategic communications tool. Almost all ministries and key influencers in Indonesia are active on various digital platforms, such as Instagram and Twitter, which gives you plenty of opportunities to reach out to such targets.”

However, the ambassador thinks that in terms of social media, it is important to look at what platforms are popular in one’s host country. “In Indonesia, we use various accounts–Facebook, Twitter, Instagram and Linkedin–partly because these reach different audiences. There is a generation thing, but there are also geographical differences in terms of users. And a lot of things go on outside traditional social media, such as on WhatsApp, with closed groups where you can spread messages. Thus, I think it’s important for our missions abroad, and for my work here, to really look at the local context and then experiment with that, also bearing in mind who we are trying to reach. And here we have a focus on decision-makers, but also on younger people.”

Facebook, he says, is for the general public and it could make sense to publish in multiple languages. “But if you use other platforms to target the urban youth, I think English is fine, because that’s also how they communicate and then the impact will be just as good as with Bahasa Indonesia.”

“Personally, I am certainly going to invest in learning Bahasa Indonesia to the extent possible. When I was in China I made a lot of effort to study Chinese, which proved very useful in my work. I also think it matters here the more you can communicate in Bahasa, in some ways.”

The communications department, Mr Kristensen previously ran, also did some cooperation with Danish Trade Council on how to best communicate trade and export-related issues: “A lot of that has to do with actually reaching out to Danish companies about the services that we can provide globally, and to also make them aware of opportunities abroad for exports and investments.” 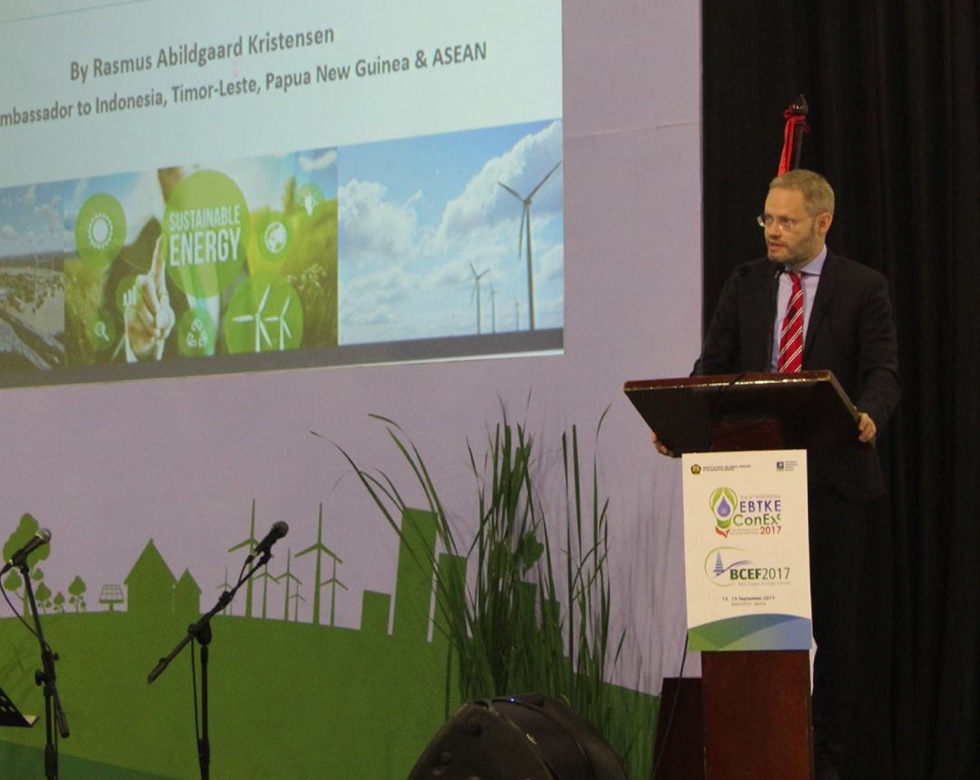 “Otherwise we have a number of companies coming here on their own where we help them set up programmes or meet business partners or local decision-makers that will be relevant for their business activities. We have a team of advisers here at the Embassy, which is supported also by their colleagues in the MFA in Copenhagen who also do a great job in trying to reach out to companies that may not be here yet; be it Indonesia or the region at large. Those already having activities out here we have a close dialogue with.”

“In South East Asia the Danish Trade Council has a regional cooperation. As such, the Embassy here in Jakarta is cooperating closely with our colleagues in the Philippines, Malaysia, Thailand, Singapore and so forth. So we are also trying to develop an element of specialisation regarding Southeast Asia. For instance, we have people here in Jakarta with solid experience with environment and energy issues because that is core area of expertise for us here and they are helping their colleagues in some of the other countries.”

Coming back to the key sectors Denmark is focusing on in Indonesia, Mr Kristensen says: “It’s also clear from my initial time here as Ambassador that these are the areas where Indonesians also understand and recognise that Denmark has something unique to offer that other countries may not have to the same extent. Therefore, it also makes a lot of sense to build on these strongholds in our commercial, political and economic cooperation with Indonesia.”

“In an economy like this with a strong dominance of the state–at least in strategic sectors–I think it is important that we have wide-ranging government-to-government co-operation, be it in healthcare, food or environment and energy, which will also benefit our companies as well as Indonesian partners and stakeholders” he adds.

The ambassador furthermore points to growth potential with a broader dimension: “We are seeing now a growing Indonesian middle class with more appetite for Danish design and consumer goods; such as food, designer furniture and products like LEGO. So in that sense there is a solid and increasing business potential. But Indonesia is not an easy market – it’s and inward-looking country with a slightly protectionist undercurrent, and that has to be dealt with. On the other hand it’s a very big market and it’s developing in a way that should be of great interest to Danish companies from a wide variety of sectors. So, it requires presence here and some persistence to really penetrate it and get access to those many consumers. But a lot of companies have already successfully been doing that.”

All photos: Embassy of Denmark in Indonesia