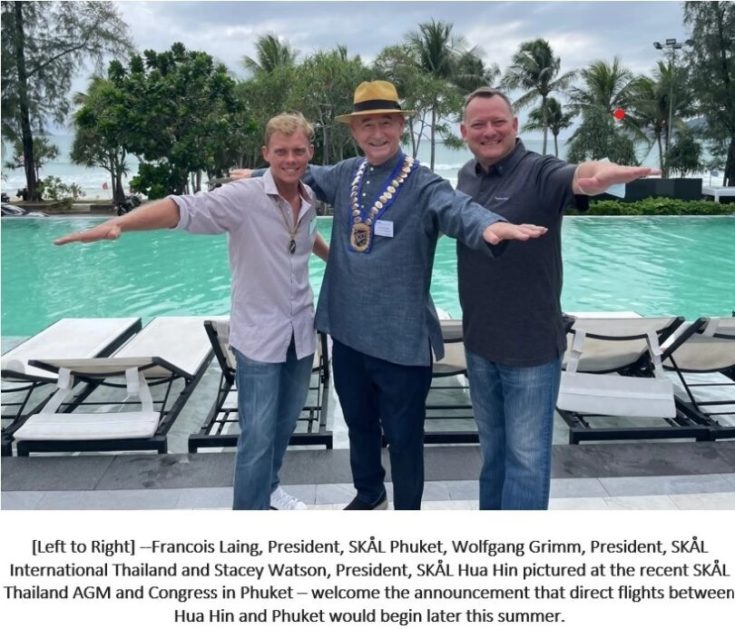 Following the announcement this week by Phoenix Aviation that it will launch direct flights between Hua Hin and Phuket later this summer, tourism organizations such as SKAL International Hua Hin have thrown their support behind the move which they believe will increase Hua Hin’s appeal to international visitors seeking multi-destination holidays in Thailand.

Speaking at this weekend’s Skal Thailand Congress in Phuket, the President of SKAL Hua Hin, Stacey Walton welcomed the news and said: “Hua Hin and Phuket are two of the country’s leading tourism and golf destinations and I foresee that this flight will be extremely popular with both domestic and international travelers and help us to rebuild our industry following the challenges of the past few years.”

Current travel time between the two destinations by road or by air via Bangkok is around 8 hours which will be significantly reduced, as well as offering onward international connections through Phuket international Airport which is currently served by flights from Europe, Asia and Australia. Udorn Olsson, Chairman, Phoenix Aviation Thailand said, “The connection between Phuket and Hua Hin serves both international and domestic flights. The people of Thailand will also benefit from the linking of these two important destinations, bringing Hua Hin to a wider audience. Hua Hin has long been a favorite leisure destination for Thai people, but we’re very excited about bringing Hua Hin to the world, and Phuket is only the beginning of our plans.”
The new service will address a growing demand for flights between these two key destinations. 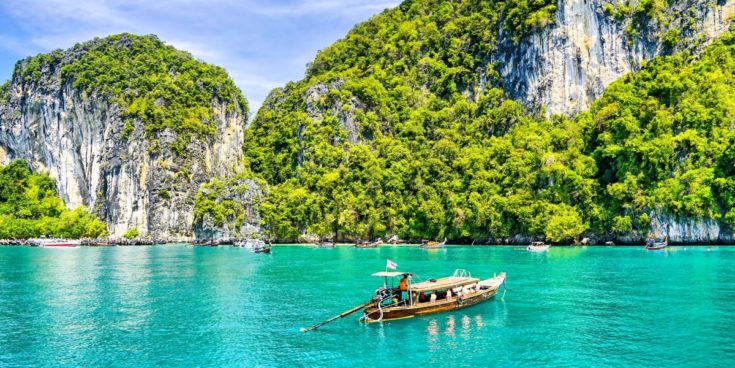 Phoenix Aviation’ CEO, John Laroche said, “Our surveys and focus groups amongst leading hospitality industry members, golf tour operators, tourism bodies and government agencies have made it abundantly clear that there is a huge demand for this service, well above other domestic flight preferences.”

That interest has been reconfirmed after early media announcements and social media posts in Hua Hin received an overwhelming interest and support.

Mr. Laroche added, “The consultative process is ongoing with frequencies, arrival/departure times and target groups still to be confirmed.”

Seasonal considerations mean that the flights are likely start just prior to the coming high season, with mid-to-late September now favored. This is aimed at providing essential planning time for travel operators of tour groups, including golfers, with bookings becoming available from the end of June 2022.

Ticket prices for the twice-weekly, one-hour flight are likely to be priced at around the THB2,000 mark. Stacey Walton added, “We’re really excited about this announcement, it’s been in the pipeline for some time, and I believe now that Thailand has reopened to tourism, pent-up demand will see a surge in international visitors with golfers at the forefront, eager to maximize on Thailand’s superb choice of world-class courses, as well as major golf events in the two destinations.”

This initiative is driven by the Phoenix-plan with the support of travel agencies and tourism partners. Community support in both Hua Hin and Phuket is a vital element to ensure success before stage two can be realized with a recognized carrier having the confidence to come on board with scheduled flights.

Skal Hua Hin and Cha Am is a chapter of the global travel and tourism organization Skal International – the world’s largest international association uniting all branches of the travel and tourism industry. It currently has 12,500 members worldwide with clubs operating throughout Thailand in Bangkok, Chiang Mai, Hua Hin, Phuket, Krabi and Samui.