Cambodia’s efforts to tackle threats of climate change thereby received a new boost with additional financial support from Sweden as well as the European Union, and United Nations Development Programme.

“With this continued support, we expect that the government with relevant ministries, local authorities, academia, and civil society organisations will be better equipped with tools for climate change mainstreaming and implementation of climate change responses in Cambodia”, said Ambassador Anna Maj Hultgård.

She hoped the new financial support will result in “stronger efforts both at the national and sub-national levels in building more effective local climate change responses and improved overall country resilience.” 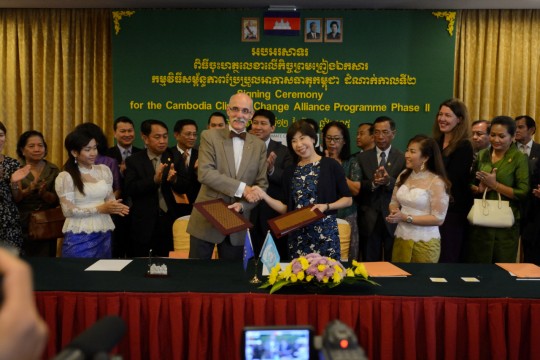 “The second phase is very much focused on implementation of the strategies and plans that were put together during the first phase,” said the Minister of Environment and added that “the programme will also put a strong focus on the development of the technological and human resources required for the climate change response, through grants for research, and partnerships with the education sector.”

The EU provides 6 million Euros, the largest share of the financial package, followed by US$3.8 million from Sweden and US$1.15 million from UNDP.

Mr. Jean-François Cautain said that, in addition to assisting Cambodia in addressing climate change issues, the EU also plans “to commit 149 million Euros until 2020 in the natural resources management sector” of Cambodia.

“Working together we can surely achieve even more in our common vision and efforts to improve Cambodia’s response to climate change to sustain growth and build resilience for the most vulnerable people as they work to escape poverty,” Ms. Setsuko Yamazaki, UNDP Country Director, said at the ceremony.

Recent studies have consistently identified Cambodia as one of the countries that are most vulnerable to climate change due to its heavy reliance on agriculture, the large proportion of the population residing in the low lying areas and weak capacity and funding to cope with unpredictable and extreme weather events such as droughts and floods.

The CCCA was established in February 2010 as a multi-donor programme to channel resources for climate change initiatives. Donors during the first five-year phase included the EU, Sweden, Denmark, and UNDP. Since its inception the programme has supported the government in developing climate change policy framework and implementing 20 grassroots projects aimed at testing measures to improve resilience of rural communities most at risk to climate change. In late 2013, the government unveiled the Cambodia Climate Change Strategic Plan to serve as the guiding principle for promoting low carbon and climate-resilient development for the next 10 years.