In early December 2015, on the historic ground at room 105 in Metropole Hotel Hanoi, Swedish Ambassador Camilla Mellander inaugurated a brass plaque to commemorate the very first office of the Swedish Embassy in Hanoi.

It was exactly here where the Swedish Embassy was first located when it opened in 1970. Sweden was the first western country to establish diplomatic relations with Vietnam 46 years ago. 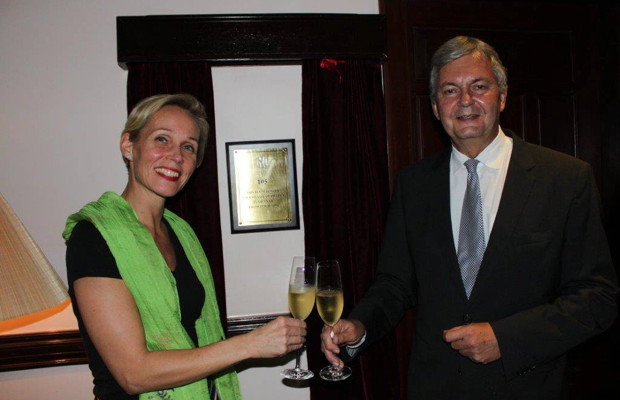 All staff members of the Embassy in Hanoi and key members of Metropole Hotel joined this special event. In her short speech at the event, Ambassador Mellander said: “We will today put up a brass plaque to commemorate our first office. I am very proud and happy to finally see this come into reality. This is a symbolic sign of the long and friendly relationships between our two countries Sweden and Vietnam”.

Over the years, the hotel guest list over has included many presidents and prime ministers, the Swedish King and Queen and the former Swedish Prime Minister Carl Bildt among them. A few other embassies have also been located here, as this was a base for press and diplomats during the war.

“A big thank you to Mr Franck Lafourcade, General Manager and the management team at Metropole for helping us realise this.”