Swedish CENTEC Vietnam, the centre for environmental technology cooperation between Vietnam and Sweden, will close down at the end of 2013.

The organisation was tasked with identifying and supporting partnerships between Vietnam and Sweden to strengthen a more sustainable development in the fields of environment, energy and climate change. 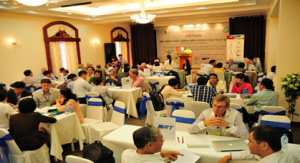 “But the opportunities for sustainable business partnerships between Sweden and Vietnam will remain,” according to CENTEC team, headed by Tomas Hertzman in the organisation’s last newsletter.

During the almost three years of its existence, CENTEC has facilitated 24 partnerships involving 50 Swedish and Vietnamese partners.

“The partnerships initiated by CENTEC will continue working together contributing mutual benefits in both countries.”

Several of the Swedish companies believe that being present in the Vietnamese market will create revenues within the coming five years. The sum of the estimated annual revenue lies between 180 to SEK240 million in five years.