A team led by the Swedish Global Health Ambassador Dr. Anders Nordström together with Ann Måwe and Ulrika Ferenius from the Swedish Foreign Ministry accompanied Tomas Lundström from the Swedish Embassy to Yangon on November 18 and 19. 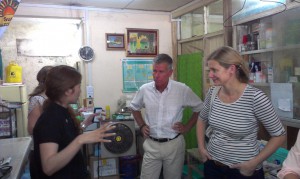 The team visited both a public and private clinic, and it was astonishing to see the vast difference on both resources and quality between the two, where the private clinic had 40-50 patients a day whereas the public clinic had just a few patients daily. Myanmar is now at junction, where it has for a long time had a severely under capacitated public sector with many private initiatives, where the country have to find ways of integrating the private sector with the public sector. This is of course pose a huge challenge for the Ministry of Health, which despite a four-fold increase in health expenditure still is considered to be one of the lowest in the world.

The team met with other donors and the UN working in the health sector in Myanmar. Some of the challenges pointed to is that the country is so vast and that there are many places that are very hard to reach with health services. Another complicating factor is the lack of basic data, which makes it difficult to make strategic and long term choices.

The Global Health Ambassador and Tomas Lundström went up to Nayi Pyi Taw for a meeting with the Minister of Health, Dr Pe Thet Khin. The Minister and Anders have met several times in the past and only last month in Stockholm. It was a very good and fruitful discussion where the Swedish strategy for the coming 5-year period for Myanmar (adopted in July 2013) was highlighted and in which maternal- and child health is a priority. The Minister was acutely aware of the many obstacles and with its limited resources and that the balance between public and private sector provision of health services need to be agreed upon.

Both parties agreed that a sequenced road map needs to be developed as there are many things needed to be done at the same time but must be done at the countries own pace.

The minister asked Sweden for continued support and where the Ministry is seeking Swedish expertise. There is potential for another follow up mission in which the Swedish Global Health ambassador could be accompanied by the leaders from WHO, WB and other invited health experts.

BIRON®, All That Glitters The Eco-Friendly Way

What are the 4 Main Types of Health Insurance for Medical Needs?