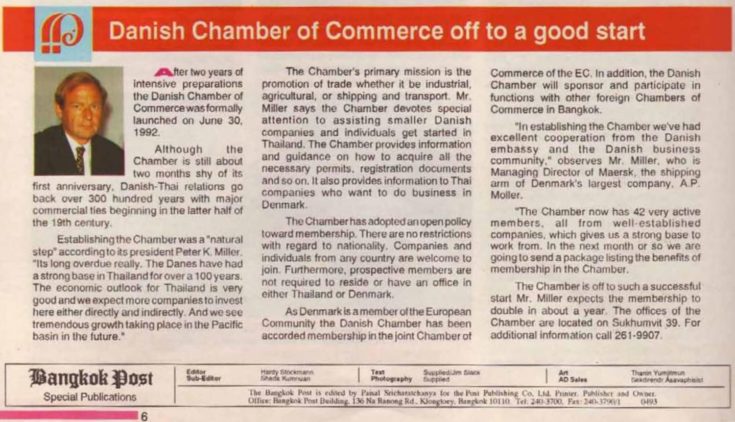 As part of the Embassy of Denmark in Bangkok’s ‘Did you know’ series, the Embassy shares interesting facts about the establishment of the Thai-Danish Chamber of Commerce.

On this day, the inaugural meeting of the Danish-Thai Chamber of Commerce (DTCC) was held at the Danish embassy in Bangkok.

The idea of a Danish-Thai Chamber of Commerce, conceived by Danish Ambassador Mogens Isaksen, Peter Miller, Maersk Bangkok Branch, and Poul Weber, Berli Jucker Public Co., Ltd, had first been launched in May 1991 and in June 1992, the Chamber received approval from the Thai Ministry of Commerce. A few months later, the founding meeting took place.

The chamber was established with a purpose not only to support and increase collaboration between Danish and Thai companies but also to further promote and expand trade between Thailand and Denmark.

The 400-year history between Denmark and Thailand started with trade in 1621 and as such, DTCC continues to build on the shared Thai-Danish history, strengthening trade between the two countries today and in the future. Are you the Danish Embassy in Bangkok’s new Consular Officer?