Saturday 26th January the Scandinavian Women’s Association (SWA) in Singapore organised an evening out in Little India (an ethnic neighborhood found in Singapore) to see and learn about the Hindu celebration Thaipusam. The event was fully booked and 40 persons participated. 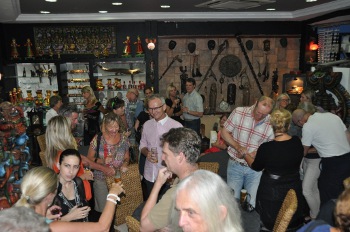 Jan Lund from Asia Adviser told the attendees about the background for this peculiar ceremony and we got to see the documentary “Thaipusam” which he has produced together with Ib Søby from DK4. Kirsten Nordahl had made the arrangements for an excellent  traditional Indian dinner at the “Choor Bazaar” Restaurant. Although many of the participants did not know each other, the talk around the tables quickly became lively.  At about 10 pm participants left for the Sri Nivasa Perumal temple a little further up the Serangoon Road, guided by Jan and Kirsten. The street was already quite crowded and barriers placed along the road for the procession to pass unhindered. There was an unmistakable air of expectation in the area, and many people wearing orange robes and sarongs. As they moved closer to the temple, the crowd became thick and the noise from inside carried quite a way. It took a few minutes of pushing and shoving in an excited crowd before they were able to enter the chaos of the temple grounds. The sights, smells and noise as the devotees prepared for their procession were quite overwhelming and unlike anything most of the guests had experienced before. The scene, with religious ecstasy, wild yelling, upturned eyes and piercing of chins and tongues, was a bit frightening, but also interesting. As there were smiles all around, much laughing and singing, the contentment and peacefulness of many of the participants also pointed at the proceedings being controlled and deliberate. All seemed to be in order and the way it should be.

Once a year 20.000 Tamils in Singapore celebrate Thaipusam. The festival  is a tribute and thanksgiving to the Hindu god Murugan who protect the religious and fulfill their wishes. This happens by the ritual of bringing milk from the Srinivasa Perumal Temple on Serangoon Road to the Thendayuthapani Temple on Tank Road. All of the devotees are dressed in yellow or orange colors as they are associated with Lord Murugan. Some of the devotes pierce their bodies. They are in a trance throughout the procedure, and there is no bleeding. Their ardent faith, together with the support of family and friends who help with rhythmical drums and shouting, makes the pain tolerable. Many of the devotees pierce their tounge and cheeks, this is to symbolically give up their ability to speak and offer their full concentration to the Lord Murugan. Some of the male devotees carry a large, heavy canopy which is anchored to their flesh with small hooks. To endure this they have prepared for weeks with prayer, vegetarian diet and celibacy to purify the soul. 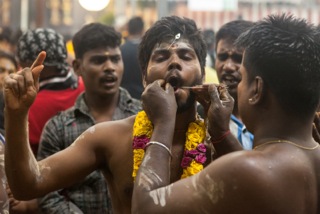 Preparing food and offering drinks or any assistance to fellow devotees is also considered a way of fulfilling religious obligations. They walk barefoot in the procession with a pot of milk carried on their head or just in their hands. Some are doing penance by shaving their head, this is often children or youngsters.

Thanks to Jan Lund  and Kirsten Nordahl who made this a night to remember.