Asia House was the first Head Quarters of East Asiatic Company in Denmark. The building remains an impressive statement to the solidity of the EAC.

Sitting on a high solid granite plinth, this house really radiates solidity –and that was undoubtedly also the intention. The House on India Quai in the Freeport of Copenhagen was built in 1898 as the first headquarter of the newly founded East Asiatic Company, and an upstart company of some magnitude will always try to signal that it intends to stay. From his time in Siam, the co-founder of EAC, H.N. Andersen, was most aware of this.

At that time the architecture in Denmark was influenced either by Italian Renaissance e.g. the new banks (straight out of Florence) or by the National Romantic Movement, e.g. The Copenhagen Town Hall. Trends come and go, but Asia House is somewhat unique, a ‘stand alone’ house. That it is symmetric in design is nothing special; what makes it stand out are mainly two factors: The very high quality of materials and craftsmanship and the modest ‘decorations’ in a mix of Romanesque and Gothic style, especially the frontispieces over doors and windows. The hard burned bricks come to their right mainly because of the bond style or pattern used.

I believe that the original EAC Warehouses on Charoun Krung Road in Bangkok have also been designed by the EAC ‘House Architect’ Gotfred Tvede. Tvede was originally trained as a mason, later he graduated as an architect from The Academy of Fine Arts. Like Andersen, he started ‘bottom-up’, and his sense for craftsmanship never left him. Around the turn of the century his architectural firm was the largest in Denmark and he couldn’t supervise all details of the works of his firm himself. One of his trusted architects Valdemar Schmidt was in daily charge of Asia House and influenced the final drawings.

Wood, hardwood
When the heavy door closes behind you, the picture changes dramatically, absolutely no stones any more. Now it is wood, mostly hardwood, everywhere in the house, from the ceiling to the floor and many places in between. Impressive, and again, the highest level of craftsmanship. I don’t think it has been necessary to change or repair the carpentry much during all these years.

After the turn of the century EAC expanded rapidly and what was an adequate headquarter when built became crammed and too small. In 1908 the new and very characteristic domicile in Holbergsgade was inaugurated. But in the spring of 1908, shortly before the move a young man named Ernst Mazar de la Garde[1] (son of the postmaster in Ribe) visited. He had applied for a job in the company’s teak forests in Northern Siam and was called for an interview:  His observations give a lot of atmosphere.

Eyewitness account
When entering the office Ernst Mazar de la Garde immediately saw that “it was much too small to contain the office staff the company already then needed”, nevertheless:

“The office was marked by an unmistakable, impressive dignity, I can almost say distinction. I was interviewed by the Head of Office, later Managing Director, Mr. Madsen Mygdal who was dressed. in a frockcoat; he questioned me for a long time and finally asked whether I was married. I showed him my ring-less finger – That’s good, he said with a smile. The conditions in the teak forests are not suitable for white women. Furthermore the salaries are not big enough for that.”

“With an excuse Mr. Madsen Mygdal left me. He walked towards a door, about which I at once got the impression that it wouldn’t give access to all and everybody. I noticed a certain deference in his attitude, when he knocked the door; and when he carefully and silently opened he delivered a deep bow.”

“A moment later he came out and told me that Etatsraaden[2] wanted to see me. A moment later I stepped over the great man’s threshold”.

Photo tour
The many photos and captions provided along with this article serve as a virtual tour of the house on India Quai. Then you will get an impression, also of details and items. Thereby we hope it will be possible also to sense the atmosphere of the house in its heydays – and today. 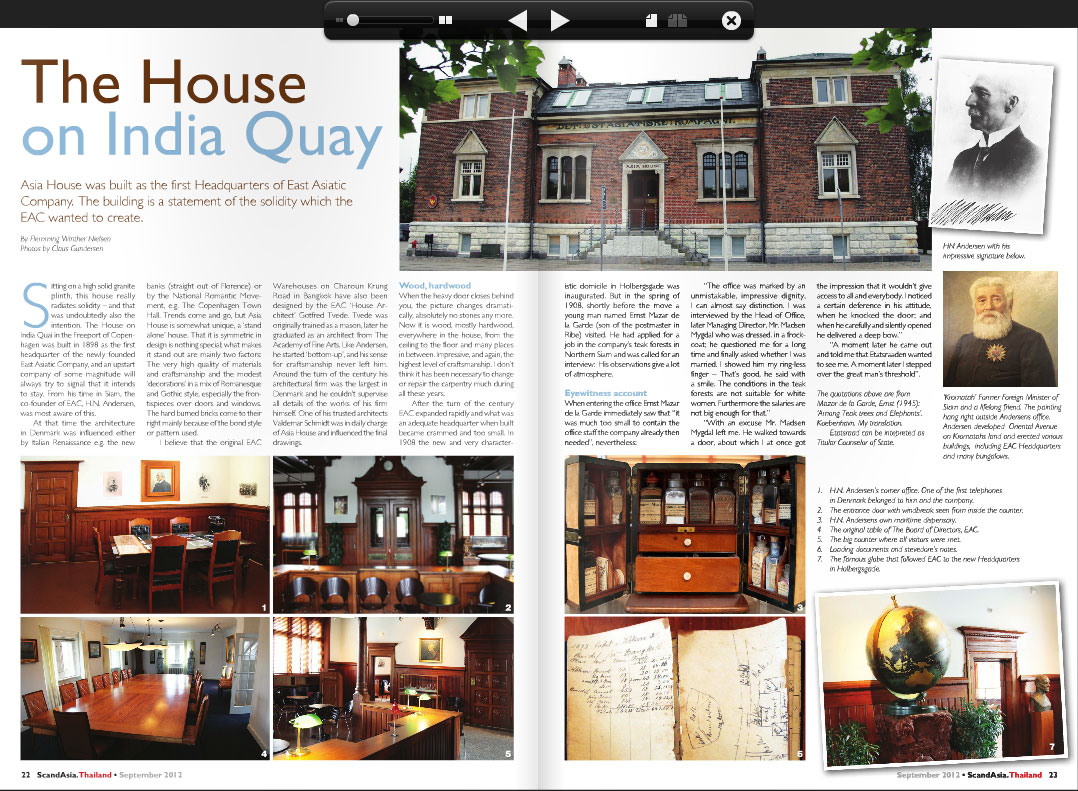 [1]  The quotations are from: Mazar de la Garde, Ernst (1945): ‘Among Teak trees and Elephants’. Koebenhavn. My translation.