Deputy Prime Minister Hoang Trung Hai made the proposal while receiving the State Secretary to Minister for Trade Gunnar Oom in Hanoi on September 18.

The government of Vietnam will create the best possible conditions for foreign investors, including those from Sweden, to do business in Vietnam for mutual benefit, Hai assured his guest.

He acknowledged Sweden’s recent activities to boost bilateral relations, including increasing high-level visit exchanges and encouraging businesses to invest in Vietnam, aiming to increase two-way trade by 10-20% annually over the past six years. 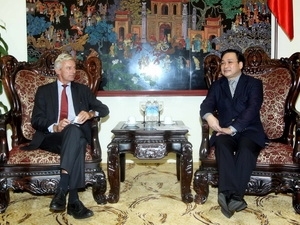 He proposed both countries will work closely together to successfully celebrate the 45th anniversary of diplomatic ties in 2014.

He said Sweden will seek new models of cooperation with Vietnam as soon as its ODA programme for the Southeast Asian nation ends in 2013.