On occasion of the 150th anniversary of the Danish composer Carl Nielsen the prestigious Ho Chi Minh City Ballet Symphony Orchestra and Opera on 9 October hosted a concert in his name in the Ho Chi Minh City Opera Theatre. 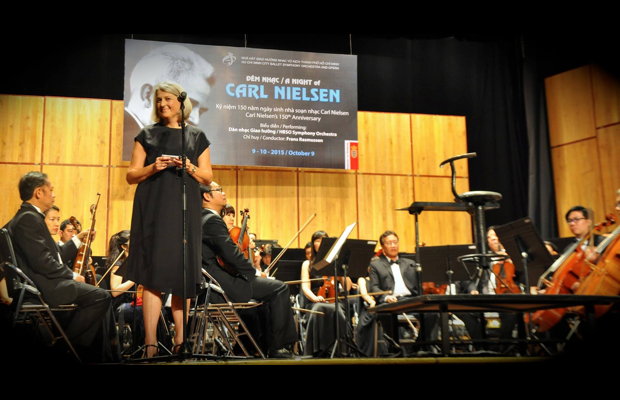 “Culture and art are important elements in our long-term relationship with Vietnam. We believe that culture and art contribute tremendously to the building of mutual trust and understanding between our two countries and our peoples” said Danish Ambassador Charlotte Laursen in her speech, opening the evening.

Carl Nielsen was a pioneer composer of Denmark in the early 20th century. Previously, his works did not receive proper acknowledgement and care from the world’s community but recently people have paid much attention to his music, especially works for orchestras.

Nielsen had completed his last piece of the six-piece collection symphony in 1925 before composing two more concertos for flute and clarinet for the Copenhagen Wind Quintet and died at the age of 66.

The audience enjoyed an evening with enchanting tones in an interesting combination of Danish-Vietnamese classical music under direction of the Danish conductor Frans Rasmussen. The show featured Vietnam’s leading clarinet artist Dao Nhat Quang who graduated from the Moscow Tchaikovsky Conservatory.