From the over 100,000 festival-goers at the 2015 edition–the 45th– of one of Europe’s most legendary and long-lasting music festivals, Roskilde Festival, held in early July, pee was collected by Danish farmers to used in the production cycle of beer! Yes, you read this correctly! This urine is to be used to fertilize malting barley for future beer brewing! 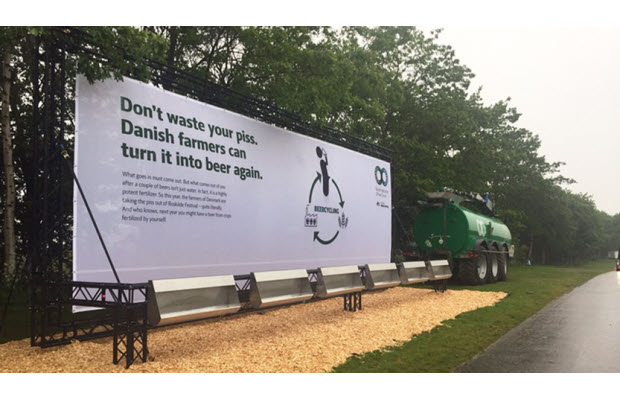 The Danish Agriculture & Food Council (DAFC) and the Roskilde Festival have teamed up for this initiative called ‘beercycling’ project, known as “From piss to pilsner”.

Urine was collected in specially designed storage tanks and transported to nearby fields where it will be used to fertilize malting barley. If everything turns out as planned, guests at the Roskilde Festival 2017 will be served beer fertilized with their own urine.

“Beercycling is about changing our approach to waste, from being a burden to being a valuable resource. Today, the huge amount of urine produced at the festival is having a negative impact on the environment and the sewage system and treatment plant in Roskilde. Beercycling will turn those many litres of urine into a resource,” says Leif Nielsen, head of communication for the DAFC.

Leif Nielsen sees great potential in beercycling and is confident that the project will be a success.

“I think most people can see the reason and the fun behind making a personal contribution to beer brewing instead of merely producing waste. Everyone is talking about sustainability and the beercycling project proves that sustainability is not just a buzzword used by the Danish food industry. Also, the fact that rock music is involved will help us get our message across,” he adds.

Henrik Rasmussen, Managing Director of the Roskilde Festival, comments on the collaborating with the DAFC: “The beercycling project is certainly a fascinating proposal for a sustainable solution where urine isn’t just sent down the drain, but becomes a useful resource. It is a project which extends beyond the festival itself and it underlines that the Roskilde Festival is a fantastic laboratory for testing new sustainable solutions that could benefit society,” he says.