A Chinese navy fleet arrived in Copenhagen on 18 September 2015, beginning a five-day visit to Denmark for the very first time. A Chinese naval fleet has previously never visited Danish waters.

Chinese Ambassador to Denmark Liu Biwei, Danish Commodore Torben Mikkelsen, representatives of Danish Navy and overseas Chinese and students in Denmark, attended a grand welcoming ceremony at Nordhavn harbor for the arrival of the fleet.

In his speech, Ambassador Liu said Fleet 152’s visit is not only a highlight of the 65th anniversary of Sino-Danish diplomatic ties but also a demonstration of the sustained and in-depth development of the two countries’ comprehensive strategic partnership.

“I believe that through the extensive exchanges between the two sides we will further enhance mutual understanding and friendship and continue to promote our bilateral and military relations,” Liu said.

For his part, the fleet commander, Senior Colonel Wang Jianxun said the Chinese fleet came to Denmark to enhance understanding, trust and cooperation between the two countries and armed forces, especially between the navies of the two nations. 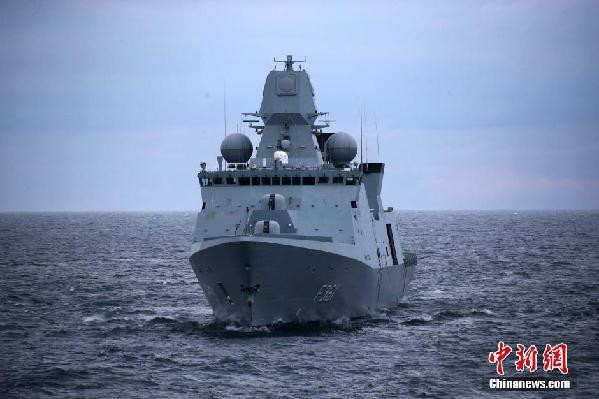 During this visit, the Chinese naval servicemen and their Danish counterparts will hold such activities as a mutual visit to each other’s warships and a football friendly. The Chinese vessels will also be open to local visitors.

Fleet 152 started its round-the-global voyage after a four-month mission of convoy in the Gulf of Aden and sea areas of Somalia. Denmark is its third stop following Sudan and Egypt.