While the VIPs arrived guests enjoyed drinks, mingling and an exhibition of Danish products, designs, and chocolates, while Bicycle Barista (a ‘Profit for Purpose Social Enterprise’, focused on empowering entrepreneurship in the Specialty Coffee industry) served coffee.

The official programme began at 7 pm when the MC Deepika Shetty welcomed all the guests and invited the Ambassador of the Royal Danish Embassy, Singapore to give here speech. Ambassador Dorte Bech Vizard welcomed the Minister, the Members of Parliament and the Ambassador to Denmark couple and all other guests to the celebration.

She continued to announce that it was a triple celebration: the Danish Constitution Day, the World Environment Day and the strong relations between Singapore and Denmark.

Then the Ambassador explained the Danish day: “Unlike Singapore, Denmark does not actually have a national day. The birth of Denmark as a nation was a gradual development, which can be traced back more than a thousand years. But Constitution Day is the closest such thing we have.”

“Today, we commemorate the signing of the Danish constitution in 1849, which ended absolute monarchy. It’s a celebration of our democracy – not only as a political system but as a way of life,” H.E. continued.

Her speech then focused on the new hyped concept and Danish word ‘hygge’: “The Danes are modest people, so it has come as a surprise to us, to experience a recent growth in international interest in the Danish way of life.” The Danish word was included, only beaten by ‘Brexit’ and ‘Trumpism’ by British Collins Dictionary among the most talked about new words of 2016.

“I translate hygge as ‘pleasant togetherness’, as it reflects the Danish national spirit, good and bad. Danes like to feel good together, also “by having low power distance, being very informal and consensus-seeking,” said the Ambassador and continued: “On the more negative side, we have to admit, that hygge can also mean avoidance of disagreement and settling for the lowest common denominator. Here we could definitely benefit from taking a leaf from Singapore’s book and better celebrate skills and talent.”

Turning to the UN World Environment Day the Danish Ambassador highlighted the fact that the United States had “regrettably” decided to exit the Paris Accord on Climate Change. “Nevertheless, we are heartened to see that other countries have not followed suit. We commend Singapore for a very swift announcement of its continued support for the pact and for its steady national efforts to curb climate change. Denmark and the rest of the EU also stand by the Paris Accord and will not lower our national commitments. Copenhagen has set an ambitious target to become carbon neutral already by 2025. Denmark as a whole aims at reaching the target by 2050.”

“And we are serious about it, even tonight, where we have succeeded in making this the first carbon neutral national day event in Singapore,” Dorte Bech Vizard added.

She also highlighted and compared with Singapore the fact that Denmark has created an infrastructure that enables green mobility, including cycling. “An astonishing 50 percent of people in Copenhagen commute to work or school by bike every day. Cars are down to 9 per cent. So profound is this change that it has given rise to another new international word, ‘Copenhagenize’. Today, Copenhagenize is used as a concept in urban planning and design for encouraging cycling. Ang Mo Kio model bicycling town is an example of Copenhagenizing right here in Singapore. Singapore is serious about improving cycling through important infrastructure developments. We are impressed to see bicycle lanes being incorporated in the upcoming North-South corridor development. This is good news for cycling in Singapore.” To further highlight the many things that Denmark and Singapore have in common the ambassador pointed to their size, being rich countries but with no significant natural resources, their openness to trade, and importantly, sharing the same desire to future proof our economies.

“We seek to address future realities early to ensure we keep our top positions and leave our countries robust, richer and with an even better quality of life for our future generations. And in this endeavour, we look for inspiration from one-another as we each chart out our own unique development course.”

“This past year again, we have had large number of visits and delegations both ways. Most notably, Deputy Prime Minister Tharman Shanmugaratnam visited Denmark in March 2017 with a SkillsFuture delegation to study the Danish approach to lifelong learning and adult training.”

“I am pleased to note, the cooperation has expanded with new areas such as smart urban development, health care and liveability.

The ambassador mentioned that two collaboration agreements had recently been signed in Singapore, which will kick start collaboration on Smart Cities Living Labs and Financial Technologies.

Dorte Bech Vizard then thanked all the sponsors who hade made it possible to organise the event.

We are fortunate to have a large and thriving Danish business community in Singapore. It spans across Shipping and Maritime, Green and Smart City Solutions, Engineering and Clean Tech, Healthcare and Danish design, lifestyle and quality consumer goods, food & beverage, banking, relocation services and even defence!

She then read out the names of all the premium sponsors and also thanked Mandarin Oriental with the Danish General Manager Christian Hassing and his team, “for accommodating us on your beautiful Harbour Terrace tonight with authentic Danish food and hygge.”

Singapore singer Liwani then performed the Singaporean national anthem, followed by the Ambassador proposing a toast to the President of the Republic of Singapore. 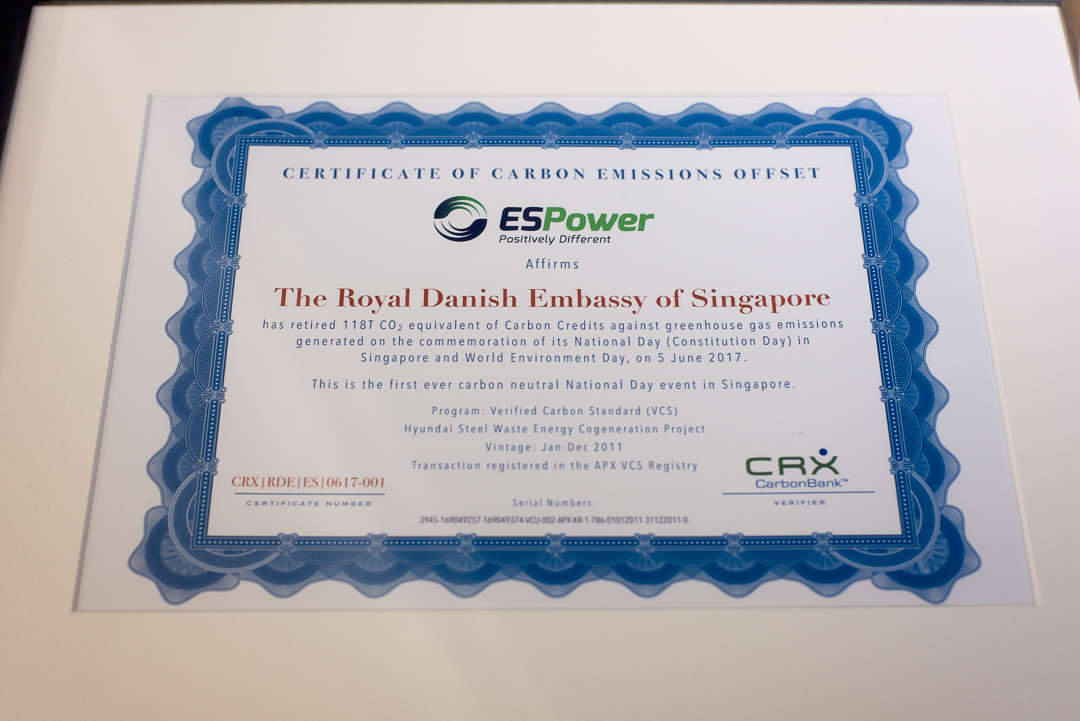 Following a toast in Champagne, ES-Power presented a Carbon Neutral Certificate to the Danish Ambassador, certifying that the event did not leave any carbon footprint. It was in fact the first ever carbon neutral national day event in Singapore!