In 1907, the Danish Captain of The Royal Siamese Gendarmerie Erik Seidenfaden was in charge of a huge convoy moving the Thai Governor-general out of the now French Cambodia. 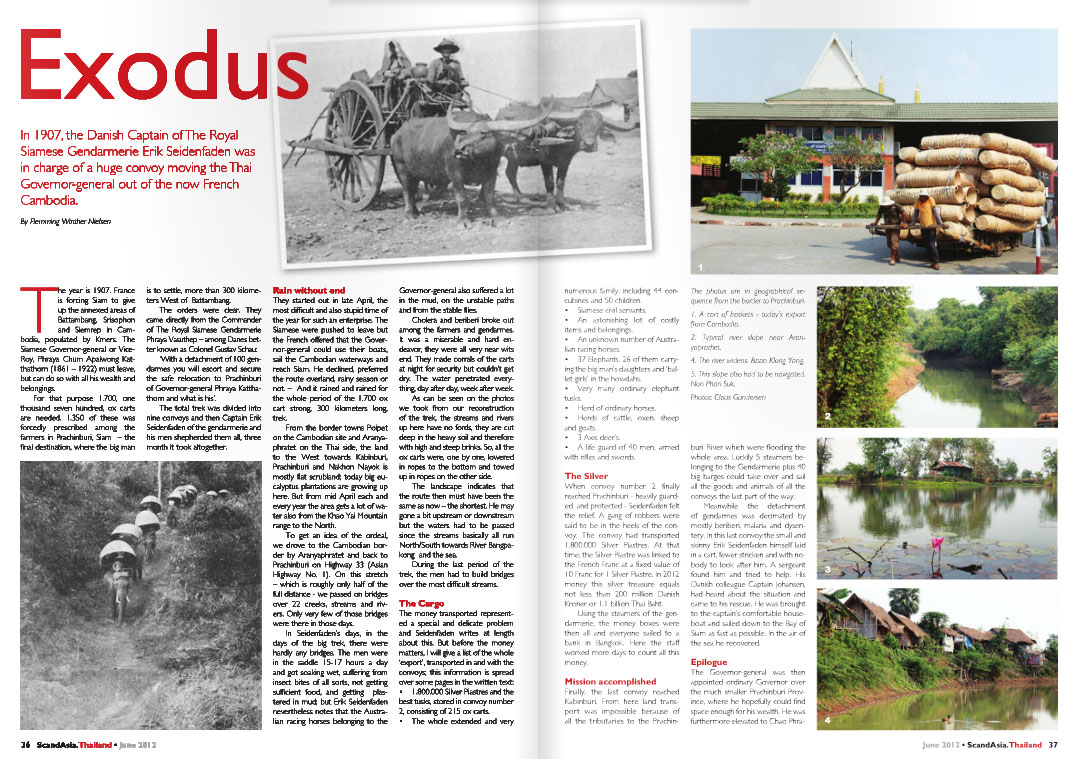 The year is 1907. France is forcing Siam to give up the annexed areas of Battambang, Srisophon and Siemrep in Cambodia, populated by Kmers. The Siamese Governor-general or Vice-Roy, Phraya Chum Apaiwong Katthathorn (1861 – 1922) must leave, but can do so with all his wealth and belongings.

For that purpose 1.700, one thousand seven hundred, ox carts are needed. 1.350 of these was forcedly prescribed among the farmers in Prachinburi, Siam – the final destination, where the big man is to settle, more than 300 kilometers West of Battambang.

The orders were clear. They came directly from the Commander of The Royal Siamese Gendarmerie Phraya Vasuthep – among Danes better known as Colonel Gustav Schau:

‘With a detachment of 100 gendarmes you will escort and secure the safe relocation to Prachinburi of Governor-general Phraya Katthathorn and what is his’.

The total trek was divided into nine convoys and then Captain Erik Seidenfaden of the gendarmerie and his men shepherded them all, three month it took altogether.

Rain without end
They started out in late April, the most difficult and also stupid time of the year for such an enterprise. The Siamese were pushed to leave but the French offered that the Governor-general could use their boats, sail the Cambodian waterways and reach Siam. He declined, preferred the route overland, rainy season or not. – And it rained and rained for the whole period of the 1.700 ox cart strong, 300 kilometers long, trek.

From the border towns Poipet on the Cambodian site and Aranyaphratet on the Thai side, the land to the West towards Kabinburi, Prachinburi and Nakhon Nayok is mostly flat scrubland; today big eucalyptus plantations are growing up here. But from mid April each and every year the area gets a lot of water also from the Khao Yai Mountain range to the North.

To get an idea of the ordeal, we drove to the Cambodian border by Aranyaphratet and back to Prachinburi on Highway 33 (Asian Highway No. 1). On this stretch – which is roughly only half of the full distance – we passed on bridges over 22 creeks, streams and rivers. Only very few of those bridges were there in those days.

In Seidenfaden’s days, in the days of the big trek, there were hardly any bridges. The men were in the saddle 15-17 hours a day and got soaking wet, suffering from insect bites of all sorts, not getting sufficient food, and getting plastered in mud; but Erik Seidenfaden nevertheless notes that the Australian racing horses belonging to the Governor-general also suffered a lot in the mud, on the unstable paths and from the stable flies.

Cholera and beriberi broke out among the farmers and gendarmes. It was a miserable and hard endeavor, they were all very near wits end. They made corrals of the carts at night for security but couldn’t get dry. The water penetrated everything, day after day, week after week.

As can be seen on the photos we took from our reconstruction of the trek, the streams and rivers up here have no fords, they are cut deep in the heavy soil and therefore with high and steep brinks. So, all the ox carts were, one by one, lowered in ropes to the bottom and towed up in ropes on the other side.

The landscape indicates that the route then must have been the same as now – the shortest. He may gone a bit upstream or downstream but the waters had to be passed since the streams basically all run North/South towards River Bangpakong and the sea.

During the last period of the trek, the men had to build bridges over the most difficult streams.

The Cargo
The money transported represented a special and delicate problem and Seidenfaden writes at length about this. But before the money matters, I will give a list of the whole ‘export’, transported in and with the convoys; this information is spread over some pages in the written text:
• 1.800.000 Silver Piastres and the best tusks, stored in convoy number 2, consisting of 215 ox carts.
• The whole extended and very numerous family, including 44 concubines and 50 children.
• Siamese civil servants.
• An astonishing lot of costly items and belongings.
• An unknown number of Australian racing horses.
• 37 Elephants. 26 of them carrying the big man’s daughters and ‘ballet girls’ in the howdahs.
• Very many ordinary elephant tusks.
• Herd of ordinary horses.
• Herds of cattle, oxen, sheep and goats.
• 3 Axis deer’s.
• A life guard of 40 men, armed with rifles and swords.

The Silver
When convoy number 2 finally reached Prachinburi – heavily guarded and protected – Seidenfaden felt the relief. A gang of robbers were said to be in the heels of the convoy. The convoy had transported 1.800.000 Silver Piastres. At that time, the Silver Piastre was linked to the French Franc at a fixed value of 10 Franc for 1 Silver Piastre. In 2012 money this silver treasure equals not less than 200 million Danish Kroner or 1.1 billion Thai Baht.

Using the steamers of the gendarmerie, the money boxes were then all and everyone sailed to a bank in Bangkok. Here the staff worked more days to count all this money.

Mission accomplished
Finally, the last convoy reached Kabinburi. From here land transport was impossible because of all the tributaries to the Prachinburi River which were flooding the whole area. Luckily 5 steamers belonging to the Gendarmerie plus 40 big barges could take over and sail all the goods and animals of all the convoys the last part of the way.

Meanwhile the detachment of gendarmes was decimated by mostly beriberi, malaria and dysentery. In this last convoy the small and skinny Erik Seidenfaden himself laid in a cart, fewer stricken and with nobody to look after him. A sergeant found him and tried to help. His Danish colleague Captain Johansen, had heard about the situation and came to his rescue. He was brought to the captain’s comfortable houseboat and sailed down to the Bay of Siam as fast as possible. In the air of the sea he recovered.

Epilogue
The Governor-general was then appointed ordinary Governor over the much smaller Prachinburi Province, where he hopefully could find space enough for his wealth. He was furthermore elevated to Chao Phraya with the name Aphaiphubaet [the romanized spelling varies from source to source]. He had a guest house built by the river. In fact a two storey castle in French rococo with a dash of baroque, as can be seen. It was waiting for king Chulalongkorn to visit, but he never came.

Nowadays it contains a very well assorted pharmacy, dealing in all kind of herbs. The Pharmacy and the castle are well worth visiting.

There is so much more to be told about Erik Seidenfaden, (1881 – 1958) who retired as major from The Royal Siamese Gendarmerie in 1920. He later became Member of the Board, Siam Society, then President and finally honorary member. He wrote much recognized articles within the field of Ethnology and related areas, plus guides to various towns in Siam – but he started as a farm hand on the Manor House ‘Estruplund’ in Jutland. More about all this in a coming article.