Ambassador Kai Sauer and Director General Rida Mulyana of New, Renewable Energy and Energy Conservation, signed the work plan for 2014 for the Energy and Environment Partnership Program. The EEP program has entered its final stage and will be completed by September this year. 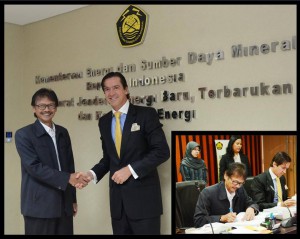 EEP Indonesia is a joint collaboration between the Government of Indonesia and the Government of Finland to promote renewable energy, energy efficiency and investment in clean energy technology in Indonesia. The programme commenced in April 2011 and it is works at central level in Jakarta and in two defined target provinces, namely Central Kalimantan and Riau. EEP Indonesia aims at supporting wider provision and use of renewable energy, with a focus on bioenergy, and combating climate change.

Energy and Environment Partnership with Indonesia (EEP Indonesia) programme, financed by the Ministry for Foreign Affairs of Finland (MFA) and implemented in cooperation with the Directorate General of New, Renewable Energy and Energy Conservation of the Ministry of Energy and Mineral Resources of Indonesia (Directorate of Bioenergy), provides funding for renewable energy, especially bioenergy related projects, studies, capacity development and information sharing in the provinces of Central Kalimantan and Riau. In addition EEP Indonesia contributes to the development of renewable energy friendly policies both in the programme target provinces and at the central level in Indonesia.

EEP Indonesia collaborates with other renewable energy related programs operational in the country and elsewhere in Southeast Asia, especially with the Energy and Environment Partnership with the Mekong Region Countries. This programme, called as EEP Mekong, is also funded by the Ministry for Foreign Affairs of Finland.

The total budget for the EEP Indonesia programme until 2014 is EUR 4 million. Joint initiatives, for instance public-private partnerships and projects implemented in cooperation with local communities and, to enhance technology transfer, collaboration with Finnish organizations are encouraged.

Both Indonesian and international NGOs, companies, public and private initiatives, research institutes and consulting companies have been eligible to apply for EEP project financing. The financed initiatives cover following types of activities: