All the Nordic countries as well as many other foreign countries have a bilateral agreement with Thailand allowing prisoners to be transferred to their home countries after serving a certain amount of years, depending on the length of penalty the prisoner has been given. But despite the bilateral agreement, prisoners should not expect to get out if they have a fine and cannot pay it.

Light is always shining brightly in the hundreds of prisons in Thailand. Simply because fights and assaults happen so frequently that it is too dangerous to even turn the light off. Even though it is a violation against human rights.

In general, human rights are not the biggest focus point in Thai prisons. People are cramped up in overcrowded cells, some places being forced to unwillingly spoon with strangers. Contact with friends and relatives means sitting on opposition sites of a ditch, five or ten meter apart, and yelling to each other because the phones are often broken and everyone is trying to yell louder than all the others who are also yelling to speak with their loved ones.

In some of the prisons, prisoners explain that food consists of a bowl of rice and some soup, three times a day. Once a week five chickens are split between approximately 500 inmates. They get barely any meat, no vegetables, no fruit. Just rice and water.

These are the conditions in the prisons of Thailand. Welcome! 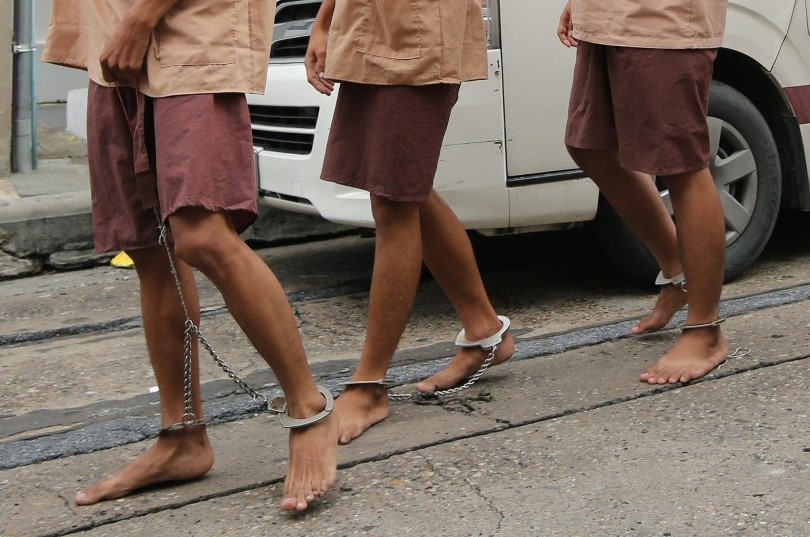 Agreement does not give the right to transfer back home

According to a bilateral agreement between Thailand and Denmark, a Dane imprisoned in Thailand can request a transfer to a Danish prison after serving four years of a time limited sentence in Thailand. Receiving lifetime, prisoners will have to wait eight years to be able to ask for transfer.

Being transferred back home not only lets you be closer to friends and family, it entails a huge improvement in living conditions too.

Four years in a Thai prison can be worse than any form of imprisonment you could experience in Denmark. But just because there is an agreement between Thailand and Denmark, prisoners are not guaranteed to automatically be transferred back to Denmark after four or eight years.

First of all, it takes a lot of time consuming paperwork. The prisoners will also need to have their case brought for a Danish judge. However, the Thai authorities will have to accept the judgement in absentia given to the prisoner as reasonable.

“In the end, it is the Thai authorities that make the decision. When the crime has taken place on Thai grounds, it is Thailand that gets the last call. The Danish authorities do not have a say in that,” says Birgit S. Kondrup-Palmqvist, Consul at the Embassy of Denmark in Bangkok.

Less than a square meter

According to statistics published by the International Federation of Human Rights, the prison occupancy rate in Thailand is 224 percent.

Imagine sharing a cell with between 30 and 100 people and having just one single square meter of space to you. That is approximately how much allocated floor space the average person in a Thai prison has got. In some prisons the occupancy rate even passes 300 or 400 percent.

Prisoners will typically sit inside the overcrowded cells for 16 hours every day. And for the eight hours left, they will sit on the ground in a just as overcrowded yard.

There is not much to do for prisoners serving time in Thailand. No opportunity to work out, no books, no activities at all. Just one television in a corner running in Thai, a language most of the foreigners does not understand.

No money, no transfer

A prisoner’s life can go on like that for a very long time if they have received a fine along with their penalty which they are not able to pay. The way the Thai prison system is build, even a four year sentence for a mild crime can turn into a fate of spending the rest of your life behind bars.

It has not always been this way. It was just two years ago that this law was implemented. Although based on a Thai person, the law also applies to foreigners imprisoned in Thailand. When committing a crime and receiving a penalty, it often means spending time behind bars and receiving a fine. The fine can be anything from half a million to sixteen million Thai baht, which is a lot of money for someone who is imprisoned and unable to earn any kind of money. It is a lot of money even for relatives to help the prisoner pay. But if the prisoner hopes to get out, or even being transferred to his home country, he must pay up.

Having spent four years in a Thai prison does not get you anywhere as long as there is still a fine to pay off. With an unpaid fine, prisoners will not be allowed to transfer to a prison in their home country, nor will they be released at all until the last baht has been paid. That is the way things have worked since the laws were changed two years ago.

Birgit S. Kondrup-Palmqvist from the Danish Embassy explains that there are prisoners who had nearly served their four years and were ready for a transfer as the new law was implemented. As they were so close to serving the rest of their penalty in a much nicer place and closer to their relatives, they were suddenly denied transfer because of their unpaid fines. Earlier, a Royal pardon allowed these prisoners to be transferred or released, but suddenly not anymore.

Along with people from the EU, Canada, United Kingdom and Nordic countries, Birgit S. Kondrup-Palmqvist has started a working group to change this.

Arguing that it is a law based upon a Thai person and not a foreigner, who does not have the same opportunities as a Thai to get the money together by selling his car or house, she hopes to be able to make a change and get more prisoners back to their home countries.

Furthermore, in the Danish laws, fines are not part of the punishment when it comes to drug crime and thereby the Thai judgement cannot be converted directly into a Danish judgement. This should be considered when the Thai Committee for Transferring of Foreign prisoners decides on the individual cases.

Starting the working group on 10 January 2017, Birgit S. Kondrup-Palmqvist is hoping to see a change of the Thai ruling before the autumn of 2017.

“It is in fact better for someone to receive lifetime in jail, than receiving a penalty with a fine they cannot pay, but only in connection with talking of the possibility of being transferred to your home country, of course. The best is always to stay out of trouble,” she says.

“With a lifetime penalty the prisoner might be transferred after eight years and there is no fine to be paid. But with a time limited sentence with a fine, you will only get out once the fine is paid.” 2 Comments on “Got no money? Don’t expect to leave Thai jail”