Biking through the streets of Jakarta to promote a more climate friendly way of commuting, signing agreements on government cooperation on water and waste management, talking interreligious dialogue and women in Islam, promoting youth engagement and protecting rainforests. Ulla Tørnæs, Danish Minister for Development Cooperation, had a busy schedule on her four day visit to Indonesia.

Starting out in Harapan Rainforest in central Sumatra, Indonesia, Ulla Tørnæs experienced how locals use and take care of the rainforest every day, as she was showed around on a hike through the forest. The minister even got to spend the night inside the forest and was very pleased to experience how Danish support is appreciated on close hand.

Since 2011, Denmark has been supporting the conservation of Harapan Rainforest and the Ecosystem Restoration Concession concept.

“We are all affected by climate changes, and a big sinner in this field is deforestation. I am pleased to see, that the money they receive from us here, is used very wisely. Both to preserve this unique rainforest, but also to develop it. They are creating a foundation for ecotourism, so the forest in its original and unique form can generate income for the locals,” said Ulla Tørnæs on Facebook. While there, Ulla Tørnæs was also accompanied by the Danish Ambassador to Jakarta, Casper Klynge, who signed the implementation agreement for the coming six months’ Danish support to Hutan Harapan in collaboration with Ani Mardiastuti, Chairwoman of Burung Indonesia, an organization guarding Indonesia’s wild birds and their habitats through sustainable development.

The goal of the agreement between the Danish Embassy and Burung is to secure the livelihood of local communities and stop further deforestation in the Harapan Rainforest.

To mark the new phase of the cooperation, the Danish Minister also planted a Bulean tree, one of the most endurable and valued tree sorts. On Tuesday 2 May, Tørnæs attended an Energy Seminar in Indonesia where she and the Indonesian Minister for Energy and Mineral Resources jointly launched a map of Indonesia’s wind resources. The map shows an enormous potential for utilizing wind in Indonesia and thus also for the further strategic sector cooperation between Indonesia and Denmark, says the Embassy of Denmark in Indonesia. The seminar further focused on the Danish, Indonesian collaboration in the energy field, and both ministers held speeches, commenting on the achievements of the innovative government partnership between the two countries, which is now in its second year.

The Energy Seminar sets the ground for further emphasis on Indonesia’s vast potential in renewable energies, through discussions on regulative frameworks and cost-efficient solutions.

Together with youth representatives from the Embassy’s #Ambassador1Day programme and selected youth organization, the Danish Minister for Development Cooperation discussed serious topics with the young people as they sat down for lunch, mainly focusing the discussion on the importance of young people in the development of society. In the afternoon, the Minister and her delegation went on a boat expedition by Jakarta bay to witness one of the most challenging environmental issues that Indonesia is currently facing; waste accumulation and contamination of the water environment by plastic debris.

Indonesia is the second largest emitter of plastic, only surpassed by China.

“Fortunately, the Minister of Environment in Indonesia is showing great leadership on the area. We must take better care of our oceans. Plastic belongs in the bin,” said Ulla Tørnæs. In the evening the Minister attended a dinner with the topic of tolerance and pluralism, interreligious dialogue and women in Islam. 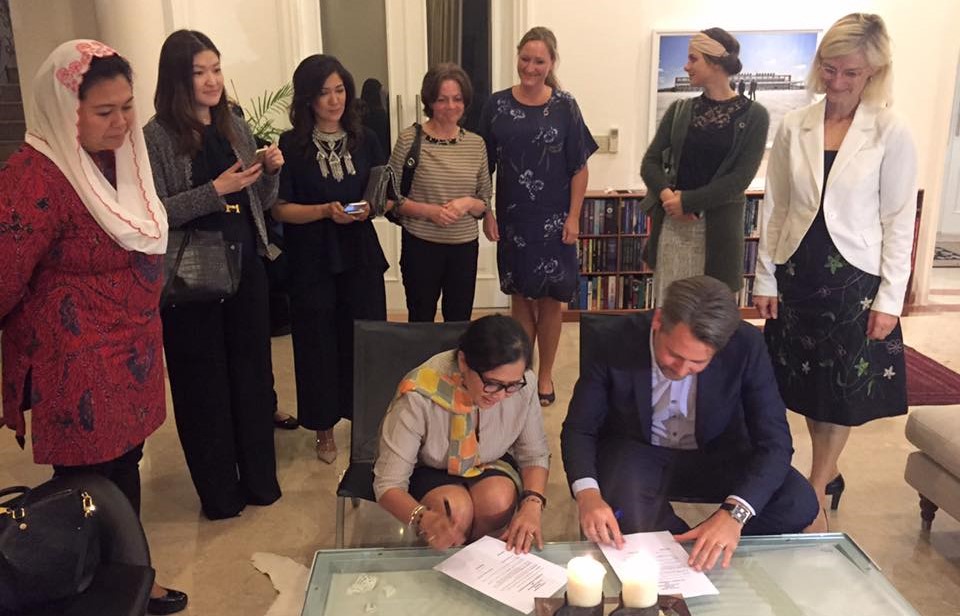 During the diner, the Minister for Development Cooperation witnessed the signing of a Letter of Intent on a project between the Danish Embassy in Jakarta, the Wahid Foundation and Asia Foundation. The project will focus on interreligious dialogue and women in Islam and will strive to promote tolerance among religions and advance women’s rights in Islam.

On her last day in Indonesia, the Minister shared one of her great passions with the Indonesian; bicycling.

Traffic is always hectic in Jakarta, especially in the morning. However, that morning the street scene looked at bit different as all the cars, buses and scooters were joined by a large group of bicyclists, participating in the newest edition of the #VikingBiking event series, co-arranged by Bike2Work Indonesia and the Danish Embassy. The minister herself was among the bicyclists as they, like true Danish Vikings, defied the warm weather and heavy traffic and rode all the way from Raffles Hotel to the Governor’s office where they got refreshments and were greeted by the Governor of Jakarta.